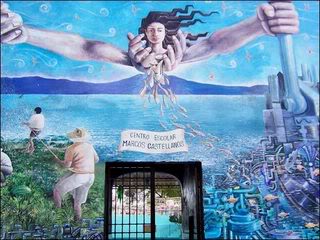 Alice and I started thinking and planning retirement not long after our marriage in 1989. In the early 1990’s it looked like we probably would need to find an economical place to retire, because Alice’s business, Vulcan Incorporated, was struggling against tough competition, and I was struggling to stay employed during the period of defense cutbacks following the collapse of the Soviet Union. As we say in defense contracting, “Peace is Hell.”

That’s a joke, you hyper-sensitive Leftists.

Our motto in the Air Force was, "Peace is our Profession."

It wasn't a joke.

Anyway, we started developing our retirement criteria. Besides inexpensive, we wanted a great climate, and all the comforts of home. We also were looking for an area where we could lead an active lifestyle, and enjoy an interesting culture. Many parts of the world were attractive, but we quickly ruled out many places too.

Europe was variously too expensive, and in Eastern Europe where it was less expensive, the winters were too cold. On the basis of the five years I lived in England (1970-1975), I would have voted for the United Kingdom or Ireland as my number one choice regardless of weather or cost of living, but Alice would never be happy with the cold, damp winters. Or the occassional cold, damp summers.

Africa was interesting, but the political instability and threats of intense sporadic violence scared us off.

We felt the same about Asia, plus Alice vetoed any Muslim nation because of their treatment of women. That eliminated one of my favorites, Turkey, where I had lived a year across the Sea of Marmara from Istanbul in 1964-65.

Australia and New Zealand scored high marks with us, but cost of living wasn’t much lower than in the United States, and the vast distances to travel to visit family and friends were daunting.

South America was a great unknown to both of us, but the political instability and social problems in South America were constantly in the news, and left us with a vague feeling of uneasiness about living there.

Canada was out. Climate.

Central America? We don’t know much about it, it’s probably a lot like Mexico, except it’s further away.

A friend told us of a marvelous bed & breakfast, Los Artistas (now under new owners), operated then by two gay fellows, the “two Steves,” in Ajijic, on the shores of Lake Chapala, near Guadalajara. As confessed in an earlier post, Mixed Company, Alice and I have a stereotypical prejudice about gays. We believe they are the best Bed & Breakfast proprietors, although we have stayed at many “straight” B&B’s we thought were great too. It’s just that we have never had a bad experience at a B&B operated by gays.

I hope someone will read this and be offended and let me know, thereby validating another of my stereotypical prejudices that there is nothing complimentary I can say about gays that won’t offend someone, usually a straight Liberal.

The Guadalajara area had already been brought to our attention because of its year around mild climate and its large colony of American and Canadian expatriates and retirees.

Right after Christmas 1995 we left for a week in Mexico. We were picked up by taxi from the Guadalajara airport and whisked to Los Artistas in Ajijic. Our hosts were warm and congenial, the room “The Studio” was very nice, and the grounds were well kept and inviting. We soon found the meals were excellent also. Everything lived up to our stereotypical expectations.

Ajijic was a marvelous combination of small Mexican village life with a community of Americans and Canadians on the shore of Lake Chapala. The lake itself was a bit of a dissappointment. It was in a lovely setting, with mountains on the other side, but from the shoreline to a point a half mile or more out in the lake it was covered thickly with water hyacinth.

I'm sure that someone someday will find a use for water hyacinth (has a limited use as cattle feed), or a way to control it, but as far as I know, no one has. As it was, all boats could do was plow through it, and small outboard motor boats could barely move in it at all. Sometimes the wind shifted and blew from the land, and the water hyacinth was blown out into the middle of Lake Chapala, but the periods of clear water didn't last long.

We rented horses and rode through Ajijic and along the lake shore, and through a park. As usual, my horse was a bit of a head case, and I never was confident that he would stay on good behavior. He did, but he kept me worried.

Alice got a smile or wave from everyone we met by unfailingly greeting them with a cheery "buenos dias."

We spent a day with a real estate agent looking at houses in Ajijic and were impressed by what we saw. The houses were relatively inexpensive, and were large and comfortable. From what we saw in the furnished homes, life would be as comfortable as in California, with the very welcome added benefit of an affordable cook and house keeper.

We made reservations for New Years Eve at a very nice restaurant at an Ajijic hotel, and dressed up very formally for the occassion. After the Maitre'De met us at the door and seated us, our waiter appeared and Alice wished him a cheery "Feliz Ano Nuevo." He almost hurt himself trying to hold back laughter, but he couldn't hold it, so he burst out laughing.

What she should have said in greeting was "Feliz Año Nuevo," but if she had we wouldn't have shared such a great laugh.

On New Years Day the two Steves kept trays of delicious hors 'devoures available for their friends and guests all day as we participated in the All-American tradition of Bowl Game watching. Los Artistas had a large satellite dish for television reception, so we started with the Rose Parade, and then I think we glanced at the easily forgetable Cotton Bowl, with Colorado stomping Oregon 38-6.

The highlight for me, and seemingly for most of the guests, was the Rose Bowl, USC against Northwestern. It was a very exciting game, and when Northwestern went ahead 32-31 in the fourth quarter, it was obvious that Northwestern was the favorite of most of us watching. In fact, as a Californian, I may have been the only USC rooter there. However, their joy was short lived as USC scored the next ten points and won 41-32.

Alice had no interest in the bowl games, as usual, but she was having a great time in the company of several other "football widows," which included a lesbian couple she particularly enjoyed chatting with.

We returned to our home on our five-acre ranch in Livermore, and developments at work for both of us soon had our full attention. Later in 1996 I was laid off at Power Spectra and scrambled to find work as a temporary employee, including several months at Nummi in Fremont before getting on as an Internal Auditor at Kaiser Permanente in Oakland.

Alice's company, Vulcan Incorporated, continued to struggle against its fierce competitor until early in 1997. Happily for Alice, the competitor went bankrupt and she was able to sign their top salesman to a sweat equity deal that has since made Vulcan very successful.

We had forgotten totally about retiring in Mexico, and when we finally retired in 1998, Alice's first grandchild was almost a year old and we chose to retire in Gualala to stay close to family and friends.

Now many years later, Mexico is a fond memory as we start each new year wishing each other a "Happy New Anus!"

Please click on the label below to see all my articles on this topic.
Posted by Major Combs at 4:50 PM No comments: