Al Gore has made great use of a coincidence that the end of the Little Ice Ages, approximately 1850, and the natural increase in global temperatures coincided with the early stages of the Industrial Age and increased atmospheric CO2.

However, simply researching climate changes during the past 20,000 years shows that our current warming is modest, includes periods of cooling as CO2 increased, and correlates closely with solar fluctuations, not with CO2. Al's famous "hockey stick" has been totally discredited as it omitted the Little Ice Ages and the Medieval Warming Period. Even Al's guru James Hansen let him down, as NASA revised its temperature record for the past 100 years to reflect that six of the ten warmest years were over 50 years ago.

Al Gore has already made millions, and stands to make millions more, if Congress passes "cap and trade" legislation (learn about it here). The only approach to climate change that makes sense is adaptation, not expensive and vain efforts to reverse natural (and overwhelming) climate forces. Although the Earth is usually much warmer and polar ice free, at this moment in vast geological time we are in a rare ice age, and it looks like we will be plunging back into a period of true catastrophe, global cooling, before we in millions of years return to a "normal" Earth ten to twenty five degrees Fahrenheit warmer than present.

We should never confuse "coincidence" with "cause and effect."
Posted by Major Combs at 5:42 PM No comments:

What is the sound of an ant breaking wind in a hurricane?

I think the California Air Resouces Board just duplicated it.

The Air Resources Board adopts a landmark regulation expected to slash gasoline consumption by 25% and encourage development of low-carbon fuel sources for cars and trucks.

Ethanol is a proven disaster, causing food prices to increase while releasing copious quantities of greenhouse gases (which I care not about), guzzling scarce water resources, and costing more in energy to produce than it delivers in usable energy.

Other biofuels are just as bad or worse, demanding water, land clearing, fertilizers, and burning lots of coal to produce electricity to make biofuels.

Hydrogen as a fuel is even worse, requiring even more electricity while delivering very little in useful product. Hydrogen at its best will be a totally impractical fuel for transporation.

My state, California, as usual leads the way in idiotic approaches to solving the problems of the future.

And as usual, most of the other states will follow California in a stampede of idiocy.

Idiots, like birds, flock together.
Posted by Major Combs at 11:24 PM No comments:

Pelosi and Democrats: "Ignorance is bliss"

Nancy Pelosi said she and the Democrats didn't know about waterboarding. However, House Minority Leader John Boehner (R-Ohio) reported that he saw a list of Republicans and Democrats that were briefed on waterboarding.

Pelosi's excuse? She says that members who receive classified briefings are powerless to act on them...so they skip them!

Now we know why they don't seem to know anything.

It's not just because they're dumb.

They're ignorant by choice.
Posted by Major Combs at 3:44 PM No comments:

Berkeley Kicks Out Its Poor

Berkeley has come up with a plan (Hot debate ahead on Berkeley's energy plans, Carolyn Jones, Chronicle Staff Writer, Saturday, April 18, 2009) to rid itself of poor homeowners and earn the applause of Liberals for “fighting global warming.” When Berkeley mandates that all homes meet strict energy standards, at a cost per home of $33,800 or more, poor homeowners will be forced to sell out and move away. Wealthy buyers will benefit from the forced sales, and the poor sellers’ homes will have lost value equal to the cost of compliance with the new standards. The poor will be forced to sell their homes at lower values, in effect paying the costs to meet the new standards for the wealthy buyers.

What a deal! Berkeley upgrades the economic status of its residents, increases its property tax base, and becomes the darling of global warming activists. Berkeley’s greenhouse gas reductions will be less than the increase from a new Chinese coal-fired plant in its first week of operation, but as with all liberals, it’s the gesture that counts.

UPDATE: Just after I posted this, I found a new Chronicle report that Berkeley was having second thoughts about the wording of their 145-page Climate Action Plan (Berkeley councilors: Home upgrades not required). Apparently Berkeley now is saying that the word "require" in its plan should be replaced with "set a goal." That's a welcome and unexpected sign of sanity on the part of some Berkeley politicians, but it leads me to wonder what that does to "The Plan." The obvious answer is that it pretty well voids it, since the things that Berkeley says are essential to meet its goal to reduce greenhouse gas emmissions by 80 percent won't be happening.

But the poor of Berkeley are not out of the woods yet. There still may be compliance costs - the sum of $10,000 was mentioned - required when the "home is sold or remodeled."

But most at City Hall agreed that Berkeley will continue to aggressively crusade for environmental improvements.

"We're not backing off this," Marks said. "We're very certain we're going to have to get there."

I'm very certain that Berkeley is not going "to get there" by backing off their "Plan," but then again I'm absolutely certain that Berkeley wasn't going to accomplish anything anyway, no matter if they shut Berkeley down completely. Certainly there must be at least one person in Berkeley who will tell the rest that Berkeley is an unmeasurable blip in greenhouse gas emmissions. Even if Kyoto had been totally implemented successfully, the reduction in global temperatures would have been an unmeasurable 0.07 degree Centigrade. Somehow the Senate was bright enough to recognize that and voted 95-0 to not ratify Kyoto, even with Bill Clinton and Al Gore as President and Vice-President.

However, I'm sure that Berkeley will declare its "Climate Action Plan" a complete success, because to liberals, it's the gesture that counts.
Posted by Major Combs at 11:50 PM No comments:

Anthropogenic global warming alarmists are strident and misuse “undeniable,” “unprecedented,” and “catastrophic.” However, man-caused global warming is easily deniable, there are hundreds of natural precedents to our current warming, and previous cold periods, not warm ones, have been catastrophic for mankind. During the past 300 million years, about 90 percent of the time the Earth was much warmer than today. Even in the comparatively cooler Jurassic Period (199.6 to 145.5 million years ago) there was no polar ice. Glaciers on Antarctica didn’t form until almost 35 million years ago.

Naturally, warmer Earth had much higher sea levels; today’s are near the lowest ever, 400 to 1,000 feet below “normal.” If we had “normal” sea levels now, Gualala Ridge would be atop an island or submerged.

For more than half of the past 299 million years the Earth has averaged over 20º F warmer, and our present cool climate is the exception. In fact, the Holocene Climate Optimum, only 9,000 to 5,000 years ago, averaged over 4º F warmer than today. The Medieval Warm Period, 900 to 1350 AD, was also significantly warmer. Tree and snow lines were 1,000 feet higher, crops flourished, and civilizations advanced rapidly. Then the Little Ice Ages, 1350 to 1850 AD, featured severe storms, droughts, crop failures, plague, and the collapse of civilizations. Global cooling, not warming, would cause a “collapse of our lives.”

Fortunately for humanity, the Earth will normally be much warmer. Unfortunately, in the short term we’re going to plunge back into an Ice Age. Since six of the ten hottest years were over fifty years ago, the warmest year was 1934, and we have and are experiencing cooling as CO2 rises, it doesn’t look like we’ll be able to escape global cooling by pumping up greenhouse gases.

Hang on to your warm coat!
Posted by Major Combs at 10:27 PM No comments: 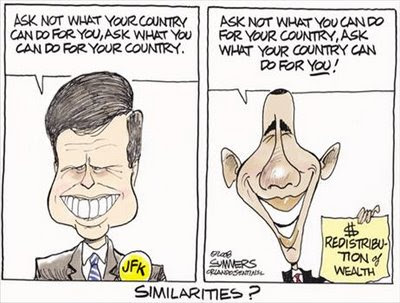 Today Alice and I celebrate our minority status: we're part of the shrinking minority that actually pays income taxes. The majority that pays no income taxes is growing rapidly, and they vote Democrat.

The American Republic will endure until the day Congress discovers that it can bribe the public with the public's money. Alexis de Tocqueville

Rather, the American Republic will endure until Congress creates a majority that pays no taxes, and rewards them by redistributing the wealth of the tax-paying minority to the majority.

This is analogous to two wolves and a lamb voting on what they're having for dinner.

I would have been joining a Tea Party protest today except we were traveling the past week. We just returned home in time for me to stay up very late last night and to work many hours today so I could submit an extension request for filing our income taxes. So far it looks like we're at a break-even point - what we already paid is about what we owe.

Still, I have a lot more work ahead before I can submit our final tax return.

As I typed and griped, and sorted and analyzed our many tax records and documents, I noticed that my attitudes about big government waste and intrusion, plus my status as a military veteran - a retired one at that - put me on Homeland Security Secretary Janet Napolitano's "rightwing extremist" list.

Ms. Napolitano, I can give you names of hundreds of others who proudly served our nation and are critical of wasteful and oppressive big government. We haven't been in hiding. We were very open in our military service, and we've been up front in exercising our constitutional right to freedom of speech.

Ms. Napolitano, I'll bet that you were very critical of investigations for Muslim extremism after 9/11 - you probably called it a "witch hunt" or "McCarthyism" - but you think it's OK to smear veterans and big-government critics.

Ms. Napolitano, I know you won't investigate left-wing extremists with the same zeal as right wingers like me.

Rest assured, Ms. Napolitano, I'll make it easy for you to find me.
Posted by Major Combs at 8:11 PM No comments: