Some posts write themselves.

According to an Associated Press news story, "Securities and Exchange Commission ... senior agency staffers spent hours surfing pornographic websites on government-issued computers while they were supposed to be policing the nation's financial system."

Phrased another way, Who watches the watchers?

Since a very high percentage of government workers are Democrats, what are the odds that these government workers, seventeen of whom were "at a senior level" earning salaries up to $222,418 per year, were predominantly Democrats?

The "senior attorney" among them undoubtedly was.

Clearly these Securities and Exchange officials "'were preoccupied with other distractions' when they should have been overseeing the growing problems in the financial system."

But have no worries.

The Democrats are minding the store, and have been since the mid-term election of 2008.

Barney Frank, the Congressional Black Caucus, and Franklin Delano Raines were on top of everything.

If you doubt me, check out what the SEC staffers were watching.
Posted by Major Combs at 3:10 PM 2 comments: 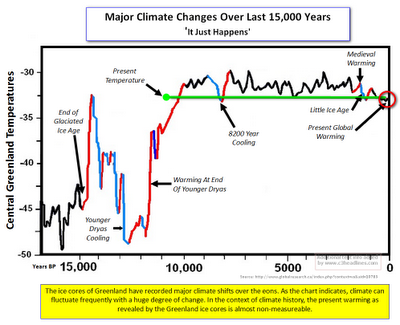 Like the dollar, "unprecedented" just doesn't go as far as it used to.

Believers in anthropogenic global warming argue that current warming is unprecedented. The gist of my counter-argument is that numerous studies show warming was greater during the Medieval Warm Period (800 to 1300AD), and that it was even warmer during the Holocene Climate Optimum 9,000 to 5,000 years ago. These studies will show that warming during those periods was global and persistent, was reflected in ice cores, lake and ocean sediments, in the distribution of plants by latitude and elevations, and evidence from human settlements and historical records. 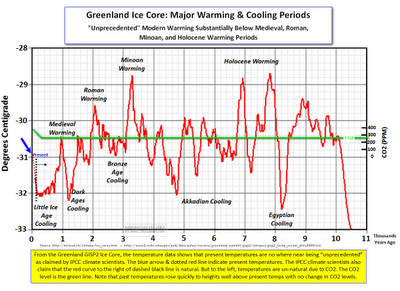 Arrayed against this record of natural climate changes going back over 11,000 years to the end of the Ice Age, the alleged evidence of man-caused global warming spans 60 years when global temperatures both rose and fell while atmospheric carbon dioxide increased. Now the “Climategate” e-mails show that alarmist scientists had to “hide the decline,” admit that the Medieval Warm Period was as warm or warmer, and that it is a “travesty” that their computer models can’t explain recent cooling.
Posted by Major Combs at 4:13 PM No comments:

On Earth Day the “Windies” gusted, and John Muir spun. The marriage of convenience between environmentalists – the Sierra Club, The Nature Conservancy, the American Bird Conservancy, Greenpeace, and the Audubon Society – and industrial wind power projects offends the principles of both science and conservation.

Wind power is retrograde, a technological dinosaur. It only generates within a narrow range of wind speeds, is intermittent, produces best when needed least (nighttime), doesn’t play well with others (see “intermittent”), destroys scenic vistas, remorselessly kills birds (endangered or otherwise), and is and will continue to be prohibitively expensive. Although wind power has a very low capacity factor (25%) compared to nuclear (over 90%), coal (around 80%), natural gas (used primarily for load following, 60%), or hydro (50%), it is much better than solar (under 20%).

For example, between Maryland and West Virginia there is potential for around 2000 wind turbines, each nearly 500-feet tall; they would be placed atop 400 miles of the Allegheny Mountain ridges. About 20 acres of forest must be clear cut to support each turbine—4-6 acres to allow free flow of wind per turbine; one or more large staging areas for each wind project; access road construction; and a variety of substations and transmission lines. Cumulatively, about 40,000 acres of CO² sequestering woodlands containing rare habitat and many vulnerable wildlife species would be destroyed.

Local environmentalists used the California Coastal Commission to annihilate my home-town Gualala’s modest fireworks display by demonstrating that a few nesting pairs of seabirds were disturbed. I doubt any of these environmentalists have voiced objections to the thousands of eagles and raptors killed, not just disturbed, by the Altamont Pass wind farm, or the thousands of migratory birds and sea birds killed annually worldwide. On the contrary, most “environmentalists” turn a blind eye to such carnage.
Posted by Major Combs at 7:10 PM 3 comments:

Congress F's Up Their Own Health Care

The New York Times reports that Congress screwed itself out of its own health care program by mistake.

This is poetic justice - the comment was made over and over that Congress didn't know what was in the Health Care Bill, but still Democrats rushed to pass it to save their political asses. They knew if they took their time that their constituents would be all over them on their Spring break.

"Pass anything, then hope something will work out before November elections."

Well "anything" was passed, and it's hard to criticize because no one understands it - particularly the Democrats.

When the New York Times gives Democrats a hard time, you know they really messed up.
Posted by Major Combs at 11:06 PM No comments:

Email ThisBlogThis!Share to TwitterShare to FacebookShare to Pinterest
Labels: Healthcare

The following is an excerpt from the above Washington Post article:

But scientists say that, during this time, they have only become more certain that their models work.

If the models are as flawed as critics say, Gavin Schmidt, a climate scientist at NASA's Goddard Institute for Space Studies said, "You have to ask yourself, 'How come they work?' "

“The Iowa Method, that’s why they work,” would have answered my late friend, Senior Master Sergeant Robert Kenneth Clough, US Air Force. According to Sgt. Clough, the Iowa Method is a brilliant model of simplicity and accuracy: you start with the desired conclusion, and then figure how you got there.

In short, the Iowa Method is infallible.

The same is true for a volcanic eruption in 1991. It may seemingly explain the subsequent cooling, but what explains the past decade of cooling without volcanic eruptions? Kevin Trenberth in a Climategate e-mail says it’s a "travesty" that our climate science (based on computer models) doesn’t explain the current lack of warming.

A major segment of climate models is based on paleoclimate reconstructions by Michael Mann, Keith Briffa, Phillip Jones, et al. In essence their studies, heavily weighted to analyses of tree rings, show very little variation in global temperatures for the past thousand years, then a rapid warming in the last half century corresponding to increased atmospheric carbon dioxide.

Inconveniently, their tree-ring reconstructions show cooling after 1960 instead of warming, so researchers conveniently discarded that portion of their research and replaced it by grafting on instrumental records to “hide the decline.”

Doing this obviated the need to explain why the tree-ring proxies for temperatures were good until 1960, then not good thereafter.

While ethically problematical, their approach satisfied the dictates of the Iowa Method: show that global warming did not begin until atmospheric carbon dioxide increased.

Non-scientists like Albert Arnold Gore, Jr. grabbed hold of this “correlation” by first stating that current warming was “unprecedented” for the past thousand years, then by doubling this claim to the time of Jesus Christ.

Again inconveniently, Über-climate alarmist Phil Jones recently admitted that the Medieval Warm Period (900 to 1400 AD) may have been warmer than present, and that global climate had cooled recently.

However, Jones ended by proclaiming what can only be regarded as inconsequential, that January 2010 was the warmest on record, the record having begun in 1979. I doubt any reputable scientists would regard one month in a 31-year record as proof of anything, up to and including considering it to be just cause for reordering energy production and the economies of all nations.

Although the Iowa Method would approve.
Posted by Major Combs at 3:12 PM 1 comment: