If Democrat Senator Max Baucus was not drunk while giving this speech, he's in really bad shape.

If he is this rambling and incoherent when sober, maybe he should drink more so he could have an excuse for sounding like a drunken idiot for over five minutes on the Senate floor.
Posted by Major Combs at 10:03 AM No comments:

It seems just yesterday that Al Gore directed our attention to Greenland, for which we should all be grateful. Greenland artifacts of Viking habitation demonstrate that the Medieval Warm Period was, indeed, warmer than the present.

However, Al Gore and his Acolytes are nothing if not history challenged. To them "unprecedented" warming means the end of the inconvenient cooling in 1975. For awhile they tried to say that present warming was the most in the past 1,000 years, but then Mann's "hockey stick" was shattered and they had to concede the Medieval Warm Period (800 to 1350 AD, well within the past 1,000 years).

Then it was unprecented warming for the past 400 years, which conveniently begins during the Little Ice Age. There sure wasn't much warming then.

Unfortunately for Al, science marches on and recent climate records for Greenland show that it was warmer, and got warmer faster, in the 1930's than our current period. (Click here for the report)
This chart of Greenland climate change for the past 170 years show that the 1930's warming was greater and faster than now. 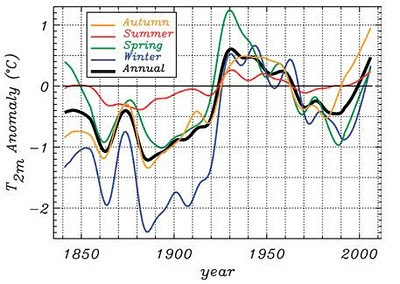 What's a warming alarmist to do?
Posted by Major Combs at 9:43 PM No comments:

There is a book out that for me is a must read: "The Wind Farm Scam" by John Etherington.

Wind power is such a stupid idea it is no wonder it is so popular with the left. It is expensive, unreliable, requires 100% conventional generation backup, kills endangered species birds, visually pollutes scenic vistas, and must be located far away from population centers.

To “solve” this last objection, the most ludicrous plan I’ve seen for wind power was first for New York city, and recently for San Francisco, to install urban wind turbines – with no apparent appreciation to their noise and vibration characteristics, loss of generating capacity because of wind drag from buildings and the necessity to use relatively small wind turbines, and the unsafe conditions caused by mechanical stresses on the buildings upon which they are erected.

In farcical attempts to design ways to overcome the intermittent power generation factor – it is an exceptional wind farm that produces at 25% of rated capacity – there are proposals to use excess energy generated during the night to compress air (or to store energy in some other mechanical way) to generate power when the wind doesn’t. Of course these alternative power schemes will be very expensive and, as yet, have not been created to operate in the real world.

I lived nine years within sight (but thankfully not sound) of the wind farm at the Altamont Pass, California, and observed that most of the time none of the turbines were turning, and when some were, a lot were not because they were down for maintenance. About the only thing they did well was kill eagles and hawks – thousands each year. I would hazard a guess that more energy went into creating the Altamont Pass wind farm than was generated by it, and that its operation never made, and never will, make economic sense.
Posted by Major Combs at 10:45 PM No comments:

I have often mentioned that previous periods were warmer than the present.

Further, that these warmer periods did not cause runaway warming, although from all that the current alarmists say, they should have. If man-caused warming triggers positive feedbacks - increased water vapor traps more heat, more heat increases water vapor and generates more release of CO2 from oceans and methane from thawing permafrost - then previous warming should have done the same.

More proof of that, or the lack of runaway warming, is clearly shown in a recent video.

The video is great, but for quiet contemplation of the graphs showing previous periods of greater natural warming compared to the present, go to "Hockey stick observed in NOAA ice core data."

Click on this graph showing periods of climate change during the past 10,000 years. Of interest are the two periods of greater warming during the past 2,000 years - the Medieval Warm Period of about 1,000 years ago, and the even warmer Roman Period at year "0". So much for Al Gore's claim that the current warming is "unprecedented."

Obviously Al learned from Bill Clinton how to parse the truth. What Al meant to say is the current warming is unprecedented if you only look at the last 1,000 years, and then only if you use the discredited "hockey stick" prepared by Michael Mann of "Climategate" fame that eliminated both the Medieval Warm Period (850 to 1350AD) and the Little Ice Age (1350 to 1850AD).

In other words the current warming is unprecedented if you only go back to the Little Ice Age, or if you hide or overlook all the previous warming periods. For example, the graph shows at least a dozen in the past 10,000 years warmer than the present.

Posted by Major Combs at 6:48 PM No comments:

I have previously doubted the neutrality of FactCheck.Org, and their "fact checking" of Climategate added to my doubts. Rather than demonstrating a "nose" for facts, they mischaracterized the position of man-caused global warming skeptics, and then proceeded to knock their strawman down.

They said: "Climate skeptics are claiming that they show scientific misconduct that amounts to the complete fabrication of man-made global warming."

That's not what the skeptics say. We say that the scientific misconduct raises doubts about the science of man-made global warming. It's unprofessional of FactCheck.Org to charge skeptics with thinking that information about a segment of the science is proof of its complete fabrication. Just as we skeptics believe that the rise in CO2 since 1950, and the fluctuations in cooling and warming in that period, invalidate alarmists claims that CO2 drives global temperatures.

The following is my reply to FactCheck.Org: (with some minor alterations for grammar and to add a dig about Al Gore lying about the emails)

As you possibly don’t know, or are taking pains to not know, the point is that the science underlying the validity of reconstructing global temperatures by means of tree-ring and other proxies has been placed in doubt by the actions of Drs. Jones, Mann, Briffa et al. The tree-rings post 1960 show cooling or no warming when compared to instrumental records. This divergence led Mann, Briffa, and others to drop the tree-ring temperatures and replace them with instrument readings without disclosing their divergence. The point in challenging this is quite simple: if current tree-ring temperatures don’t agree with current instrument temperatures, why is there any confidence that tree rings were good proxies for temperature in the preceding 1000 or 2000 years?

If the Medieval Warm Period was warmer than the present, as evidence of vineyards in England and pastures and farming in Viking Greenland show – and a Harvard/Smithsonian study by Soon et al of 240 climate studies worldwide show it was warmer then than now – then the positive feedback from increased water vapor trapping heat in the troposphere, thereby causing runaway warming, should have happened 1,000 years ago, and the runaway warming forecasted for this century should be part of our historical record.

Of course if its effects were as dangerous as forecasted, we wouldn’t be here to read the record.

Catastrophic warming didn’t happen then, and it didn’t in the very warm Roman Warm Period or in the earlier, even warmer Holocene Climate Optimum. What did happen naturally was that the Ice Age ended, sea levels rose over 400 feet in the past 10,000 years – an average of over four feet a century compared to the eight inches sea levels rose in the past century – and that humankind progressed and prospered during the warm periods and suffered famine, violent storms, and pestilence during the intervening cold periods.

All of these dramatic climate changes happened naturally. In the past two centuries 30-year periods of warming have alternated with 30-year periods of cooling, possibly caused by the Pacific Decadal Oscillation. NASA records show that the United States had warming from 1915 to 1945 equal to or greater than the recent warming, and that the cooling 1945 to 1975 spurred predictions of catastrophic global cooling even as atmospheric carbon dioxide increased steadily and rapidly.

Glaciers were in retreat during the 1800’s, long before the rapid industrialization beginning around 1950 started the rapid rise of CO2. Mount Kilimanjaro, contrary to Al Gore’s posturing, lost most of its ice cap prior to 1953 from sublimation - which turns ice directly into water vapor at below-freezing temperatures - not warming, since at the elevation of Kilimanjaro’s ice cap the temperature hardly ever of never rises above freezing.

One climate alarmist is on record in the Climategate emails stating that it is a “travesty” that the lack of warming during the past decade can’t be explained. Al Gore denigrates the emails, saying that they are all over ten years old, even though many are recent.

It’s a travesty that your fact checking missed the critical points the exposed emails uncovered. I would have expected better from an unbiased pursuit of the truth.
Posted by Major Combs at 6:29 PM No comments:

For awhile I thought Tiger was a Democrat plant to take attention away from "Climategate," but now I realize that the main stream media needs no distraction to ignore Climategate. They only cover the news that suits their agenda.

Tiger's next will be number twelve.

I wonder if he will find they are "Cheaper by the Dozen?"
Posted by Major Combs at 5:30 PM No comments: