Commerce Clause abuse is a Liberal mainstay. Article I, Section 8, Clause 3, simply states: “[The Congress shall have power] To regulate Commerce with foreign Nations, and among the several States, and with the Indian tribes.” Thus, the original purpose of the Commerce Clause was primarily to eliminate trade barriers among the states.


Nowhere in the Commerce Clause does it provide the power to regulate commerce within a state. This is in keeping with the Tenth Amendment: “The powers not delegated to the United States by the Constitution, nor prohibited by it to the States, are reserved to the States respectively, or to the people.”

In a 1942 Supreme Court ruling against Filburn, a small farmer was fined for growing 12 acres of wheat above his government allotment on his own land for his own use.

More recently and closer to home, the Court decided that the Commerce Clause permits Congress to prohibit the medicinal use of cannabis (Gonzales vs Raich), even though two California women following doctors’ recommendations only grew six cannabis plants on their own property for their own use .

However, as our new local marijuana dispensary illustrates, enforcement of the federal Controlled Substances Act is arbitrary and capricious. For example, Congress has permitted all fifty states to erect the type of barriers that the Commerce Clause was written precisely to tear down, the barring of insurers from selling policies to people in another state.

Which brings us to the mandated healthcare so lavishly praised by Liberals. In the words of Ben Stein, "(It’s hypocritical) that Obama wants every citizen to prove they are insured, but people don't have to prove they are citizens."

It can’t get any more arbitrary and capricious than that.
Posted by Major Combs at 4:43 PM No comments:

Federal authorities arrested 596 illegal immigrants with prior criminal convictions, according to John Morton, head of the Immigration and Customs Enforcement agency (ICE). Most of them will be deported, though 22 may be prosecuted for illegal entry after previous deportation. He said the Obama administration is focused on deporting immigrants who break the law.


The sweep exposed holes in the U.S. immigration enforcement system, since 572 of the criminals, some previously convicted of murder, sex crimes, assault and fraud, had been released from jail or prison without being turned over to immigration authorities as the law requires, Morton acknowledged.

There are as many as a million such criminal illegal immigrants in the U.S., Morton said.

The sweep illustrates the hypocrisy of the Obama administration towards immigration enforcement as it opposes Arizona’s law.

Obama officials say they are focusing their efforts on people convicted of crimes, but acknowledge that they continue to remove noncriminals.

Meanwhile, the administration is also facing criticism from Congress that it is not aggressively enforcing immigration laws. In response, officials say they are removing a record number of immigrants, about 400,000 per year. A majority of those have not been convicted of crimes.

Arizona proposes doing what the federal government does poorly – enforce immigration laws. Under the legal doctrine of "concurrent enforcement," states are allowed to ban what is already prohibited by federal law. As an example, courts have upheld efforts by Arizona, California and other states to enact sanctions against employers who hire illegal immigrants.

Who said? “Tax reduction thus sets off a process that can bring gains for everyone, gains won by marshalling resources that would otherwise stand idle—workers without jobs and farm and factory capacity without markets. Yet many taxpayers seemed prepared to deny the nation the fruits of tax reduction because they question the financial soundness of reducing taxes when the federal budget is already in deficit. Let me make clear why, in today's economy, fiscal prudence and responsibility call for tax reduction even if it temporarily enlarged the federal deficit—why reducing taxes is the best way open to us to increase revenues.”


John F. Kennedy, January 1963. And it worked. Lower tax rates produced higher tax revenues. Interestingly, the greatest increase in tax revenues came from the wealthiest taxpayers. In the past forty-seven years, as a percentage of GDP, the top one percent of taxpayers now pay 3.3 percent, compared to 1.3 percent in 1963. In fact, they are now paying the same in total as the bottom 95 percent, who are only paying at half the rate they were prior to the Reagan tax cuts.

That’s right. Since the Reagan tax cuts, the rich are paying at twice the rate, and the bottom 95 percent are paying at half the rate. So much for the Democrat mantra that Reagan gave tax cuts to the rich on the backs of the poor (and middle class).

That won’t stop Democrats from playing to the same old class envy and demanding more taxes on the rich so they “pay their fair share.” However, as always, if the taxes on the rich go up, total tax revenues (and employment, and investment, and job creation) will go down, and the deficit will go up.

About a matter of profound insignificance, FDR once said, "Did you ever hear an ant break wind in a hurricane."

Since it's easier to show than tell, click on this link (Illustration of the Federal Budget) for a short (one minute 38 seconds) video that puts Obama's proposed budget cut in perspective.
Posted by Major Combs at 12:05 PM No comments:

A Job is a Right? 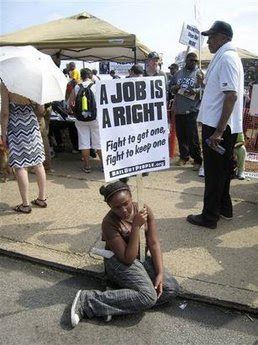 With an attitude like that, it's no wonder she won't get a job!

If having a job is a right, then someone is obligated to provide that job.
Usually, someone is hired based upon skills, education, experience, appearance, intelligence - usually a combination of these, and more. If each person has a right to a job, then the use of such discriminators would not be allowed, except...
There are jobs that are so menial that the qualifications for them don't go much past being upright and breathing. However, since the value of the work done is low, the pay is low. The only ones who will take such jobs are illegal aliens.
Any person who has a right to a job wouldn't be caught dead accepting such employment.

So we have citizens with very low value as employees demanding high-value jobs as their right.
What good is it to have the right to a job if the only jobs you are offered because of your lack of employment skills are the ones you wouldn't accept anyway?
So how do you exercise your right to a job you would accept, if no one will offer you such a job?
It's simple. The government has to hire you. And pay you what you think you're worth.
So the government hires you into a good paying job - one you're not qualified to do.
The stress and frustration of not being able to do the work cause you to have health problems and spend a lot of time on sick leave.
However, the job still needs to be done, so the government hires another employee who can do the work, keeps you on the job too, and lowers your stress level by not requiring you to do anything.

You celebrate your good fortune by producing many children, secure in the knowledge that, no matter their lack of skills and education, they will have guaranteed good paying jobs for life, just like you.
You congratulate yourself for being such a responsible citizen, and adding many more to the workforce just like you.
Life is good!
Posted by Major Combs at 11:47 AM No comments:

Email ThisBlogThis!Share to TwitterShare to FacebookShare to Pinterest
Labels: Economy

Today everyone is a spin doctor. Secretary of the Treasury Timothy F. Geithner does his part for Obama in the New York Times (of course), in his Op-Ed piece "Welcome to the Recovery." For being tone-deaf and clueless, this is a prize winner.

It's a "blame it on Bush" piece, conveniently overlooking that Democrats controlled Congress for two years before the recession bit, and that Barney Frank, the Congressional Black Caucus, Franklin Delano Raines, and the clowns at Fanny Mae and Freddy Mac sowed the seeds and nurtured the crop of mortgage malpractice activities, then attempted to "wash their hands" of any and all responsibility.

Hitting with great backspin, Newt Gingrich has an article with superb charts (click on the links) chronicling the "Indisputable Failure" of Obamanomics. There's the Obama Jobs Gap, the Obama Jobs Deficit, and a comparison with past recessions and recoveries.

Democrats suffer from schizophrenia about government stimulus. They say Bush's was bad, but about half of Democrats think Obama passed TARP instead of Bush, and think that was good.

From one of the least likely sources, an article by Fareed Zakaria in Newsweek, "Obama's CEO Problem," we find that the major problem is not government inaction, but the threat of government action. Zakaria admits that government cannot do what business can to end the recession, and that what is holding business back is uncertainty concerning taxes and regulation.

"The key to a sustainable recovery and robust economic growth," wrote Zakaria, "is to get companies to start investing in America." And why won't they? One CEO told Zakaria about uncertainty about government actions, “Almost every agency we deal with has announced some expansion of its authority, which naturally makes me concerned about what’s in store for us for the future.”

We don't need the government to take our money, then give it back to its chosen winners. That's the path to making us all losers.
Posted by Major Combs at 10:59 AM No comments:

I remember Suffolk, an immobile aircraft carrier
Sending fighters and bombers over German factories
And farms, and cathedrals, and villages
Aircrews never seeing the frightened German faces
Scanning leaden skies for raining death
Or the faces of the prayerful Jews
In abandonment of hope for life
Wishing death equally on captive and captor

I remember when I arrived at Bentwaters
And met Arthur my first day on the job
The Cold War raged, and our 72 Phantom jets
Were in England to fly a deadly mission
A one-way trip to the Fulda Gap
Ending in a high-speed dive
A sudden pull up and release
A nuclear bomb powered by inertia and gravity
Flashing above the Eastern Army tanks and trains
Bringing death before sound announces its arrival

I remember fighting a thermo-nuclear war
Every month for over five years
Strangely war always arrived quietly
Dilly and I would be in the field
Dilly chasing a hare as I approved
Then on the dirt farm road
Our old Ford Anglia bouncing
Marilynn waving, shouting “Alert”
I changed to my uniform and raced to the Command Post

I remember plotting nuclear detonations
Of differing megatonage and how the winds
Distributed the nuclear fallout pattern downwind
Soon the first nukes would fall
London would be gone
The millions of people and the thousands of years
Living and building gone in a flash
Next Manchester, deadly for us
Prevailing winds would soon bring fallout
And we rushed to launch our flights of death
Before its silent and invisible shroud
Covered us

I remember, I remember
Another exercise is over
Released into the cold English night
From the bustling Command Post
The quiet, the silence, the peace

I remember telling Arthur
“Mate, I can’t imagine war,
What was it like?”
“Mike, I don’t know
My war was over before I knew it”

Posted by Major Combs at 4:03 PM No comments: