On Memorial Day I’m writing this to protest the shabby treatment of fellow veterans and to challenge Liberal support for a single-payer health system.

“The Veterans Health Administration (VHA) is America’s largest integrated health care system with over 1,700 sites of care, serving 8.76 million Veterans each year.” It is a single-payer system and has often been held up as a model by Obamacare supporters. Paul Krugman, Vouchers for Veterans, The New York Times, November 13, 2011, put down Mitt Romney’s veterans health privatization plan by touting the VHA as a socialized medicine success story.

Two years earlier, another Times columnist, Nicholas Kristof, wrote: “(The VHA) is fully government run, much more ‘socialized medicine’ than is Canadian health care with its private doctors and hospitals. And the system for veterans is by all accounts one of the best-performing and most cost-effective elements in the American medical establishment.”

The Washington Post’s Ezra Klein wrote in 2009 that one of his favorite ideas was expanding VHA to non-veterans, and that the VHA was America’s best-functioning health system.

Nancy Pelosi was quick to blame the emerging VHA scandal on President Bush, speaking as if Democrats had no VHA responsibilities since Bush left office in 2009.

However, in 2004 the left-leaning Rand Corporation found that: “(T)he VA system delivered higher-quality care than the national sample of private hospitals on all measures except acute care ... In nearly every other respect, VA patients received consistently better care across the board, including screening, diagnosis, treatment, and access to follow-up.”

The Rand Corporation reported that quality improved significantly 2007 to 2009, again during Bush’s presidency.

The VHA, like Obamacare, is another shining example of government incompetently competing with the private sector, and should be privatized. Our veterans deserve better treatment than politicians.
Posted by Major Combs at 8:05 PM 3 comments:

After our return from Antarctica, a letter writer was embarrassed that I dared argue with the “experts.” Following her lead, I will feign embarrassment for the experts on our trip, James Balog and Dr. Robert Bindschadler. They, along with many glaciology experts, are alarmed by the “collapse” of the West Antarctic Peninsula ice sheet. The source of my embarrassment is that none of the experts mentioned that this ice sheet has been retreating, often at a much greater rate, since the Ice Age ended over 12,000 years ago. Since then it retreated over 545 miles, including a phenomenal 190 miles in only 800 years (7,600 to 6,800 years before present), according to a 1999 study.
Dr. Bindschadler is an expert researcher of the Antarctic Pine Island glacier. I doubt  ignorance prevented him mentioning that this glacier retreated similarly 8,000 years ago.

James Balog did most of his “Chasing Ice” work on Greenland’s Jakobshavn glacier, a famously fast moving glacier that retreated 21 miles 1851-1964, and only 9 miles since.

Embarrassingly, all of these periods of previous larger glacier retreat were either not in their expert knowledge base, or the facts were inconvenient since atmospheric CO2 levels were then only 72% of current levels. I asked, and received no answer, how was current glacier retreat caused by increased CO2 when previous greater retreat wasn’t?

Charting a course of action “to save the World” based on failed concepts is illogical. Mr. Wiesner and Mr. Landecker, you do agree, don’t you?
Posted by Major Combs at 8:10 PM No comments:

The number 97% should have its own natural climate change deniers’ shrine. As I wrote following our Antarctic cruise, James “Chasing Ice” Balog and Dr. Robert Bindschadler, retired-NASA, both said that 97% of climate scientists agree that climate change due to human activities. They referred to the studies cited in the Ed. Note, page 5, 5/9/14 ICO. I rebutted the first mentioned, M. K. Zimmerman et al, both on the cruise and in the 5/21/14 ICO on my return.

The 2008 Dolan/Zimmerman study asked opinions of 10,257 Earth Scientists at academic and government institutions on two questions, and 3,146 responded. However, only 79 responders were included, meaning 97% were excluded.

Question one (paraphrased): Do you believe global temperature has risen, fallen, or stayed the same since pre-1800 levels? Of course it’s risen since the Little Ice Age ended about 1850AD, so I’m in the 97% too.
Opinions are not science. Clear, falsifiable (testable) conclusions based on real evidence are. The self-serving surveys the ICO Editor cited are anti-science; their fraudulent claim that “the science is settled” is the antithesis of the scientific method.

Far more than 3% of scientists disagree with AGW. Over 31,487 American scientists (including 9,029 PhDs) have signed their disagreement.

Karl Popper would have declared the models failures with such evidence. ()

Lewis and Crok found: “The [climate models] overestimate future warming by 1.7–2 times relative to an estimate based on the best observational evidence.” 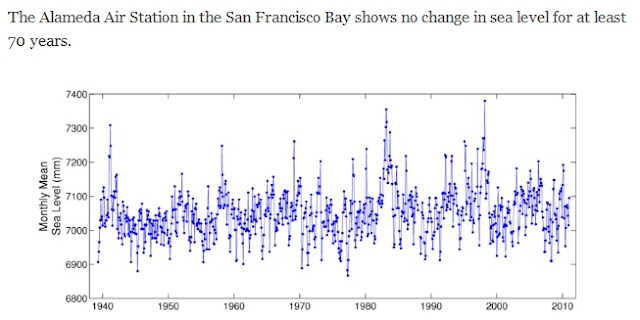 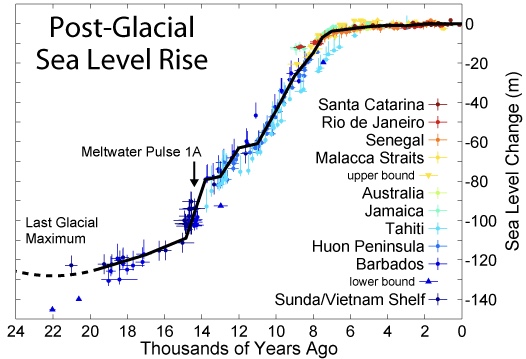 In previous letters, I've illustrated ad nauseam that sea level rose over 400 feet following the Ice Age 12,000 years ago, that sea levels were higher during the four previous warming periods of the past 10,000 years – sea levels during the Holocene Climate Optimum (8,000-4,000 years ago) were up to ten feet higher – and that current sea level rise is a natural rebound from the drop in sea level during the Little Ice Age (1450-1850AD).
Mr. Wiesner said I refuse to fit an RMS trend line. Although I can’t find such a refusal, I wonder why Mr. Wiesner hasn’t done it himself? Anyhow, I’m pleased to comply. For San Francisco, the mean sea level trend is 2.01 millimeters/year with a 95% confidence interval of +/- 0.21 mm/yr. The other five cities’ trends are here. Projected increases per century: a modest 1.5” to 8”.
Warmists refuse to debate previous climate change with me; in fact, they seem to avoid all debate. While on our Antarctic trip, James “Chasing Ice” Balog and Dr. Bindschadler both publicly avoided debating previous climate change. You too, Mr. Wiesner?

For Brendan Mobert: I appreciate your comments (Alice agrees with you), but the “other side” owns global warming news (for instance, ICO), and mine doesn’t, so while I’m “riding the tiger”, I can’t get off even though I’ve beaten it nearly to death.
Posted by Major Combs at 8:23 PM No comments:

John Wiesner again cast cherry-picking allegations in a purportedly scientific letter remarkably devoid of science. He accuses me of avoiding “an obvious upward sea level trend line”, when my previous letter, and many before it, noted that San Francisco sea level has risen 4.2” since 1854. My point has been, and remains, that in the past three decades (since 1983) of unremitting increase of atmospheric CO2, sea levels for six West Coast cities have fallen, not risen.


In previous letters, I've illustrated ad nauseam that sea level rose over 400 feet in the past 12,000 years following the Ice Age, that sea levels were higher than now during the four previous warming periods of the past 10,000 years – sea levels during the Holocene Climate Optimum (8,000-4,000 years ago) were up to ten feet higher – and that current sea level rise is a natural rebound from the drop in sea level that occurred in the Little Ice Age (1450-1850AD). (Click here for more information about previous higher sea levels.)


Using another statistical tool, variation of 50-year mean sea level trends, five cities show a decreasing rate, and one (Victoria) shows no change, for the past half-century. My point, given recent and historical trends, sea level increase this century should be about 8”(or less), just like the past two centuries.

These are the links to the variations of 50-year mean sea level trends:
San Francisco
San Diego
Los Angeles
Seattle
Vancouver
Victoria
Posted by Major Combs at 3:29 PM No comments: