National news services have recently disgorged many articles about Catastrophic Anthropogenic Global Warming (CAGW), and the San Francisco Chronicle has particularly highlighted predictions of sea level rise of five feet by 2100. However, since coastal features look the same now as they did when I came to Point Arena in 1949, I was intrigued to discover what I had missed observing the past 63 years. “The truth must be in the data the eminent scientists have developed,” I commented to myself, and decided to seek their truth.

It was surprisingly easy. I went to the government’s website for the Commerce Department/National Oceanic and Atmospheric Administration/National Ocean Service, tidesandcurrents.noaa.gov, clicked on “mean sea level trends for stations in California,” and put the information for the 16 stations on a spreadsheet. Two significant facts were immediately obvious: sea level on the California coast increased at a rate of about seven inches per century, and there has been little or no increase since 1980. Instead of an accelerating rate of increase, there has been deceleration and in some instances, sea level decline, in recent years.

These simple facts, easily determined from government records by any citizen with curiosity and Internet access, are totally at odds with the alarmist press releases. Any “science” reporter could find what I found during a 30-minute coffee break. It took another 30 minutes to scan the records for the 21 other US coastal states, plus 14 Atlantic and Pacific islands.

Conclusions? Sea level rose as much or more in the first half of the 20th Century, and subsidence caused by isostatic rebound from the Ice Age affects some Atlantic coast records.

The information readily available is mind boggling, and it boggles my mind that “science” journalists don’t use it. They must fear what they might find.

Posted by Major Combs at 9:35 PM No comments:

The California Fool's Rush of 2012 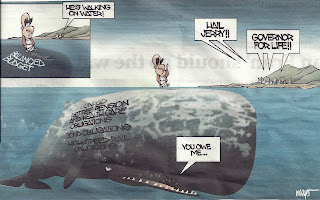 
“California spends most of its money on salaries, retirement payments, health care benefits for government workers, and other compensation,” said Schwarzenegger, after he replaced Grey Davis as governor. “State revenues are up more than 50 percent over the past 10 years, but still we’ve had to cut spending on services because so much of that revenue increase went to increases in compensation and benefits.”

Still California spends it like it has it, but California is broke. However, that doesn’t stop the super-majority Democrats from looking at Proposition 30 passing as a license to unleash new spending, not to reduce unfunded liabilities.

California has 13% of the nation’s population, but 25% of the unfunded liabilities, thanks to government mismanagement, incompetence and corruption. “A new estimate from Moody’s Investor Services triples national public pension debt from $766 million to $2.2 trillion (and is based on using) an annual earnings forecast based on corporate bonds, 5.5 percent, much lower than the 7.5 to 8.25 percent forecast by pension funds.” And 5.5% is overly generous, since current return on equity is actually under 4%. By denying the truth, government adds to the unfunded liability, which will cause communities to go bankrupt to pay pensions. Already we have Vallejo, Stockton, and San Bernardino, and Detroit is following the California model.

It’s no surprise that two of the strongest public employee union states have the worst unfunded financial problems. Cities are first to feel the pain, because their revenue base is stagnant and almost all their expenses are for personnel. Counties are not far behind for the same reasons, and soon states will follow. The Liberals’ plans to solve the problems by soaking the rich and corporations are bandages on severed arteries, especially since government looks on more taxes as the signal to spend more.

Posted by Major Combs at 9:39 PM No comments:

We are limping into the Holiday Season this year. Alice had her right knee replaced, and plans the same on her left next year. When all the staples were in the incision it looked like she had a zipper. Before the operation Alice walked at least three miles a day over hill and across sandy beach, but she wanted her knees fixed so she can “hike Machu Picchu” in about three years. This coming summer we’re cruising up the Mississippi on the American Queen steamboat from New Orleans to St. Louis, and early in 2014 we’ll be entertaining the penguins in Antarctica. This past spring we were in Panama and Costa Rica for just over three weeks of hiking, swimming, and nature watching with an affiliate of National Geographic, Lindblad Expeditions.

Buddy is 15 ½ and limps and falls a lot. We know he’s on borrowed time, but each new day is very special because we can’t take it for granted. Hearing and eyesight are good; he still can walk three miles a day and climb up our steep stairs to try to sneak into our bedroom each night. He demonstrates his sense of humor is intact when he threatens to eat us if we stop petting him. “One day at a time.”

I was sought out and appointed to fill a vacancy on our ambulance board, and recently ran for re-election. Four positions were open, with five candidates, and I came in Number 5. Not surprising, since as an open conservative I have about the highest political negatives in this very liberal area. Alice voted for me, but she’s happy I lost because now it’s a lot easier to plan our trips and activities. Still, it was a good learning experience and I’m glad I did it. The people I worked with were great.

Alice, per a 15-year-old contract, is no longer President, CEO, and majority stockholder of the company she founded in 1978, Vulcan Incorporated. Fortunately, she is delighted with the leadership of the new head of Vulcan. His great competence is allowing her to spend less time as a Vulcan consultant and board member, and more time writing her autobiography of a woman breaking into a formerly male-dominated industry.

Meanwhile, I’m spending a lot of my time researching natural climate change and Al Gore’s ignorance of it, and this has evolved into a book project.

I now have almost as many great-grandchildren (3) as grandchildren (5). My oldest grandson, Michael Bruce, has a daughter, Corrina, just over a year old. Alice also has five grandchildren, and is in no hurry to be a great-grandmother since her oldest is only 15.

A November 24, 2012 Atlantic Magazine article, ’5 Charts About Climate Change That Should Have You Very, Very Worried’, has me very worried. It’s scary to think such natural climate change ignorance can pass even an uninformed editorial review.

One chart showed the top layer of Greenland’s ice melting and refreezing in a four-day period, as it’s done many times over thousands of years. I wonder how Atlantic missed one of my favorite charts showing Greenland warmer than present for over 90% of the past 10,000 years? Ancient Greenland farms are just now reappearing from under ice cover that flourished 1,000 years ago.

Then “Coral Reefs are doomed”, which omitted consideration of the Mesozoic Era when atmospheric CO2 was up to four times higher and coral reefs were more widespread and thriving. This is logical, since coral likes long, warm periods (our present warmth and high sea level only began 10,000 years ago at the end of the Ice Age), and recent tests have shown Great Barrier Reef coral likes a CO2-enriched diet.

An Atlantic map of America supposedly showed wildfires are multiplying, yet American and Canadian historical records show this is false.

Finally, Atlantic thinks Civil Wars are Rising, but a chart of death toll from warfare going back over 2,000 years shows that war deaths as a percent of human population have fallen from highs of 10% or more hundreds of years ago, to just a small fraction of a percent, and the number of recent conflicts has fallen 40% since the early 1990’s.

Parading ignorance in an educational forum is stupid!
Posted by Major Combs at 10:02 PM No comments: