Over eight years ago I was interviewed on one of our local radio, and this is the link to the interview.
Posted by Major Combs at 2:54 PM No comments:

Some Christmas letters you dread writing, but know one day you must. This is that one. 2013 was a cruel year for losses of loved ones. Alice’s father George was in great shape at 98½, but had a fatal fall rushing to play bridge. Several months later his older sister, Ruth, died on her 101stbirthday. In between we lost our beloved Buddy Doggy just before his 16thbirthday. In each of these losses we are comforted by the thought that each had long, active lives, and we were blessed to have them for so long in our lives.  Too many friends also passed away, leaving us cherished memories of times we shared. 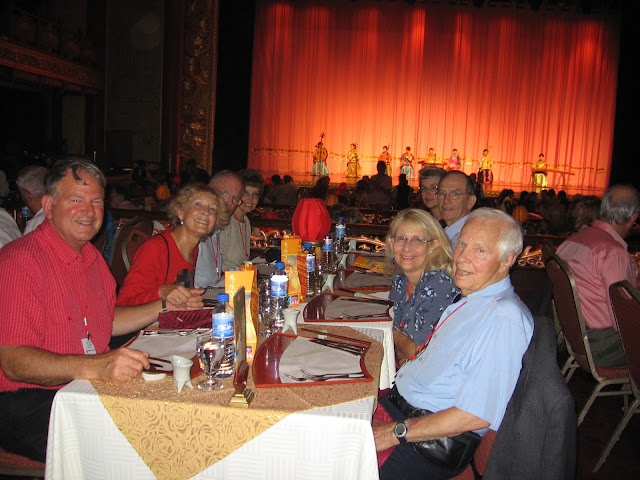 Alice and I with George and Susan Dickenson in China 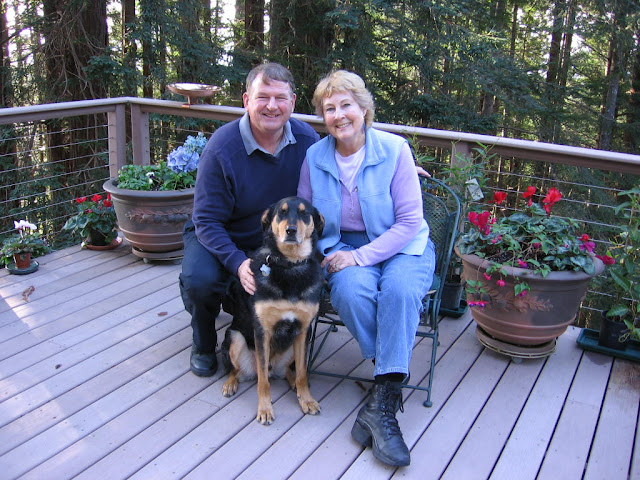 With Buddy, such a sweet doggy

The past year we fed our travel bug lightly, and planned only one special trip, cruising up the Mississippi on the biggest steamboat ever, the American Queen. We arrived in New Orleans June 14 and spent nine days (mostly walking) experiencing this renowned city. On June 23 we boarded the American Queen and began one of our most relaxing and interesting trips ever. I sneakily booked the cruise before its official opening date to get us the premier cabin, the Mark Twain Suite. I loved its commodious 500 square feet, and Alice luxuriated in quiet privacy and a full-size bathtub. Each day featured memorable stops in places we knew only from history classes, books, and movies. Our cruise ended at St. Louis on the Fourth of July. The meals and entertainment on the American Queen were outstanding. Among many highlights, their Mark Twain impersonator may have improved on the original.  We spent a week bicycling St. Louis, and returned home relaxed and refreshed. 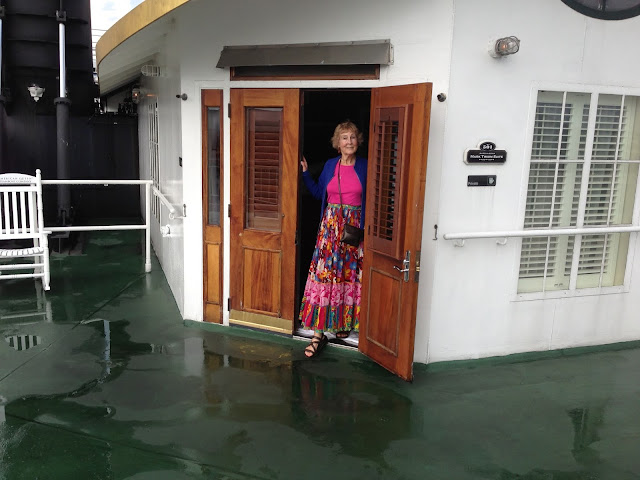 The Mark Twain Suite had a huge private deck

Not long after our return I accompanied Alice to a writers’ conference in Fort Bragg. Alice has been totally absorbed in writing her memoir, The Lady with Balls, a title given to her by the Italian garbage men who used to run San Francisco Bay Area garbage collection and recycling. It’s a delightful story I can’t do justice to in this letter (unless I make this a Christmas book), but we’ll let you know when it’s published. I’m researching and writing about how global warming is natural, not human caused, but Alice’s book is a lot closer to publication than mine. While Alice attended classes, I visited the animal shelter and found Radar, reputed to be a McNab, a Border Collie mix developed just south of Ukiah in the late 1800’s. Radar will be two on February 22, and loves to catch tennis balls every day on Cook’s Beach. Sometimes he even brings them back.

In February and March we’ll be in Argentina, Antarctica, South Georgia Island, and the Falklands. We start with a week in Buenos Aires, followed by a 21-day cruise on the 148-guest National Geographic Explorer. This will be another “trip of a lifetime,” but totally different than our first trip of a lifetime, the four months we biked in Germany, England, Ireland, Isle of Man, and Wales in 1998. After all of our travels, we still have most of the World left to see.

Next August we will celebrate our 25thAnniversary with a romantic one-week stay in San Francisco, but after Antarctica and before then, we hope to have visits with friends and family.
Alice, Michael, and Radar