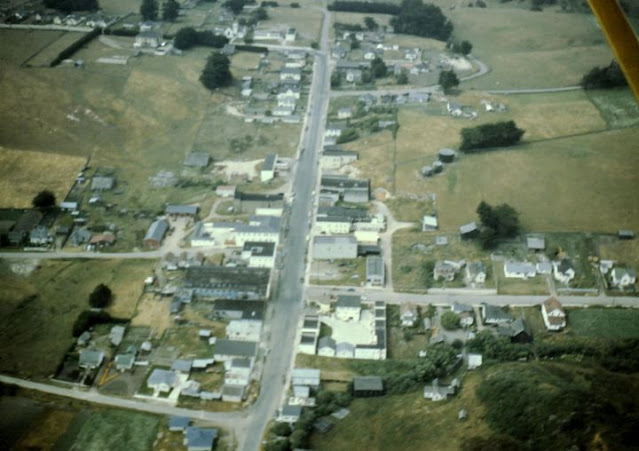 Facebook is often maligned, and I suppose rightfully so, but I'm grateful for Facebook more often than not. In the case of this photo, it's special to me in a way that it would be for few. It was taken by a family friend, Jimmy Morrison, from his light airplane flying over the south end of Point Arena sometime in late 1949 but more probably in 1950. So far I'm the one providing the estimate of when it was taken based on my knowledge as a seven-year old at that time with familiarity with certain Point Arena landmarks.
But let me devote some words to Jimmy Morrison. When we arrived in Point Arena September 10, 1949, Jimmy was an auto mechanic at the Union 76 station, owned and operated by Jack Pelascio and his son Jim. At the time the Pelascios owned quite a lot of Point Arena, besides the Union 76 station the Point Arena Theater on adjacent property, and the old high school building and its land.
The picture was posted on Facebook by Jimmy's stepson, David Weymouth, who added:

I couldn’t have had a better stepfather. His parents were so poor in New York City that they had to give him to a farm family in upstate NY to work for them when he was in the fourth grade. That was the extent of his schooling. But he always read a lot and saw a bit of the the world in and after the war in the military and Coast Guard. He never went far financially but was a fine person and wonderful for my mother.

At the photo upper left, just above the open fields, stands the former Point Arena High School building. When we arrived from Southern California, we parked our trailer on the left (east) side of the building on a concrete slab which may have been a combined tennis and outdoor basketball court. I feel certain that the silvery object by the building is our trailer, which in 1951 we moved to the front of the building after we had moved into one large room at the left front of it.

I wrote about our life in the Old High School here.