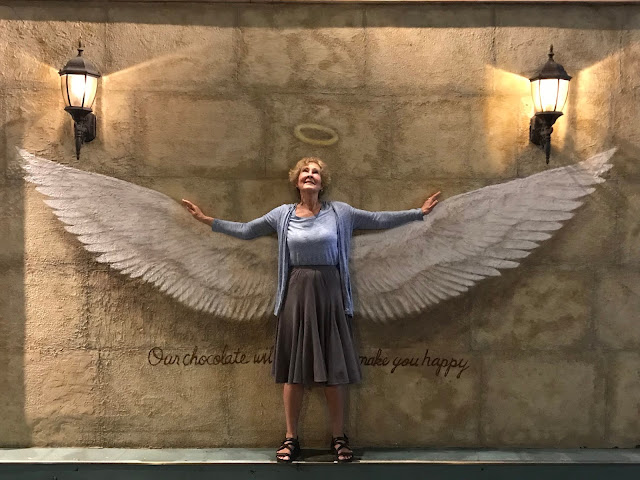 Retirement is hard work! After seven years of tireless effort Alice has a July 2019 publish date for "The Lady with Balls", her memoir, with Cypress House in Fort Bragg - and she loves working with them. They give her help and guidance she thought she could only get in her dreams. I'm inspired and learning from Alice's efforts and finally am diligently working on a growing-up-in-Point Arena memoir and a science and politics treatise "It Ain't Necessarily So."

We've had a busy travel year; three weeks in Japan in April and a September cruise down the Saint Lawrence River with Alice's Reseda High Reunion group. The photo above was taken outside a chocolate shop across the street from our Kyoto, Japan B and B. Alice saw some women posing in front of the wings having their pictures taken by their partners so she got in line, hopped up, struck a pose, and I snapped it - and we marveled at the result.

We stayed five nights at the New Sanno Hotel in the center of Tokyo. It's run by the U. S. military recreation unit and is unbelievable value for money, which explains why you have to book it a year ahead. 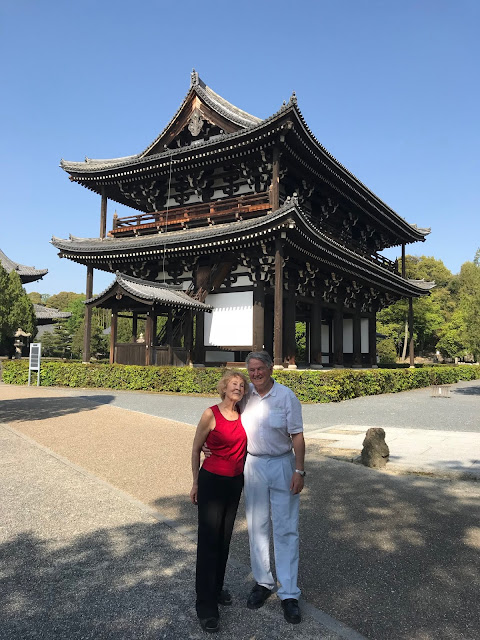 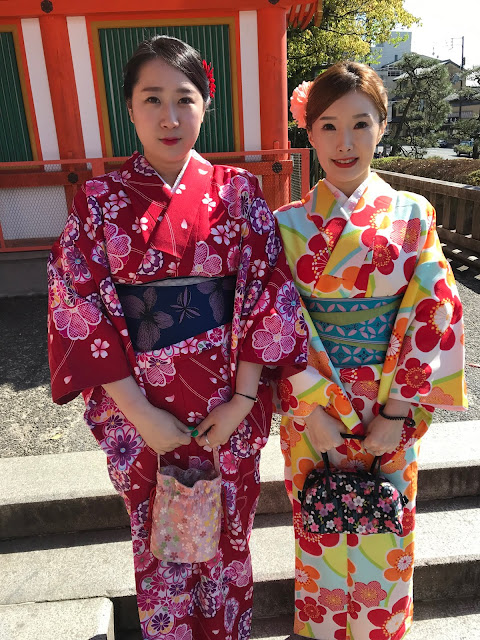 Kyoto is full of students, and many of them dress up to visit the shrines and parks 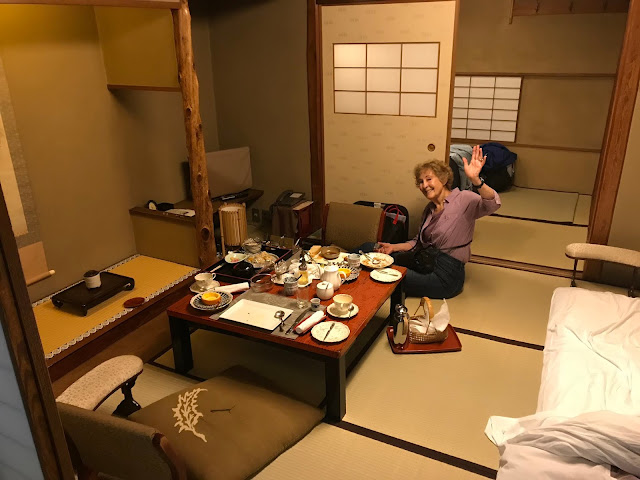 Our breakfast room became our bedroom, or vice versa 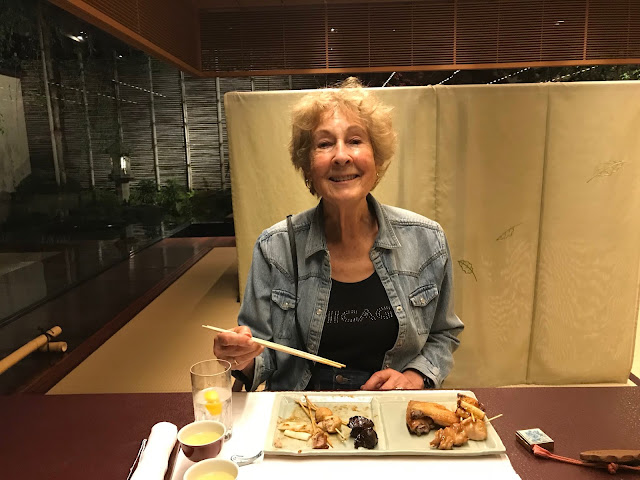 But this was our dining room, where we had about a dozen-course dinner nightly

Our Reseda High reunion cruise was themed "Fall Colors"and began at Quebec City, from whence we boarded the Royal Caribbean Adventure of the Seas with 3100 passengers and a huge crew. After cruising down the St. Lawrence River we visited Prince Edward Island, Nova Scotia, New Brunswick, Maine, Boston, Maine again, and disembarked in New Jersey. Alice made a mental note that she has to add Bar Harbor, Maine, and its classic hotel to her book tour plans. One of many highlights of our cruise was seeing the musical "Anne and Gilbert" at Charlottetown, Prince Edward Island, the land of "Anne of Green Gables." 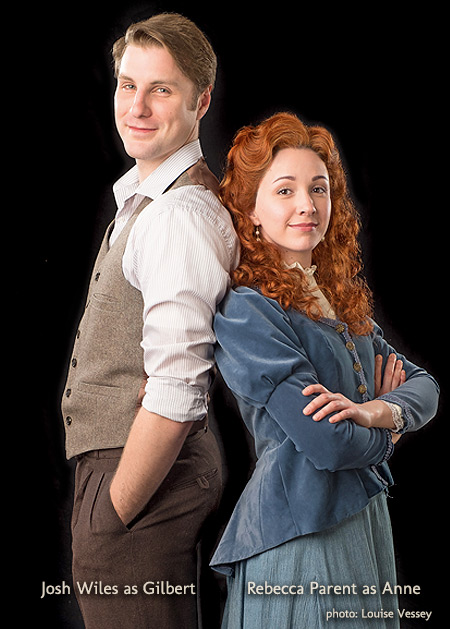 After our cruise ended we spent three nights in a hotel overlooking Times Square. We saw "Hamilton" - what a big disappointment. Doing a musical in rap may seem like a great way to appeal to a younger audience, but the dialogue is all delivered at the same breakneck speed and the emotions ranged from angry, really angry, and "you won't believe how angry I am", plus no memorable songs and uninspired dancing. Alice and I felt like "the Emperor has no clothes" type of people. The theater was next to our hotel, so at intermission we went to our room instead of standing in the long bathroom lines.

A block further down the street at the Al Hirschfeld Theater - I could have browsed the Hirschfeld posters in the lobbies for hours - we saw "Kinky Boots" and it was fabulous; great singing, great dancing, interesting and engaging story - too bad they didn't take that approach to "Hamilton." 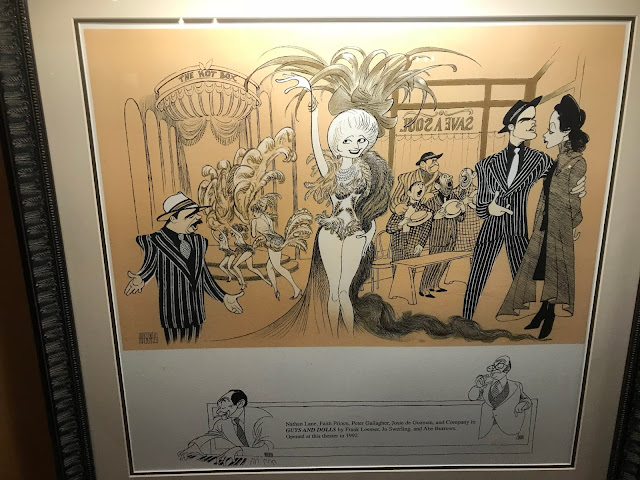 I enjoyed my roles as Lt. Brannigan, NYPD, Joey Biltmore, garage owner, and crapshooter in our Gualala Arts Center performances of "Guys and Dolls." Al Hirschfeld did posters for many editions of "Guys and Dolls" and this was one I shot in the lobby. 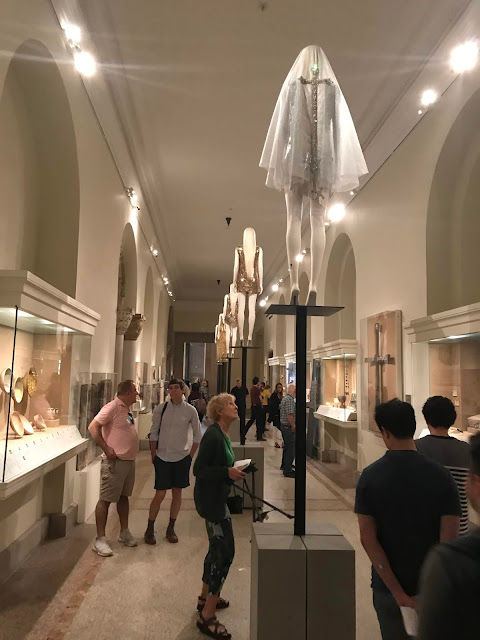 May 2019 we will spend a few days in Amsterdam then embark on a river cruise from Bonn, Germany, to Bucharest, Rumania. We'll get back in early June just in time for Alice to start her whirlwind book tours. In August we'll have a little break, but not from writing. We'll be at the annual Writer's Conference in Mendocino; a wonderful experience in a great location.

Somewhere in all this I hope to fit in another musical. My personal scorecard for the past four years is "Jekyll and Hyde", "Of Thee I Sing", "La Cage aux Folles" and "Guys and Dolls." I have two goals: the first is to keep going as an octogenarian - it won't be long - and the second is a solo or duet. I give Radar daily concerts at the beach to great success.

Alice is a natural actress but won't join in because she is a practical person and thinks that the endless rehearsals to deliver six performances is crazy, but I love the camaraderie of rehearsals and how everything miraculously comes together for those six performances.

Life's not always simple but the lemonade you make from the lemons you get makes a most delicious elixir.

Merry Christmas, Happy Hanukkah, and all the best wishes
from Michael, Alice and our little darling Radar. 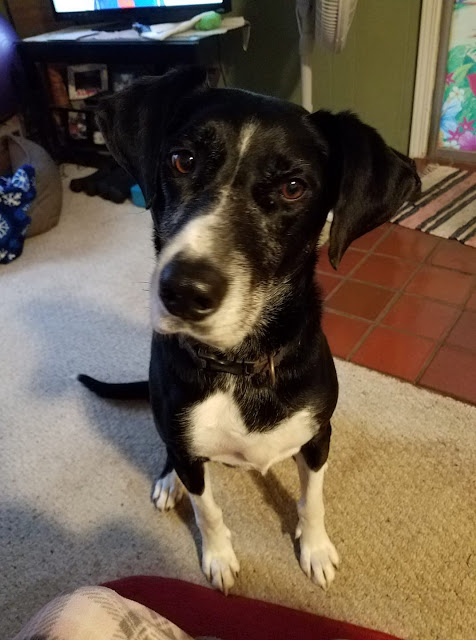 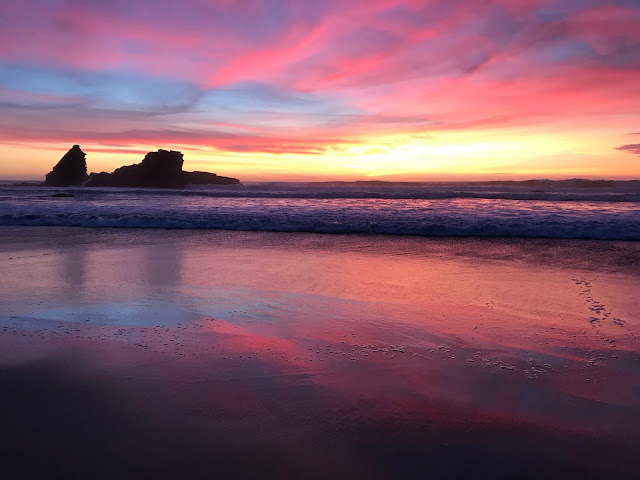 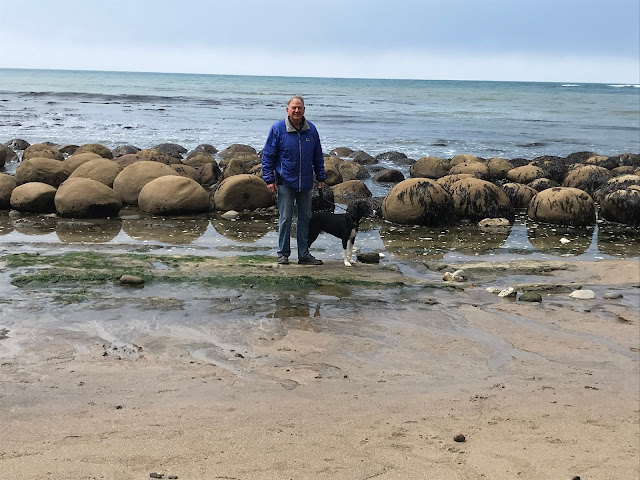 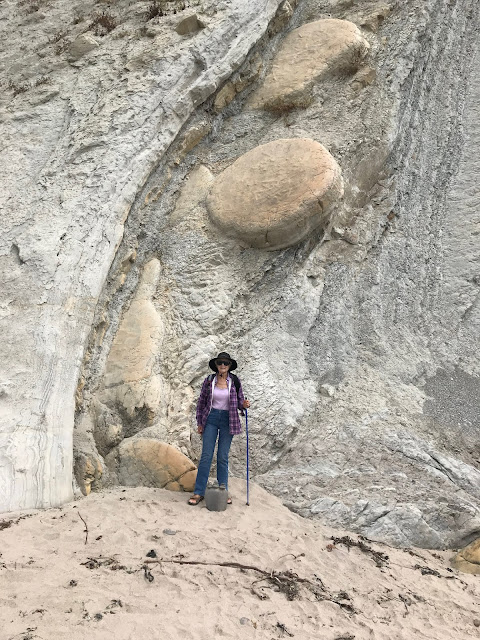 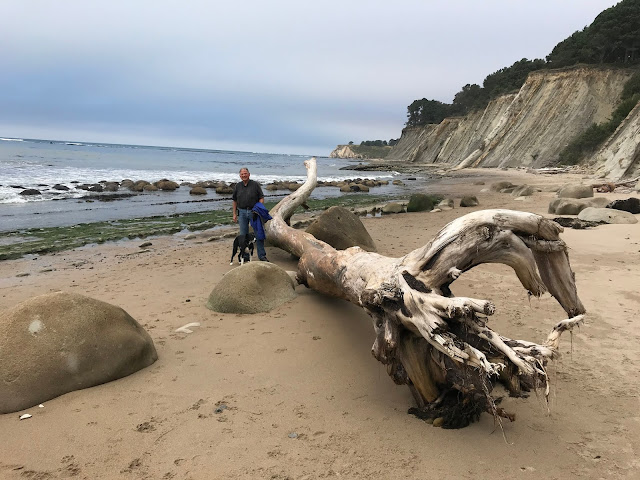 Excerpts from a Maxine Waters rant:
“Already, you have members of your Cabinet that are being booed out of restaurants,” she continued as the crowd erupted, “who have protesters taking up at their house, who say, ‘No peace, no sleep. No peace, no sleep,'” she continued."
“And so, let’s stay the course. Let’s make sure we show up wherever we have to show up and if you see anybody from that Cabinet in a restaurant, in a department store, at a gasoline station, you get out and you create a crowd and you push back on them, and you tell them they’re not welcome anymore, anywhere,” she yelled."
And I thought we defeated the Third Reich. I wonder if she will try to make Republicans wear a red "R" when we're out in public so we can be properly scorned.

I admit to a gross violation of Godwin's Law:

Godwin's law (or Godwin's rule of Hitler analogies) is an internet adage asserting that "As an online discussion grows longer, the probability of a comparison involving Hitler approaches 1"; that is, if an online discussion (regardless of topic or scope) goes on long enough, sooner or later someone will compare someone ... (to Hitler or the Third Reich).

Why should the left have all the fun? This is tit-for-tat, childish but somehow satisfying.
Posted by Major Combs at 6:36 PM No comments:

The Climate Models Suck - And They Admit It!

THEY BLEW IT! A new study in Nature by some prominent alarmists concludes that the climate models overestimate warming.
"We conclude that model overestimation of tropospheric warming in the early twenty-first century is partly due to systematic deficiencies in some of the post-2000 external forcings used in the model simulations." Translation = the models miss stuff, and their mistakes cost $trillions. https://www.nature.com/…/j…/vaop/ncurrent/full/ngeo2973.html
Posted by Major Combs at 6:28 PM No comments:

I sent this to the Letters to Editors of the San Francisco Chronicle because I was appalled by Willie Brown's comment about customers needing to be taught lessons by restaurant kitchen staff. According to Willie, they establish themselves as judge, jury, and executioner when they don't like certain customers.

Please ask Mr. Brown what restaurant employees do to dishes for customers who need to be taught a lesson. Also, would Mr. Brown be good enough to describe the nature of the lesson taught? Is it adding a substance to sicken the customer? Ruin its taste? Pass along illness?

I’m appalled that such  comment passed editor review. Apparently the Chronicle has no problem with it. Sad.

This is the excerpt written by Willie Brown:
Chef’s special: Style points for stupidity for Homeland Security Secretary Kirstjen Nielsen, giving a news conference filled with legalisms about why the administration just had to split up families at the southern border, then heading to dinner at a Mexican restaurant.
Activists found out where she was in no time, showed up to heckle her, and eventually chased her out.
She should thank them for saving her life. I’ve worked in restaurants, and I know what happens in the kitchen to the dishes for customers who need to be taught a lesson.
Posted by Major Combs at 4:24 PM No comments: