CARGO CULT SCIENCE, by Richard Feynman, was presented at Caltech commencement in 1974. In it he defined Cargo Cult Sciences as theories that don't work, and science that isn't science.

What are Cargo Cult Sciences missing? Scientific integrity, a principle of scientific thought that corresponds to utter honesty; leaning over backwards. For example, in an experiment you should report everything that you think might make it invalid; not only what you think is right about it: other causes that could possibly explain your results; and things you thought of that you've eliminated by some other experiment, and how they worked--to make sure the other fellow can tell they have been eliminated.

AGW has become – probably always has been – a Cargo Cult Science. Examples of past warmer periods have been ignored or dismissed. Recent periods of cooling during heightened levels of atmospheric CO2 have been mated to strained explanations involving aerosols, etc. Recent low levels of Arctic ice create panic even though lower Arctic ice was previously reported – 1922 for just one example. AGW links were forged to Katrina, Midwestern tornados, Himalayan glaciers, Amazon rain forests, African agriculture, Mount Kilimanjaro ice cap, Bangladesh sea level, without mention that there were sounder scientific explanations for these anomalies.

And these are anomalies only in light of ignorance of climate history.

Like the true Cargo Cult believers, the AGW true believers gather in worshipful expectancy of catastrophes that will never come, while practicing rituals that do nothing to alter the direction of natural climate change.
Posted by Major Combs at 9:59 PM No comments:

For many of my Air Force years, the military newspaper Stars and Stripes was my local paper. I looked forward to it every day, in Turkey, the United Kingdom, and in other lands where duty ocassionally called me - Germany, Japan, Korea, The Phillipines. By then World War II was already almost two decades past, but the Stars and Stripes was still there as our link to "home."

Bill Mauldin famously cartooned for Stars and Stripes during the war, and published a book Up Front of "Willie and Joe" cartoons in 1945. Pop read Up Front to me - explaining the cartoons while giving me history lessons - sometime around 1950 when we were living in the old abandoned Point Arena High School building.

The following tribute to Bill Mauldin was written by Bob Greene, author and award-winning columnist for the Chicago Tribune.

The post office gets a lot of criticism. Always has, always will.

And with the renewed push to get rid of Saturday mail delivery, expect complaints to intensify. But the United States Postal Service deserves a standing ovation for something that's going to happen this month. Bill Mauldin is getting his own postage stamp. 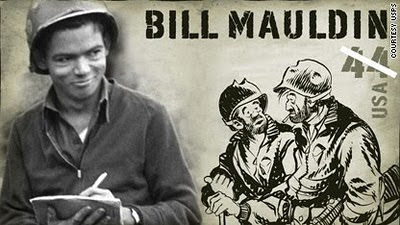 Mauldin died at age 81 in the early days of 2003. The end of his life had been rugged. He had been scalded in a bathtub, which led to terrible injuries and infections; Alzheimer's disease was inflicting its cruelties. Unable to care for himself after the scalding, he became a resident of a California nursing home, his health and spirits in rapid decline.

He was not forgotten, though. Mauldin and his work meant so much to the millions of Americans who fought in World War II, and to those who had waited for them to come home. He was a kid cartoonist for Stars and Stripes, the military newspaper. Mauldin's drawings of his muddy, exhausted, whisker-stubbled infantrymen, Willie and Joe, were the voice of truth about what it was like on the front lines. 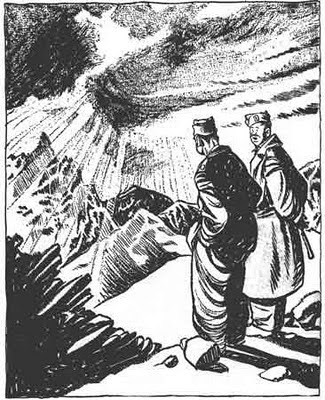 Beautiful view. Is there one for the enlisted men?
Mauldin was an enlisted man just like the soldiers he drew for; his gripes were their gripes, his laughs were their laughs, his heartaches were their heartaches. He was one of them. They loved him. 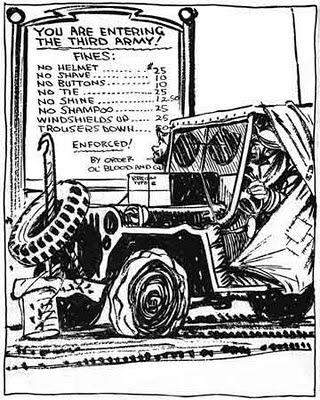 Radio th' ol' man we'll be late on account of a thousand-mile detour.
He never held back. Sometimes, when his cartoons cut too close for comfort, his superior officers tried to tone him down. In one memorable incident, he enraged Gen. George S. Patton, and Patton informed Mauldin he wanted the pointed cartoons -- celebrating the fighting men, lampooning the high-ranking officers -- to stop. Now.The news passed from soldier to soldier. How was Sgt. Bill Mauldin going to stand up to Gen. Patton? It seemed impossible.

Not quite. Mauldin, it turned out, had an ardent fan: Five-star Gen. Dwight D. Eisenhower, supreme commander of the Allied forces in Europe. Ike put out the word: Mauldin draws what Mauldin wants. Mauldin won. Patton lost.

If in your line of work you've ever considered yourself a young hotshot, or if you've ever known anyone who has felt that way about himself or herself, the story of Mauldin's young manhood will humble you. Here is what, by the time he was 23 years old, Mauldin had accomplished:

He won the Pulitzer Prize. He was featured on the cover of Time magazine. His book "Up Front" was the No. 1 best-seller in the United States.

All of that at 23. Yet when he returned to civilian life and he grew older, he never lost that boyish Mauldin grin, he never outgrew his excitement about doing his job, he never big-shotted or high-hatted the people with whom he worked every day. I was lucky enough to be one of them; Mauldin roamed the hallways of the Chicago Sun-Times in the late 1960s and early 1970s with no more officiousness or air of haughtiness than if he was a copyboy. That impish look on his face remained.

He had achieved so much. He had won a second Pulitzer Prize, and he should have won a third for what may be the single greatest editorial cartoon in the history of the craft, his deadline rendering on the day President John F. Kennedy was assassinated of the statue at the Lincoln Memorial slumped in grief, its head cradled in its hands. But he never acted as if he was better than the people he met. He was still Mauldin, the enlisted man.

During the late summer of 2002, as Mauldin lay in that California nursing home, some of the old World War II infantry guys caught wind of it. They didn't want Mauldin to go out that way. They thought he should know that he was still their hero.

Gordon Dillow, a columnist for the Orange County Register, put out the call in Southern California for people in the area to send their best wishes to Mauldin. I joined Dillow in the effort, helping to spread the appeal nationally so that Bill would not feel so alone. Soon more than 10,000 letters and cards had arrived at Mauldin's bedside.

Even better than that, the old soldiers began to show up just to sit with Mauldin, to let him know that they were there for him, as he, long ago, had been there for them. So many volunteered to visit Bill that there was a waiting list. Here is how Todd DePastino, in the first paragraph of his wonderful biography of Mauldin, described it:"Almost every day in the summer and fall of 2002 they came to Park Superior nursing home in Newport Beach, California, to honor Army Sergeant, Technician Third Grade, Bill Mauldin. They came bearing relics of their youth: medals, insignia, photographs, and carefully folded newspaper clippings. Some wore old garrison caps. Others arrived resplendent in uniforms over a half century old. Almost all of them wept as they filed down the corridor like pilgrims fulfilling some long-neglected obligation.

"One of the veterans explained to me why it was so important: "You would have to be part of a combat infantry unit to appreciate what moments of relief Bill gave us. You had to be reading a soaking wet Stars and Stripes in a water-filled foxhole and then see one of his cartoons.

"Mauldin is buried in Arlington National Cemetery. This month, the kid cartoonist makes it onto a first-class postage stamp. It's an honor that most generals and admirals never receive.

What Mauldin would have loved most, I believe, is the sight of the two guys who are keeping him company on that stamp.

Take a look at it. There's Willie. There's Joe.

And there, to the side, drawing them and smiling that shy, quietly observant smile, is Mauldin, himself, with his buddies, right where he belongs. Forever.

The opinions expressed in this commentary are solely those of Bob Greene. And me. And a lot of other guys.
Posted by Major Combs at 8:37 PM No comments:

Email ThisBlogThis!Share to TwitterShare to FacebookShare to Pinterest
Labels: Tributes

Increasing CO2 can't cause global warming - the Vostok ice cores show warming precedes rising CO2, not vice versa. Since water vapor is by far the predominant greenhouse gas (95%), and can increase quickly and in huge quantities - just add heat from the sun to the 40% of the earth's surface not shielded by clouds - increased CO2 adds no net increase to warming.

Climate scientist and Hungarian, Dr. Miklos Zagoni in his paper “CO2 Cannot Cause any more “Global Warming”” dated December 2009 describes this discovery and its meaning. Dr. Zagoni beautifully sums it all up: “Since the Earth’s atmosphere is not lacking in greenhouse gases [water vapor], if the system could have increased its surface temperature it would have done so long before our emissions. It need not have waited for us to add CO2: another greenhouse gas, H2O, was already to hand in practically unlimited reservoirs in the oceans.”

For further explanation of natural climate change, the Pacific decadal oscillation and other periodic fluctuations (see the Maunder Minimum and sun spot activity) complete the picture. How the simple and simplistic coincidence of 150 years of warming (following the Little Ice Age) with 50 years of rising CO2 (during which temperatures fell almost as often as they rose) could be considered proof of the need to drastically and expensively (and vainly) change all aspects of human existence is ludicrous. The genius of humanity is in adapting to, not denying, the natural forces of change. It is preposterous to think that the current climate is the optimum when we have indisputible proof that climate has and will constantly change.Read more:
Posted by Major Combs at 10:16 PM No comments:

Using GPS methodology, a team of French, Spanish, and UK scientists funded by the French Space Agency found that sea level rise is approximately 1.6 millimeters per year, or six inches per century. That's about nineteen and a half feet short of Al Gore's apocalyptic prognostication.

Since the rate of sea level rise has been steady at about six inches per century since the end of the Little Ice Age (about 1850), this latest finding comes as no surprise to anyone but the alarmists. However, I doubt it will get front-page coverage complete with color-coded maps in the San Francisco Chronicle like the earlier, totally scientifically unsupported, predictions of Bay Area sea level rise of three to four feet by 2100.
Posted by Major Combs at 4:23 PM No comments:

Global Warming - Natural or Man Made?

It really is very simple. If the believers in anthropogenic global warming can demonstrate that the two statements below are true, they would shut up their critics fast. Of course, we know both statements are false and that forms the basis for our disbelief in man-caused global warming.

(1.) There is no evidence of historic temperature increases or temperature levels similar to what we have observed in the past 40 years that could arise from natural causes.

Why are we required to prove that the 150 years of sporadic warming following the end of the Little Ice Age (1850) is not caused by increased atmospheric carbon dioxide from human activities when the eight periods of similar (often greater) warming during the past 20,000 years obviously were not?

For the historically challenged, the answers to both questions are "No!"
Posted by Major Combs at 6:01 PM No comments: