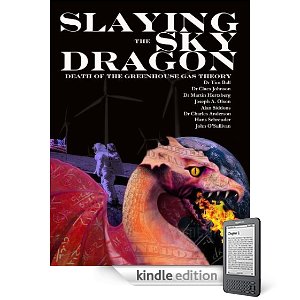 I'm having a very enjoyable exchange on Amazon.com concerning reviews of "Slaying the Sky Dragon - Death of the Greenhouse Gas Theory."

One reviewer commented:
"you can transfer energy to the earth from a reflective green house layer even if the energy level of the earth is higher."


To which I replied: (The charts I show are not part of my Amazon reply because I could not load them on Amazon. I wish I could. They support my replies very well)
"This reviewer confuses insulation with reflection. He also confuses a greenhouse which prevents the air warmed by the heated earth from mixing with the outside air, with the insulating effect provided primarily by water vapor in the atmosphere. If he would look at the historical record he would find many periods when warming began long before CO2 increased, and when cooling began when CO2 was much higher. In both cases warming and cooling soon - in 800 years or so - caused the oceans to release or absorb CO2, respectively.

If CO2 has always been driven by climate change, and has never been the driver, how did it get behind the wheel now when even current levels of CO2 are historically very low? It is much easier to understand current warming of one degree F per century to be a rebound from the end of the Little Ice Age 300 years ago, than as a product of a very recently increase of an atmospheric trace gas.

Compare a night in an equatorial desert to a humid, summer night in Michigan - the atmosphere above each containing the same tiny concentration of CO2 - and then determine what you want to do with your coat. It goes on, in the desert, and stays off in Michigan. And water vapor does its balancing magic, just as it has for billions of years.

My reply generated the following from "Freedom Ride":
The commenter fails to understand radiative forcing, fails to recognize that this massive, geologically near-instantaneous increase in GHGs is unique in climate history, fails to recognize the fundamental difference between H2O and the other GHGs, and apparently does not know that the increasing absolute humidity is a feedback effect of increasing concentrations of the persistent GHGs, principally CO2.


In short, Mr. Combs does not know what he is talking about. He *is* skilled at repeating some rather old, shop-worn denier talking points, at least. No doubt he finds them reassuring, bless his heart.

Which inspired me to reply:
Freedom Ride makes many misstatements, none more egregious than that the increase in CO2 is unique, since for most of the Earth's history atmospheric CO2 has been multiples higher. The fundamental difference between H2O and other so-called greenhouse gases is that H2O comprises over 95% of the total, and that the increase of water vapor from warming provides a negative feedback through clouds and through heat transport in the atmosphere to increased warming.


Freedom Ride continues the alarmist method of making sweeping statements without providing any observational proof or support. As an example, the existence of six periods of greater warming since the end of the Ice Age just over 10,000 years ago are robustly supported by world-wide studies, as is the fact that these periods were characterised by stable atmospheric CO2. 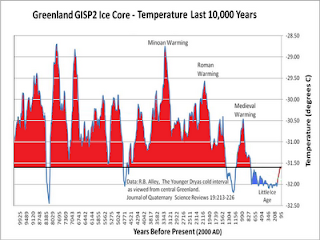 Current sea level rise is unremarkable at eight inches per century and slowing, and can be compared to 420 feet of increase since the end of the Ice Age - an average of over four feet per century. 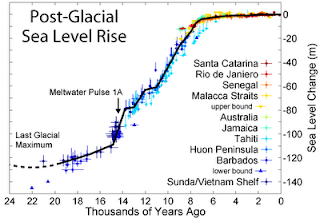 Also sea level studies have shown coral thrived about 6,000 years ago three to six feet above what is now sea level. Even an alarmist must concede that higher sea level then, evidenced by coral growth, proves greater warmth then.

My points are not old, shop-worn denier talking points. They have come from the reading of numerous compilations of historical facts by such climate greats as H. H. Lamb, and primarily are just repititions of what the Earth is telling us. Vineyards in England 1,000 years ago, where they fail today, is a fact that knows no politics.

Soon Freedom Ride replied:
Again, Combs reveals his ignorance. He apparently does not know (unsurprising, since apparently he gets his information from non-scientific sources) that in ancient times of much higher CO2 concentrations, insolation was much lower.

Combs posts a number of non sequiturs and moldy-oldie denialist assertions which may be disregarded. He's is an AGW denier, the intellectual equivalent of HIV/AIDS deniers, evolution deniers, moon landing deniers, etc. He employs the same tactics: anomaly hunting, cherry picking, Gish galloping and flat-out bs'ing. He is an ideologue--a Libertarian, perhaps?--oppressed by the irresistible march of science. Science is his enemy: he carefully ignores the unanimous, published affirmations of every major scientific professional association in the world. He searches the internet for comforting propaganda, which he presents here to insulate himself from cognitive dissonance. While it may satisfy him, it is transparently silly to anyone aware of the facts.

And I immediately countered:
"Combs reveals his ignorance. He apparently does not know (unsurprising, since apparently he gets his information from non-scientific sources) that in ancient times of much higher CO2 concentrations, insolation was much lower."

"Insolation has varied around a constant long-term mean and has followed the same tilt and precession cycles for millions of years. Consequently, its fundamental character has stayed the same. As a result, we can use the same insolation curve throughour the full 3-Myr history of northern hemisphere glaciation illustrated by this conceptual model."

Mr. Ride. So far I have seen no science in any of your posts. Will any be forthcoming?

Has Mr. Ride gotten off the bus, or is he finally searching for some facts to throw back at me?

This Amazon exchange is very satisfying. If I presented similar comments on a website like Realclimate.com, they would never be posted.
Posted by Major Combs at 6:49 PM No comments:

The media have all but announced Obama reelected. Not for any Obama accomplishments. In fact, the media are getting pretty good now at chronicling his lack thereof:


No, the media are conceding victory to Obama because they deem the Republican field of candidates weak.

If memory serves, the media said the same prior to Jimmy Carter standing for reelection. President Reagan defeated Jimmy easily. And for George H. W. Bush - the only real opposition were Republicans Perot and Buchanan, which let Bill Clinton slip right in. When Clinton ran for reelection he was so unpopular following the Hillarycare debacle and Republican takeover of Congress in 1994 that Republicans were sure any Republican could beat him, and ran the only one who couldn't.

But the Republican field is not weak. As Ramesh Ponnuru notes, the top Republican candidates all have extensive executive experience as governors. He contrasts this to the zero years of executive experience of the three Democrats in 2008, Obama, Hillary, and Edwards. Based on their records the past three years, none of them have improved their positions, although Hillary is looking much better to Democrats in comparisons to Obama.

Two things are obvious concerning Election 2012: Republicans will dominate election coverages, and from this crucible a powerful candidate will emerge stronger and sharper from enduring the white-hot forge of competition.

But isn't that what competition achieves?

The good become better, and the best become unbeatable.
Posted by Major Combs at 11:42 AM No comments:

Email ThisBlogThis!Share to TwitterShare to FacebookShare to Pinterest
Labels: Dimocrats, Politics as usual

"When school children start paying union dues, that's when I'll start representing the interests of school children." So said the late Albert Shanker, founder and long-time president of the United Federation of Teachers, and later also president of the American Federation of Teachers. But he also said: "A lot of people who have been hired as teachers are basically not competent." Of course he still worked unceasingly to keep the incompetents paying union dues.


The fact that the California Democrat Party is a wholly owned union subsidiary was again demonstrated this past week. A bill to allow school districts to use performance rather than seniority as a criterion for laying off teachers didn’t get six votes and died in committee. Three Republicans voted for, two Democrats against, and five Democrats abstained.

California Teachers Association members left their classrooms to pack the hearing room to voice their opposition, but needn’t have bothered - campaign records show that Democrats on the committee received $176,200 from the two largest teachers’ unions since 2004. Republicans got zip.

Shanker would have applauded.
Posted by Major Combs at 11:18 AM 1 comment:

Global Warming - Much Ado About Nothing

Sometimes the best proof can be found in the camp of the enemy, crafted by their hands.


When the discussion is of global warming, the first point to examine is: "Is it warming?"

The answer is "Yes, and it has been for about 200 years since the end of the Little Ice Age."

That should answer the next question: "Is the warming man-caused or natural."

Since no studies of the Medieval Warm Period or Little Ice Age have hypothesized let alone proven changes in atmospheric CO2 as causation, the inevitable conclusion is that natural climate change forces were at work.

Now, how much natural warming is there?

According to United States government statistics, and their NOAA Satellite and Information Service website, the United States has been warming at a rate of one degree Fahrenheit per century for the past 116 years.

One degree Fahrenheit per century.

One degree Fahrenheit per century?

Is this a big deal?

Al Gore says catastrophes are coming because of this warming.

One degree Fahrenheit per century?

When Al Gore is faced with reports of numbing cold and record snow, he says "Weather is not climate."

However, when Katrina hit, or Australia suffered drought, or fires burned out of control in Russia, Al said these are signs of global warming.

Come to think of it, now Al claims that any unusual weather is proof of global warming.

In that regard, so does Dr. Kevin Trenberth.

Desperation is rampant in the camps of the true believers in anthropogenic global warming.

They are dying for Nature to throw them a crumb.

The latest direct hit they are taking is a study that shows warming reduces the strongest winds. That is part of the explanation of why hurricanes and tornados have been so quiet for several years. That plus normal cyclical variations that track well to a natural 30-year cycle of increasing and decreasing storm energy. 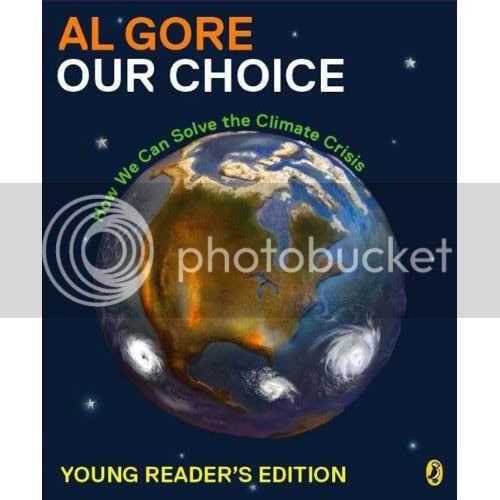 Of interest in the study was a photo of the cover of Gore's book "Our Choice - How We Can Solve The Climate Crisis (Young Reader's Edition)." In keeping with Al's hurricane obsession, it shows three northern hemisphere hurricanes. Two are rotating counter-clockwise, and one clockwise. That is definitely a first for northern hemisphere hurricanes. Prior to Al and his expertise, they all rotated the same direction.

Two out of three, or 67%, is about what one would expect from the mediocre student Al was in his collegiate days.

Having a U S Senator for a father really helps when your grades are too low to get you into Harvard,  doesn't it Al?
Posted by Major Combs at 3:50 PM 1 comment: 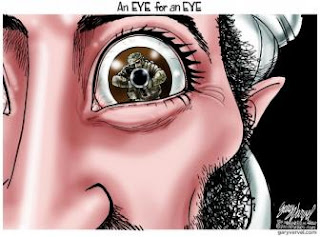 Rendition worked! Water boarding in a secret overseas prison led to Osama Bin Laden’s last trip: a slide down a different sort of board into a watery grave. Thanks, President Bush. Mission accomplished.
Posted by Major Combs at 1:23 PM 1 comment: