Not long after Alice and I wed twenty-five years ago we made an agreement that we would live to be 110. With the way life has been going for us, we may have to add some more years to our agreement. As we age, our enjoyment of life and its experiences just keeps growing, our interests expand, and we want to experience as much of the future as we can to see how it all works out. 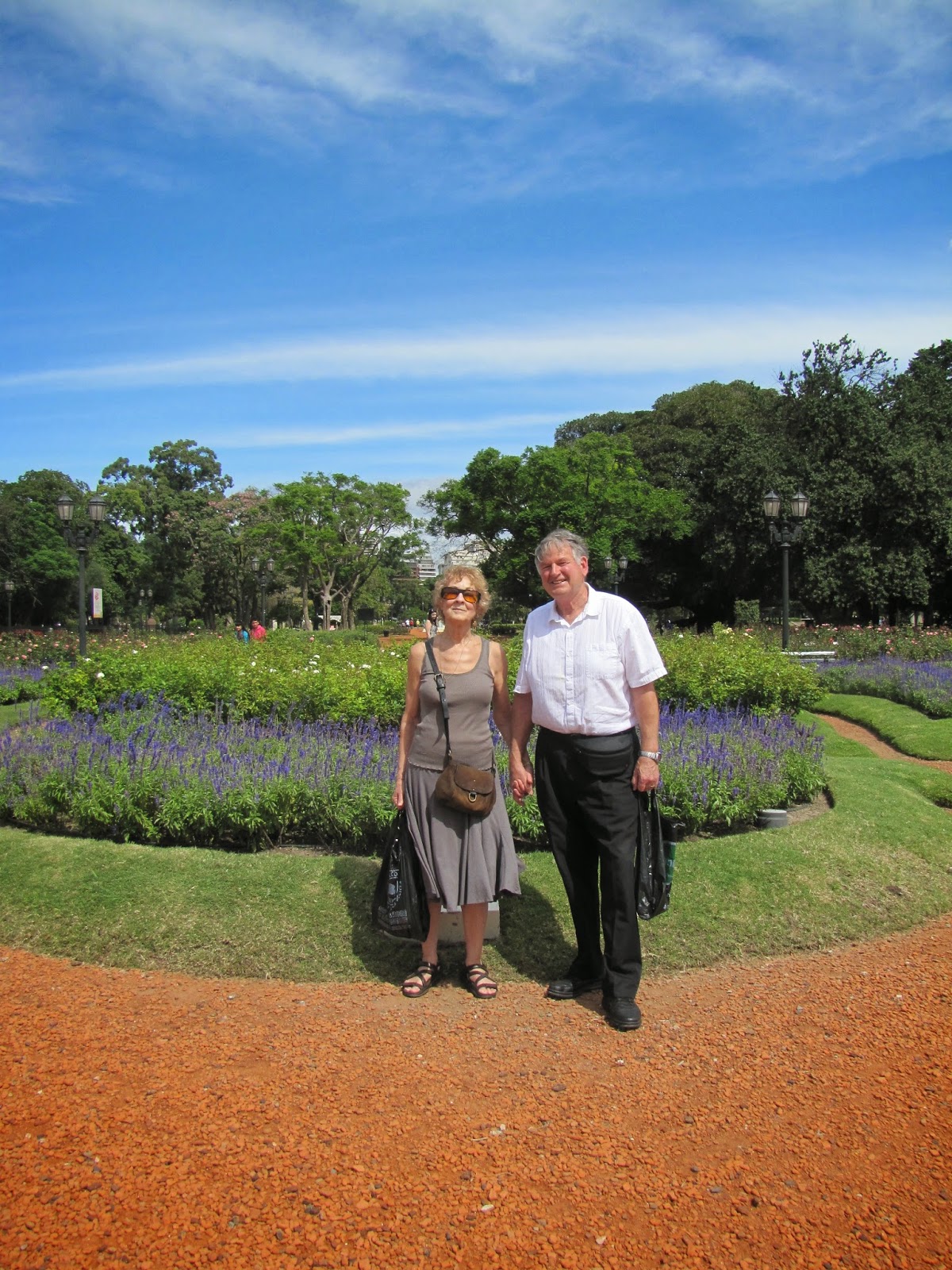 A park near our apartment. One of over 600 in Buenos Aires
(please click on each photo to enlarge it)

In February and March we went to Antarctica, but first spent a week in Buenos Aires in an apartment in the Palermo district. We took a city bus to the funky part of town, La Boca, but since our apartment was very centrally located and was walking distance to many interesting sights and parks, we walked all over the place. At the end of the week we joined our Lindblad/National Geographic Antarctic expedition group, and they took us to La Boca again and to other Buenos Aires sights, like the Casa Rosada - in my mind's eye I could see and hear Evita on the balcony signing for Argentina to not cry for her - and then we went to her grave. 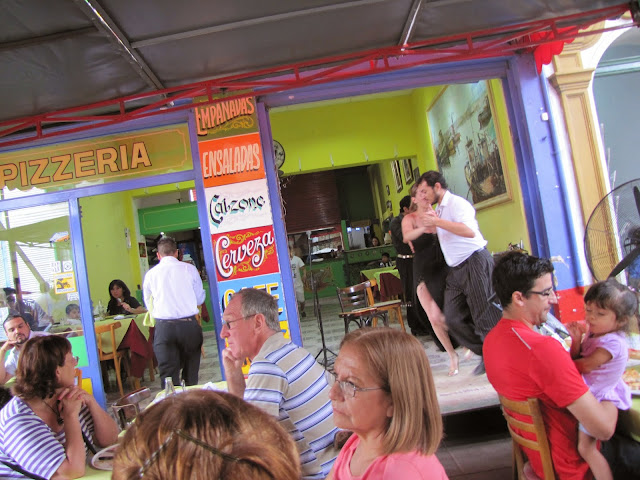 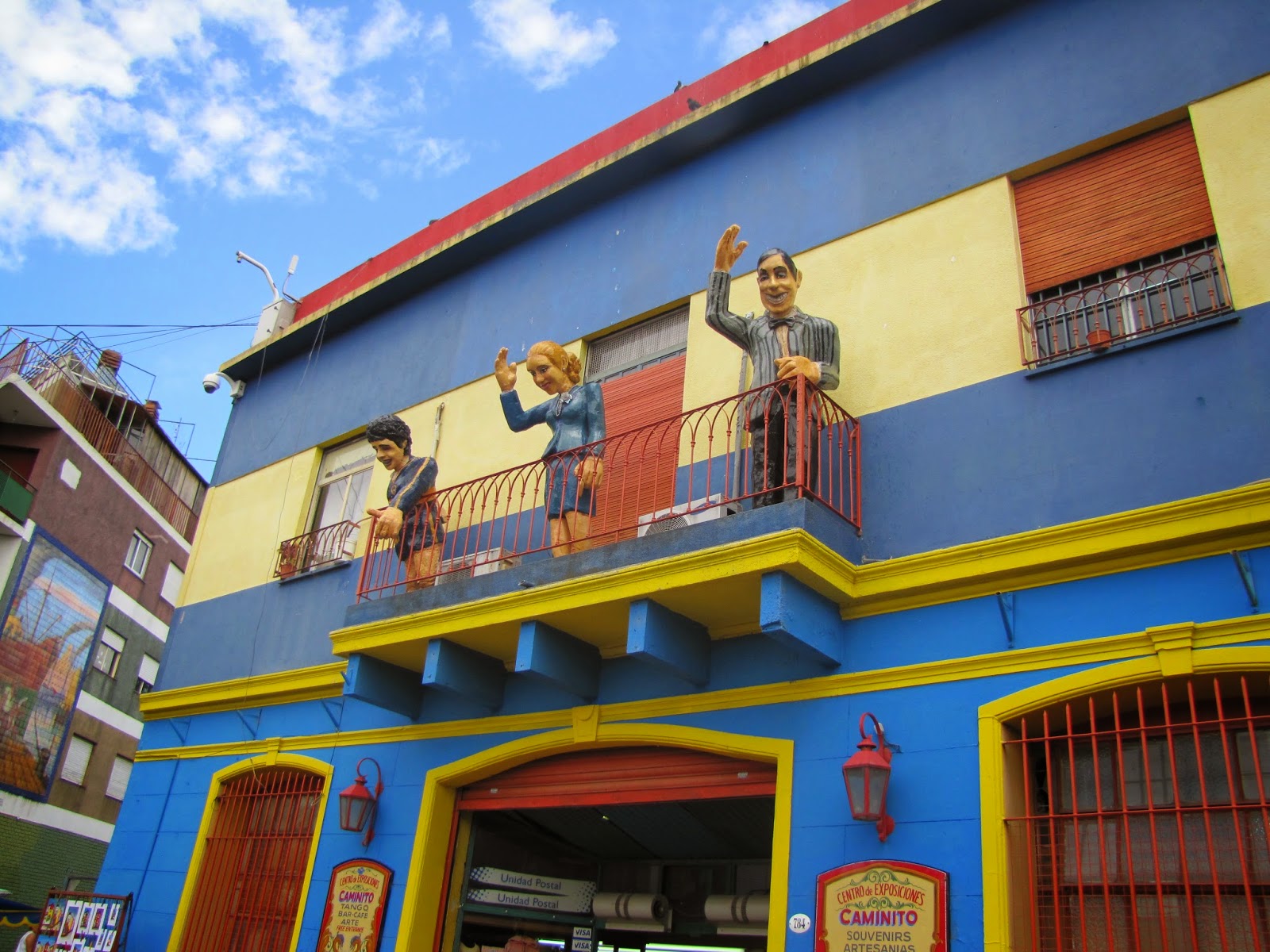 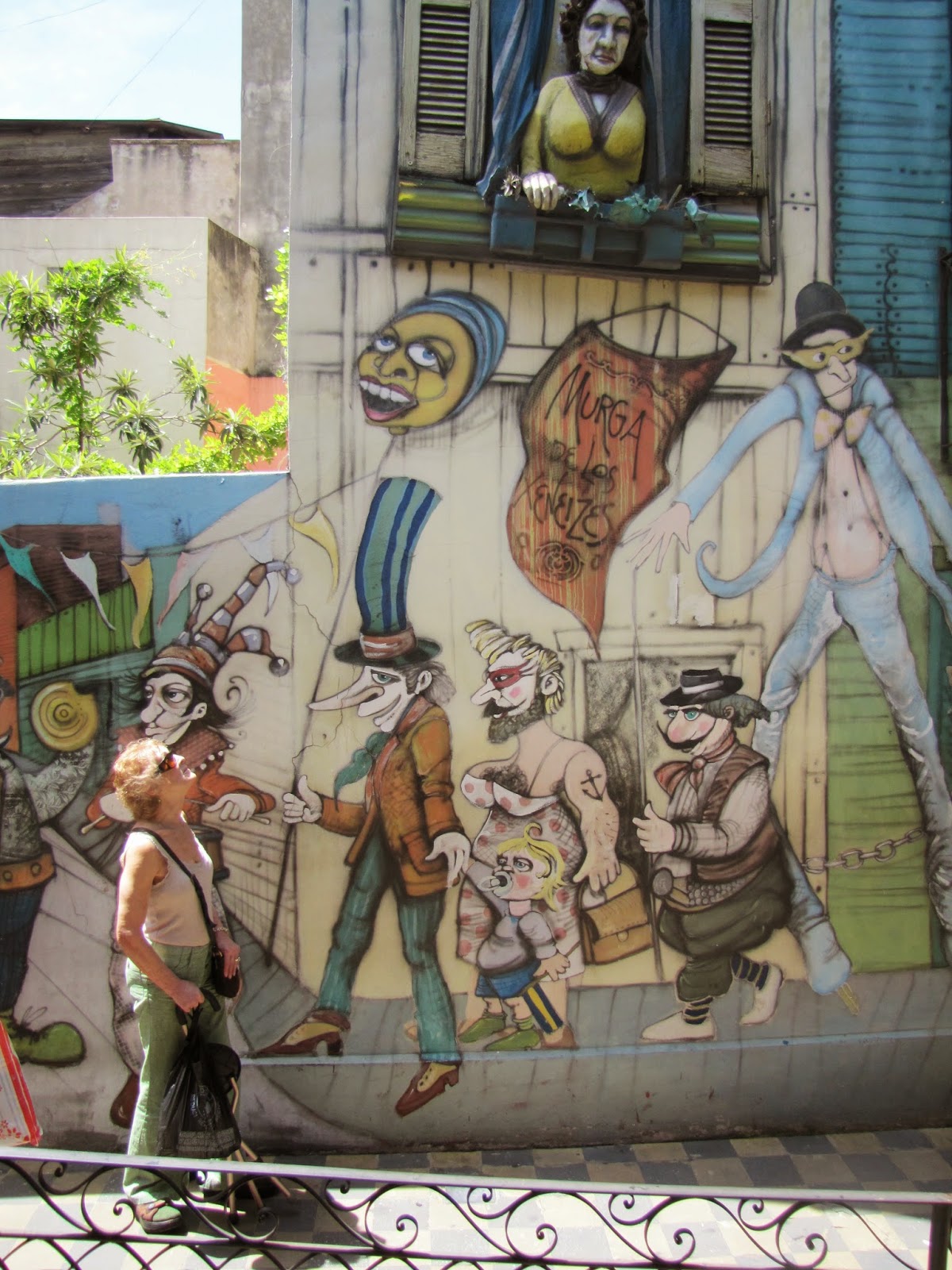 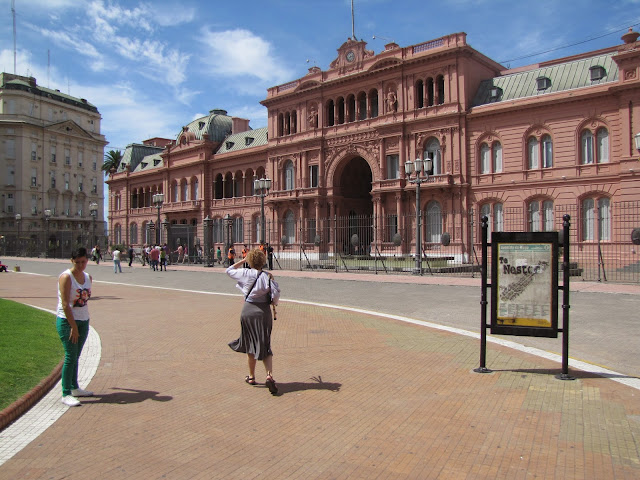 Then it was time to board our flight to the end of the world, Ushuaia (hard to spell, even harder to pronounce), to board our ship, the National Geographic Explorer, and disembark across Drake's Passage to Antarctica with 146 other adventurous and hardy souls, and a willing crew plus a small army of very able naturalists. I was delighted that they, and some special guests on the voyage were all adherents to the National Geographic man-caused global warming religion, so I did not have to look far to find a discussion/argument. 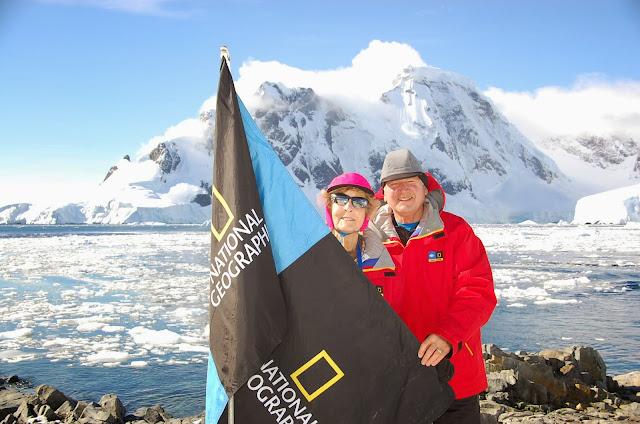 The highlight guest was James Balog, whose film "Chasing Ice" was shown many times during our voyage. It's basically almost an hour of filming the Jakobshaven glacier in Greenland calving spectacularly. Very interesting, except Balog portrays it as due to man-caused global warming, and never mentions that this glacier retreated much farther before 1900 than after, which is known as lying by omission. 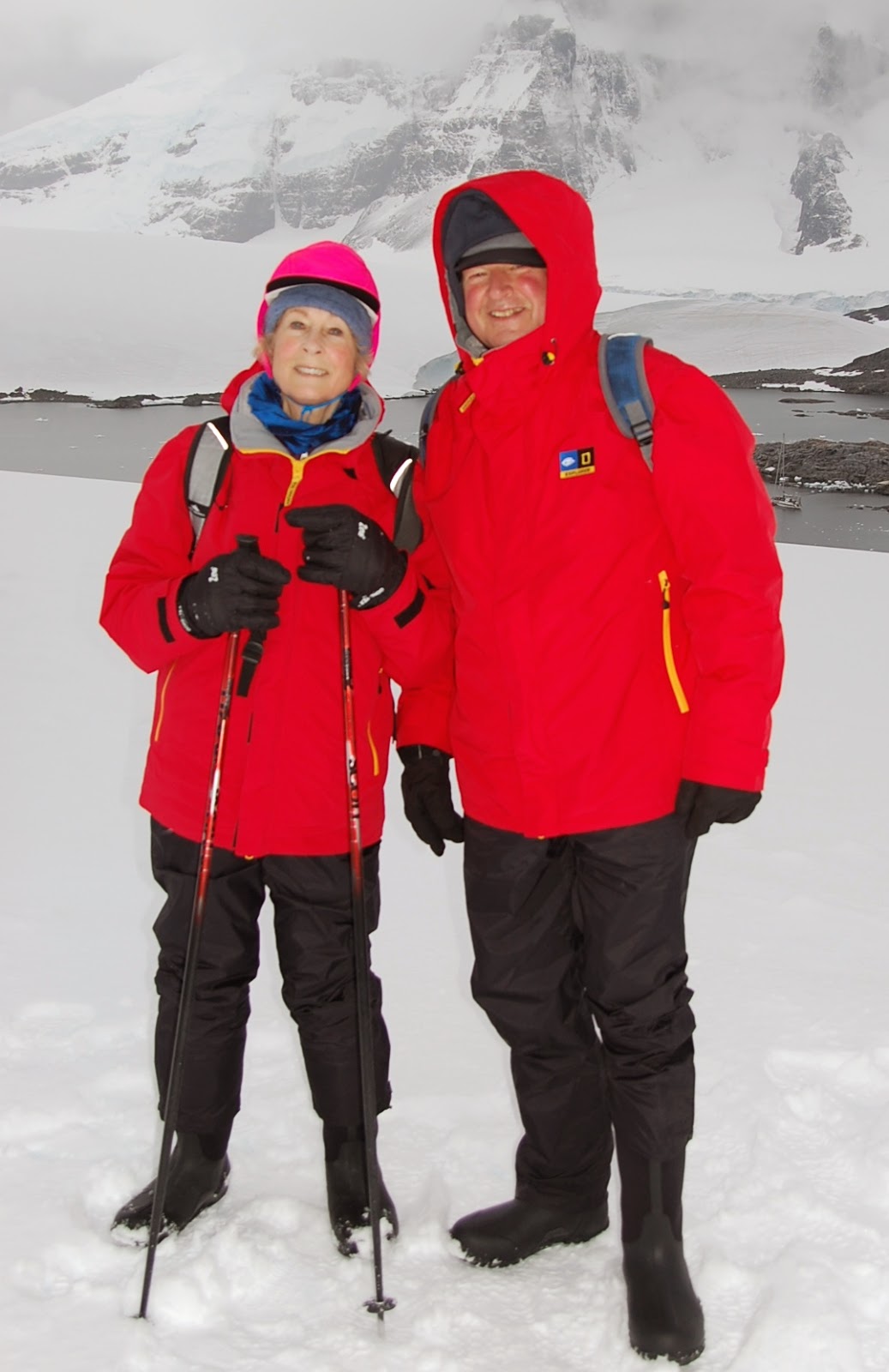 The stylish couple in Antarctica

The ice, the sea and land creatures, their unbelievable abundance, exceeded expectations. Besides Antarctica we enjoyed visiting South Georgia Island and the Falklands. 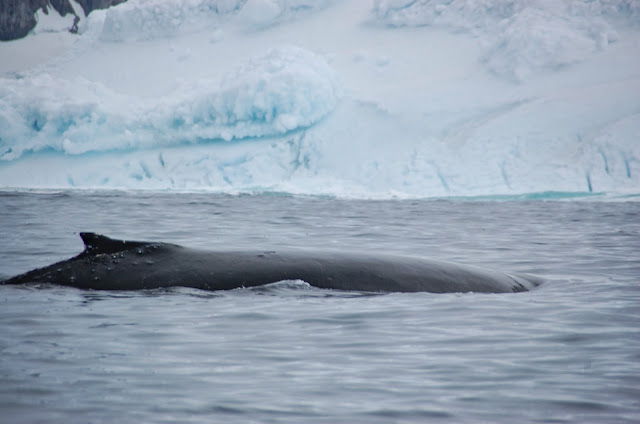 One of many humpbacks cruising by 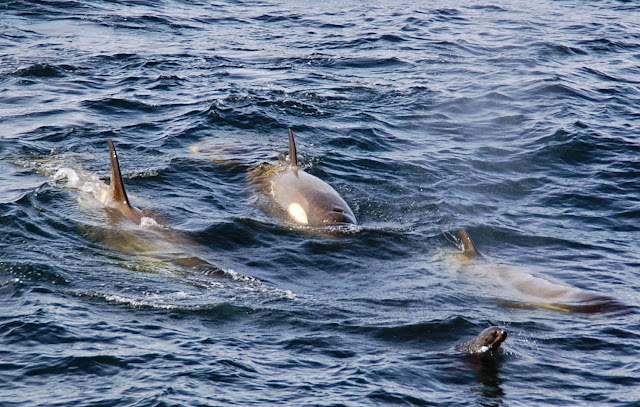 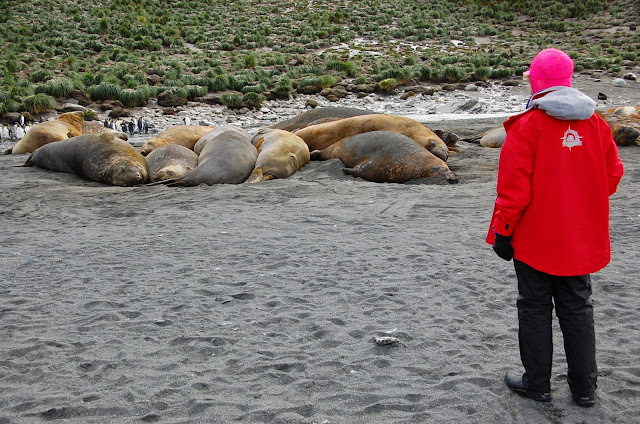 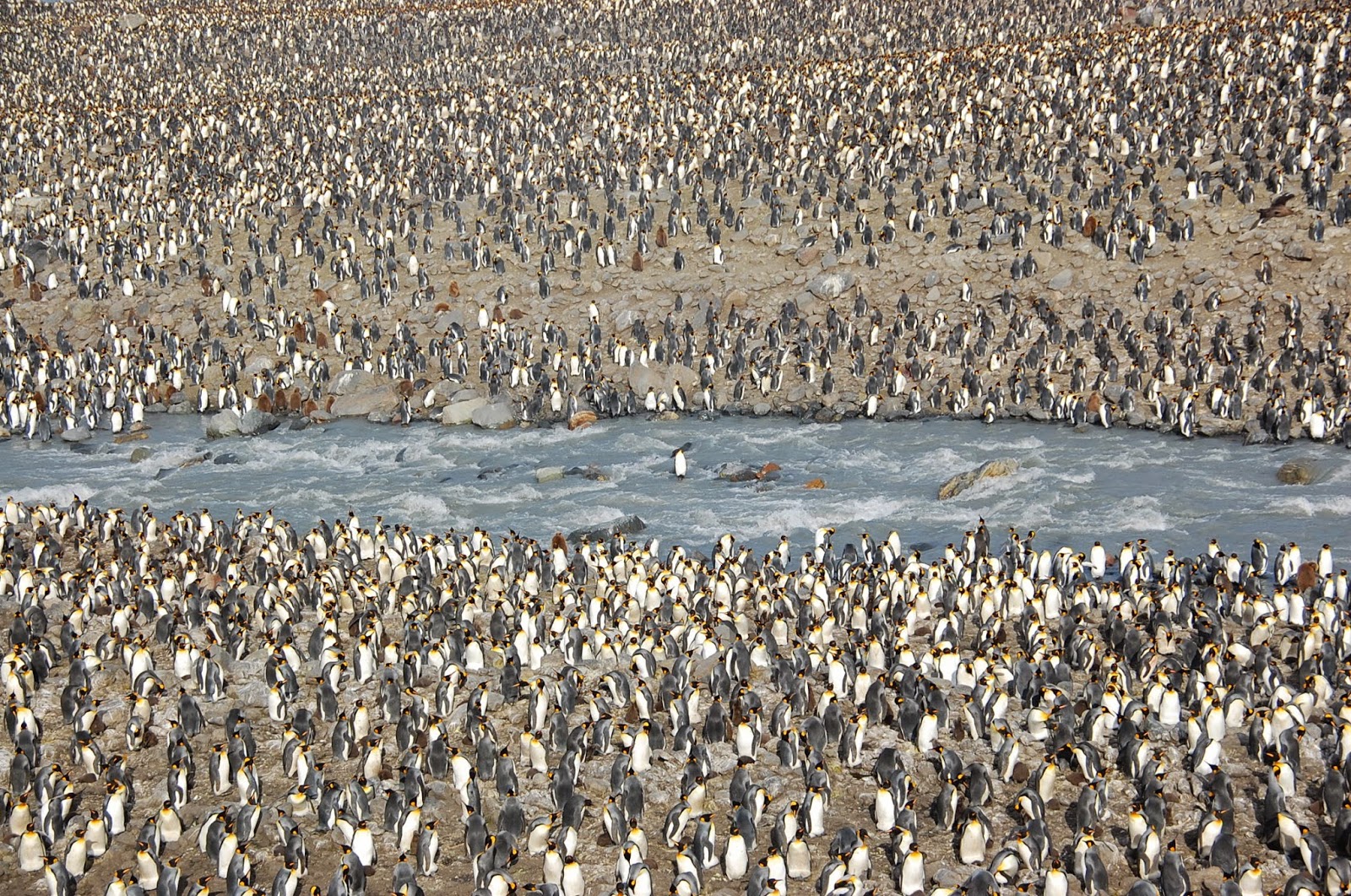 There are about 300,000 King penguins in this colony 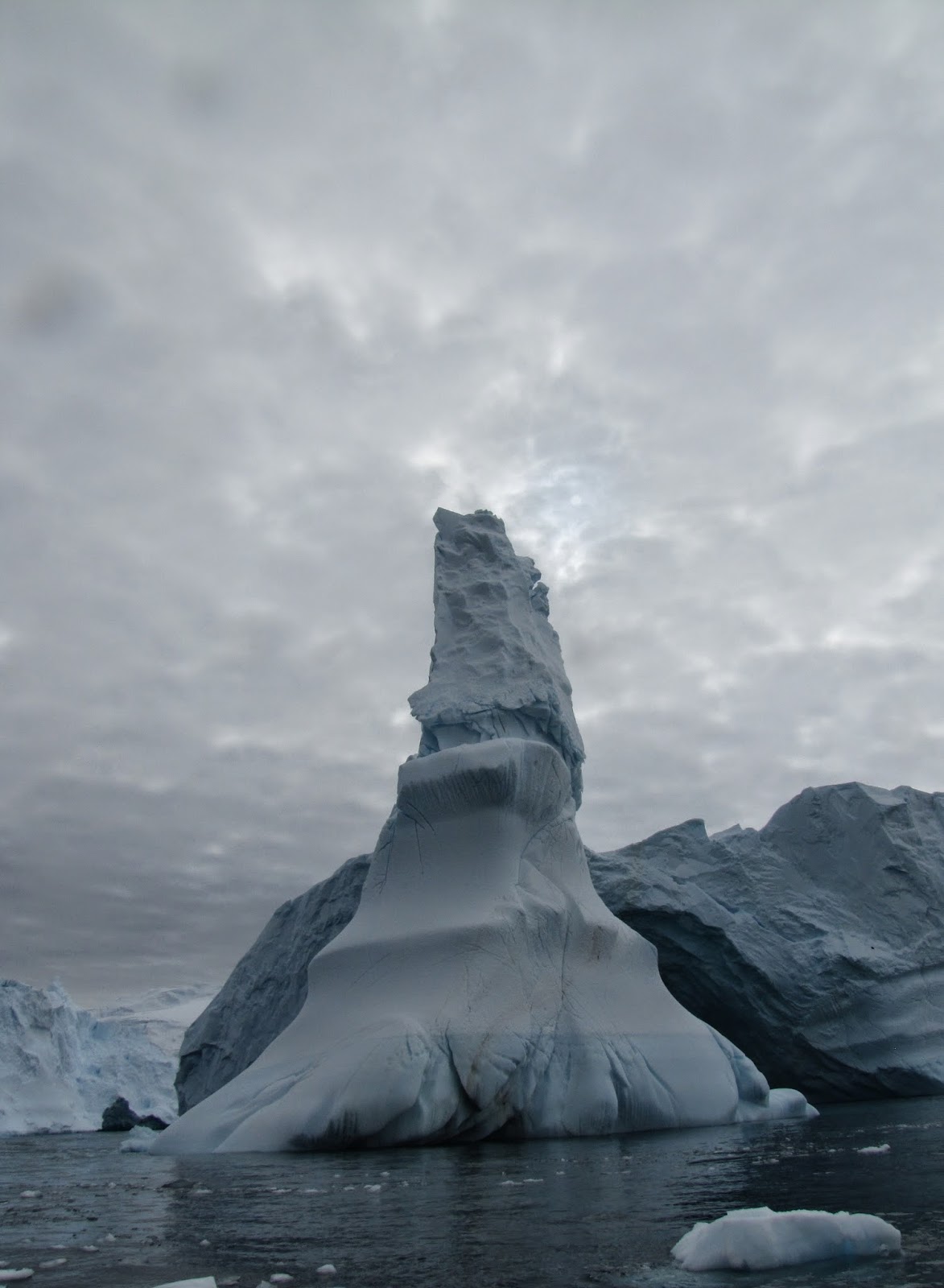 The drama of the ice 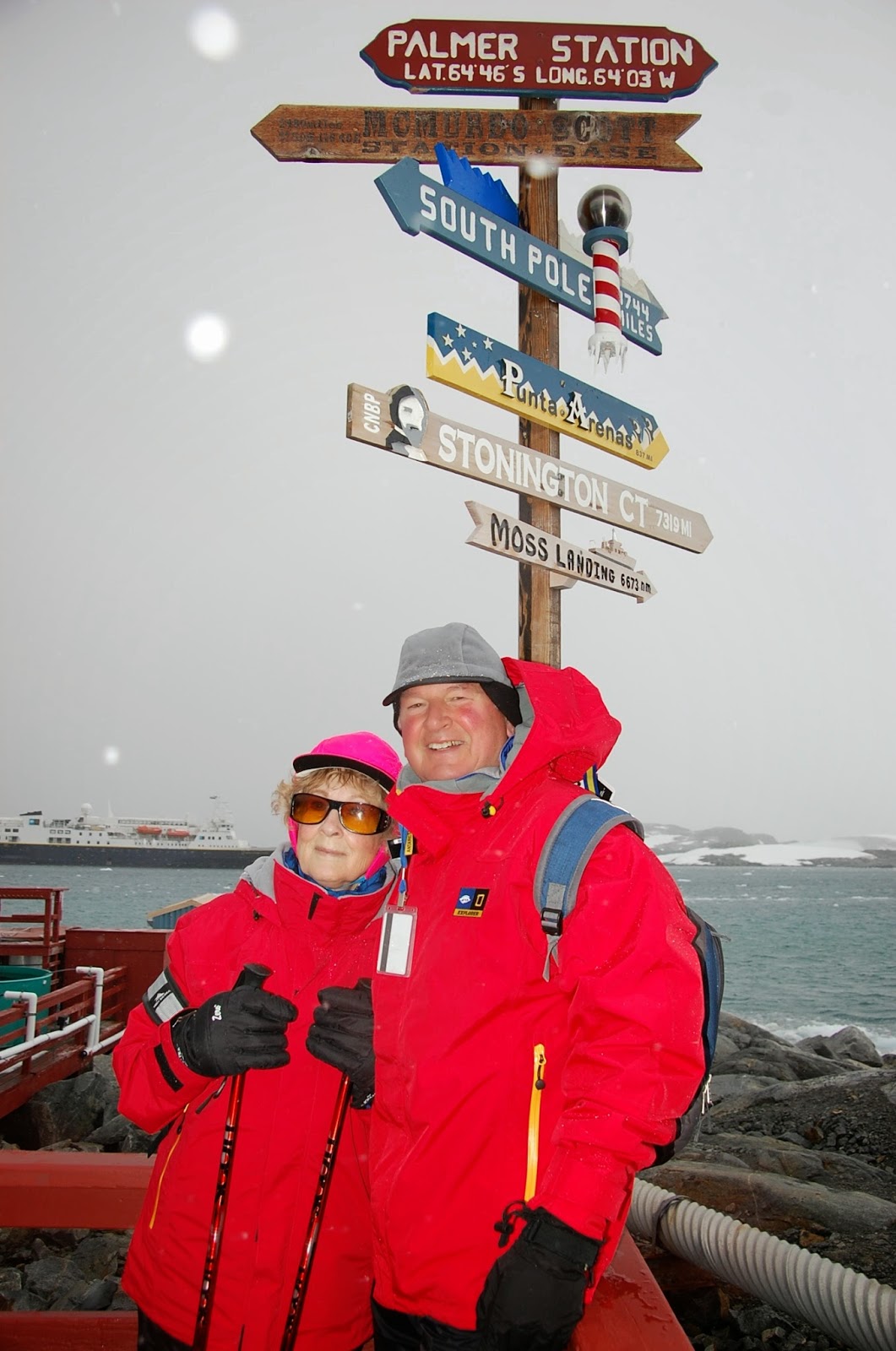 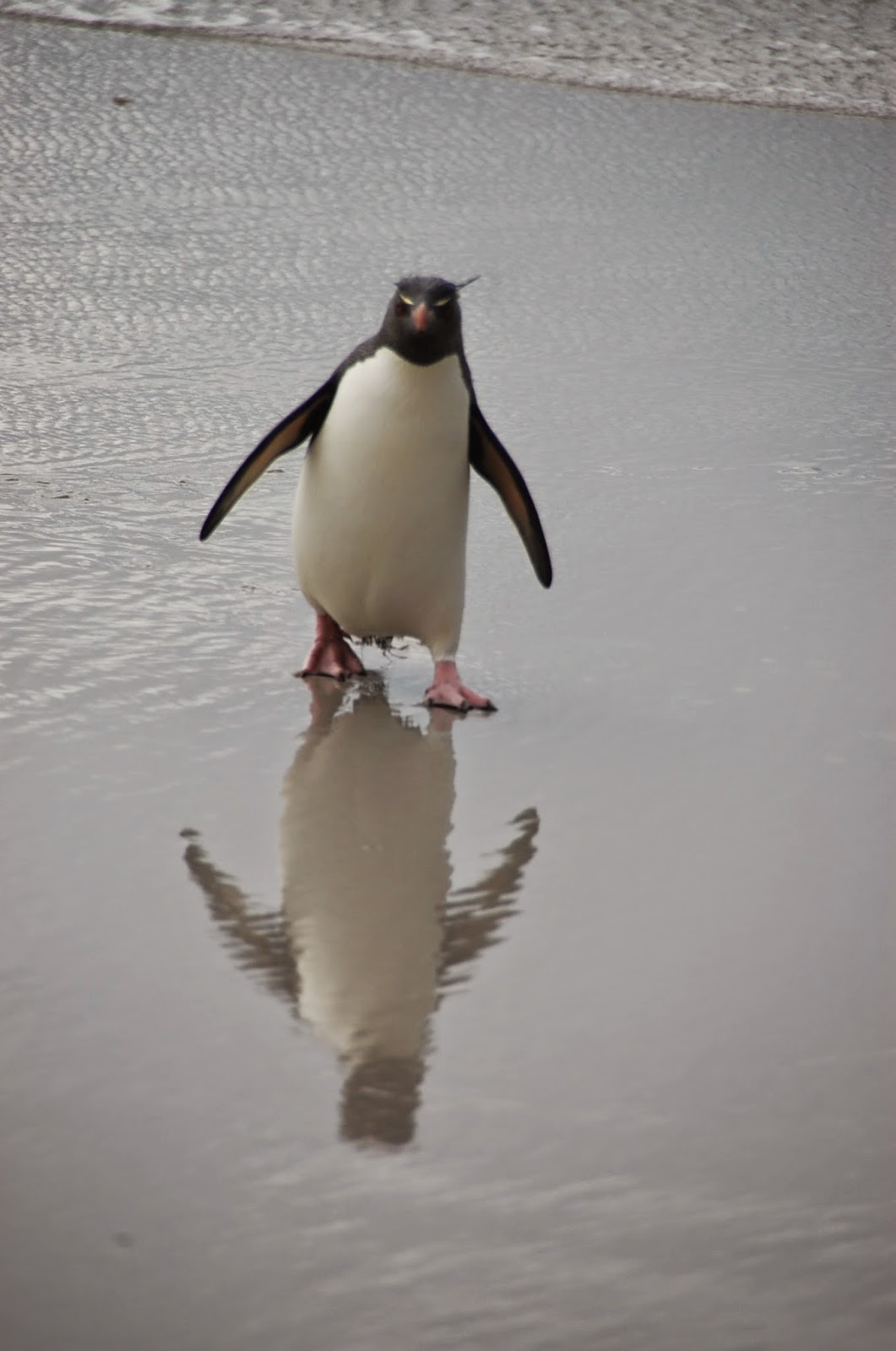 On the Falklands, a rock hopper penguin with attitude

Alice indulged my climate change passion and we attended the International Conference on Climate Change at Mandalay Bay in Las Vegas. The speakers and presentations were so good that Alice enjoyed it too, and we had a fun dinner with eldest son Bruce, his wife Lisa, granddaughter Leaha, and Lisa's children.

In July we again attended the Mendocino Writers Conference in Fort Bragg. It was enjoyable and productive for both of us, and contributed to the best news for us this year: Alice has completed the first hundred pages of her memoir "The Lady with Balls", which was what the Bay Area Italian garbagemen called her as she struggled to establish her (now) very successful business, Vulcan Incorporated. Alice treats writing like a very demanding job, and schedules her time accordingly. Her hard work and diligence shows in her work, and I would write more about her memoir but as Alice advises, "buy my book." I don't think you will have to wait until 2016 to do that.

I surprised and shocked myself by appearing in "Jekyll & Hyde, The Musical." Since I only sang briefly (and unplanned) in public once before, and my acting career ended on the Point Arena High School stage in 1960, this was a new and challenging experience that took a lot of time and work beginning with auditions in May and ending with six performances in November. I had a character part, the sex driven, pompous, arrogant Bishop of Basingstoke, and also doubled as a stablehand/brothel patron. As Bishop, I was Hyde's first murder victim and closed the first act lying dead onstage. I then helped open the second act as the stablehand lamenting the Bishop's death, and then quickly four more as Hyde warmed up to extracting vengeance on hypocrites. It was a wonderful experience, made special by the very friendly and supporting cast and crew. I hope doing other shows is in my future.

We have several things planned for next year already. In February Alice will have a new left knee to match her right one (replaced two years ago) (NOTE: Alice did not have this operation and is doing fine so far). She will have time to be fully recovered when we set out in June for an Arctic adventure - Norway, Greenland, and Iceland - on the same ship and in the cabin next to the one we had for Antarctica. Then on August 24, 2015 (Monday) we will have a Point Arena High School reunion. I promised to do it at our 2010 reunion, and it will happen (I hope).

Then we will join Alice's Reseda High School reunion group in October which will include a Mediterranean cruise beginning in Istanbul and ending in Rome.

As time permits we will also be attentive to our wonderful little dog Radar, working to improve his training and manners, which sometimes have slipped. 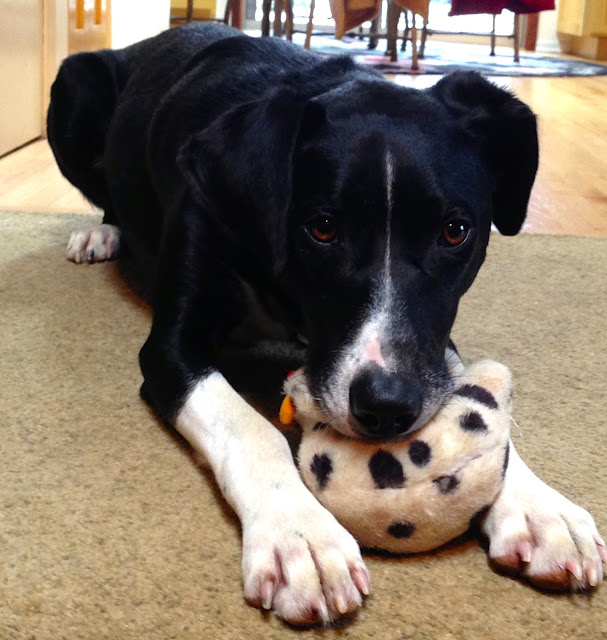 Alice and I wish everyone a Merry Christmas, a Happy Chanukah, and the best of New Years.