Income Inequality is Caused by the 99%


It is an inconvenient truth that income inequality is not caused by the 1%, but by the growing segment of society which lacks marketable skills and education. According to the San Francisco Chronicle, 40% of babies are born to single moms and each year half a million teens have children. Are Republicans the only ones who think this is a problem?
A study in Sweden found that single-parent children were twice as likely to have serious health problems, addictions, mental illnesses, and to commit suicide. This was not a right-wing hate study. Of course, other studies have found the same problems here which are contributing to a rapidly growing underclass that requires ever-increasing support services such as day care, Medicaid, housing assistance, and remedial education, to name just a few chronic and increasing problem areas. Will these problems go away if we avoid looking at a primary root cause? That’s what we’ve been doing, and it’s only getting worse.
Unemployment is bad at 8.6% (12% in California), and only looks like it is getting better because of seasonal hiring. However, good jobs go unfilled because Americans don’t have the education, skills, or required willingness to work. Many high-tech, high-paying jobs go begging unless businesses can hire foreign workers. In Wyoming (3.5% unemployment) over 16,000 high-paying energy jobs go unfilled because Americans are unwilling to relocate and work hard. Fifty years ago in Point Arena many of us worked at jobs that only illegal immigrants will take now, which depresses wages for unskilled and undereducated Americans, including college graduates.
The cartoon “Zits” summed it up nicely: Jeremy wants to major in music theory to “totally justify playing in a band while racking up $100,000 in student loans and graduating with minimal marketable skills.” Unfortunately, he’s not alone.
Posted by Major Combs at 12:04 AM No comments:

Email ThisBlogThis!Share to TwitterShare to FacebookShare to Pinterest
Labels: Economy 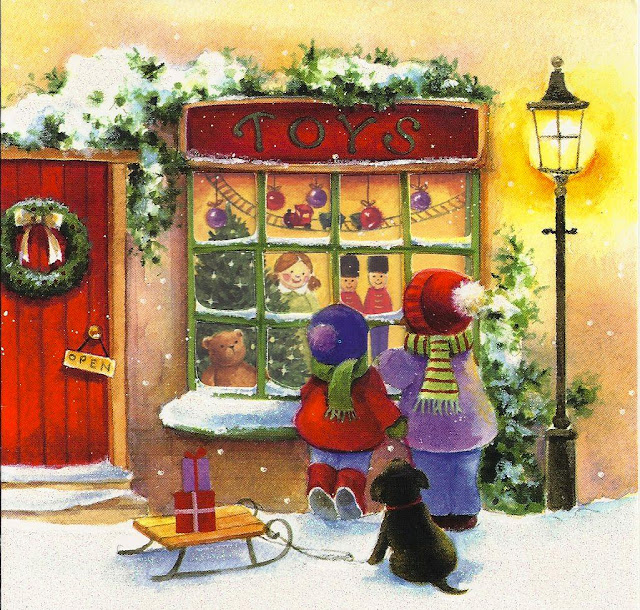 Writing our annual Christmas letter is a challenge, but physically getting them all folded, stuffed, addressed, and stamped should be an Olympic event. I just mailed out the last of 360 cards. The easy part is recording our travels, which were compressed into the last half of the year so we could fulfill our “presidential” obligations in the first half – Alice in her Book Club, and me in Lions. We finished our terms, then headed to the East Coast in late June for almost a month. We saw three Broadway plays: War Horse (a moving World War I drama with life-size and lifelike horse puppets, now a movie), Priscilla Queen of the Desert (funny and entertaining gay musical), and Book of Mormon. Great reviews, lousy musical – Alice says she liked it, which I guess shows you don’t need memorable songs and dances anymore to have a hit on Broadway if you do it in the infantile, raunchy South Park style. There is nothing brave or daring about ridiculing a small, peaceful religion like the Mormons. I would have been impressed if South Park did The Book of Islam, and showed Mohammad at his mythologically inspired best.

We did the Fourth of July in Bristol, Rhode Island, and toured Connecticut, and especially enjoyed the Mark Twain Museum. Hartford was a revelation; I never knew how Hartford had been such an important city in the Industrial Revolution in America.

Next we went to exotic Bakersfield for a Combs Cousins Reunion. I only know a few of my almost fifty first cousins – and innumerable second cousins – but it brought back memories of how Pop used to keep in touch with everyone.

We spent all of October in southeast Asia – The Philippines, Thailand, Laos, Vietnam, and Cambodia. Although we were there during the big floods, we had a great trip. In retrospect we would liked to have spent more time sightseeing in Vietnam. The Vietnamese are amazingly energetic and capitalistic – our kind of people. 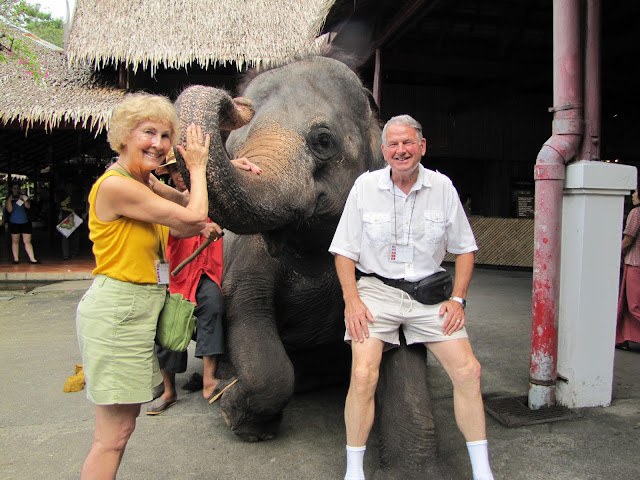 Laos
In 2013 we’ll be going to Panama and Costa Rica for certain, and hopefully to Colorado for Alice’s aunt’s 100th birthday celebration.

While we’re home here on the Pacific coast among the redwoods, our typical day begins leisurely – no alarm clock. I feed Buddy and brush his teeth, then run a few miles. Alice has breakfast, listens to talkradio or recorded Great Courses lectures, reads the newspapers, then hopes  for time to read books and to write her own. Lately she’s had to put in quite a bit of time on her business, Vulcan Incorporated (manufacturing and distributing industrial baling wire), but still makes sure to swim in her pool, or bicycle in the hills and down to the cliff above the ocean. Then we share a two-mile walk to the beach with Buddy, and just before going to bed we all take another mile walk so Buddy can do his nighttime piddles and poo. Buddy is 14 1/2 now, and all this exercise is probably what keeps him going. 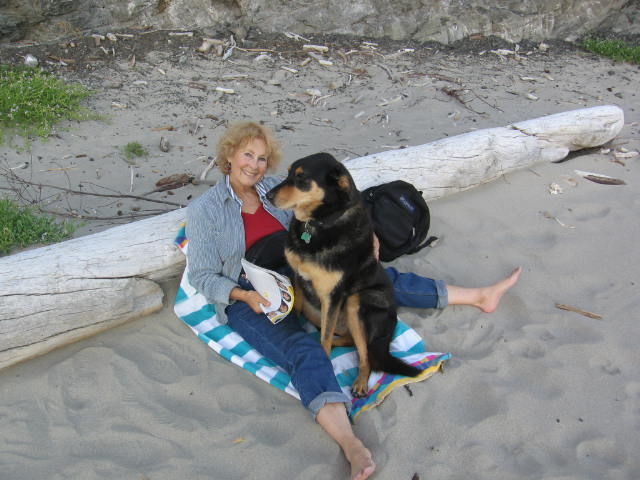 Alice and Buddy on Cook's Beach

In between exercise periods, we do our club activities, work at the computers – Alice on spreadsheets for Vulcan, planning our trips, emailing friends and family, writing her autobiography – when Alice read a bit to her eldest daughter and three of her grandchildren, they wouldn’t let her stop - and me researching natural climate change for my anti-Al Gore book – we keep very busy for retirees.

We wish you a safe, sane, happy, and prosperous New Year!

Mainstream Media is Hateful to Occupy


Criticizing Occupy activists is considered hateful, judging from responses to recent criticisms of Occupy in our local weekly newspaper, The Independent Coast Observer. Now it looks like the left-leaning Press Democrat should also be tagged “hateful” because of their November 28 editorial, “More muddled messages from Occupy folks”, which noted that the attempt to disrupt “Black Friday” shopping damaged Santa Rosa Occupy’s credibility and focus.
Occupy Wall Street’s national shopping boycott failed spectacularly, as Black Friday sales were up a record 7%, showing OWS has no clout as a national movement.
The ultra-left San Francisco Chronicle was “hateful” two weeks ago when in an editorial “Oakland says ‘enough’”, the Chronicle opined: “Oakland leaders finally acted decisively to remove a sprawling and unruly camp from the city's central downtown plaza. It was the right move, one that San Francisco should consider in responding to a similar tent city that's taken over an Embarcadero park.”
In another “hateful” editorial, the Chronicle concluded: “The Occupy movement is no longer  associated with protests over income inequality or Wall Street misconduct. Now it's about squalor and public safety, thanks largely to its nonexistent leadership and disorganization.”
What does OWS want? Income redistribution no doubt; having government take the rightful property of one group and give it to another, also known as theft. “When you take from Peter and give to Paul, you can count on Paul’s support.”
The rest of the OWS message is the usual Liberal hodgepodge of special interest issues, made particularly incoherent by its lack of leadership and direction. As OWS camps become full-time homeless camps and OWS activists flee their squalor – and Winter rain and freezing – the backlash by the media, municipalities, and weary voters will cause the Left to wish Occupy Wall Street never happened.
And as a coherent movement, it hasn’t.
Posted by Major Combs at 11:33 AM No comments: