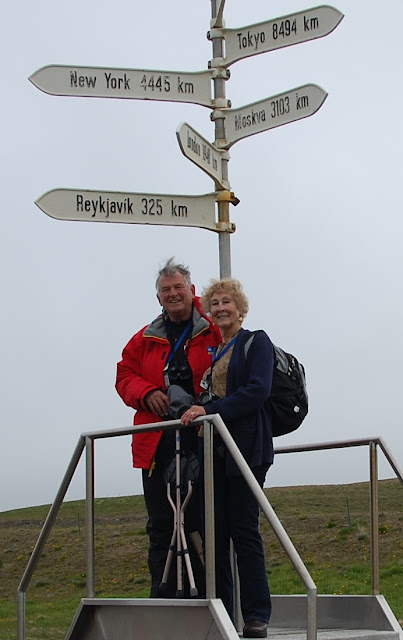 This year we celebrate the travels that were, and reminisce about the travels that weren’t. The highlight was our voyage into the Arctic Circle in June and July. After Antarctica in 2014, the Arctic wouldn’t wait. We began with a week in an Oslo apartment on the bay, then flew to Longyearbyen on Svalbard in the Arctic Circle to board the National Geographic Explorer. Our ship was the same as our Antarctic trip, but we were in cabin 202 instead of 204. Many of the staff and crew were also on the Antarctic trip, and they were a pleasure to journey with again.

As on the Antarctic trip, we were inundated by human-caused climate change propaganda, and I pushed back hard with facts about millions of years of natural climate change, of much greater warming and higher sea levels. I put together a Power Point presentation and got scheduled with the staff to present it, but then I was cancelled and rescheduled to a time in competition with other activities.

We only saw a couple of polar bears. We expected to see more, but the East Greenland sea ice was much thicker than Lindblad/National Geographic anticipated (global warming was on holiday), so we eventually were refunded $4,000 for the disappointment. I had studied polar bear survival and found that it was lowest when there was thick spring sea ice, and not when spring sea ice was thin, because polar bears need to gorge on young seals during the spring and thick sea ice is bad for seal survival. Polar bears get over 2/3 of their annual nutrition in 1/3 of the year, and the rest of the time get by on scavenging, goose eggs, small animals, and whatever else they find. 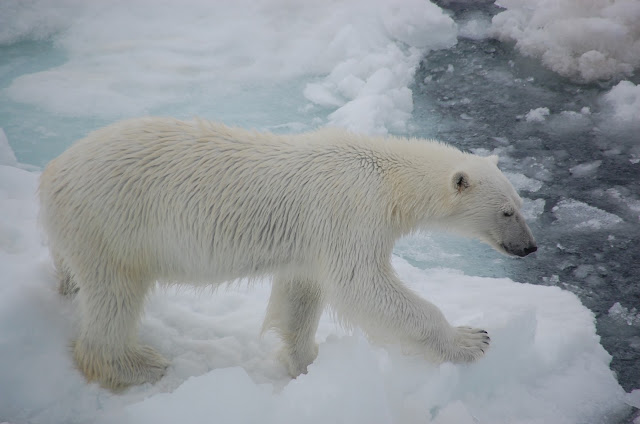 Attracted to the ship by our breakfast bacon odor 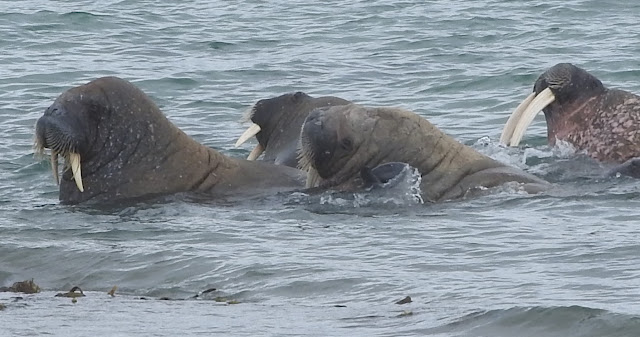 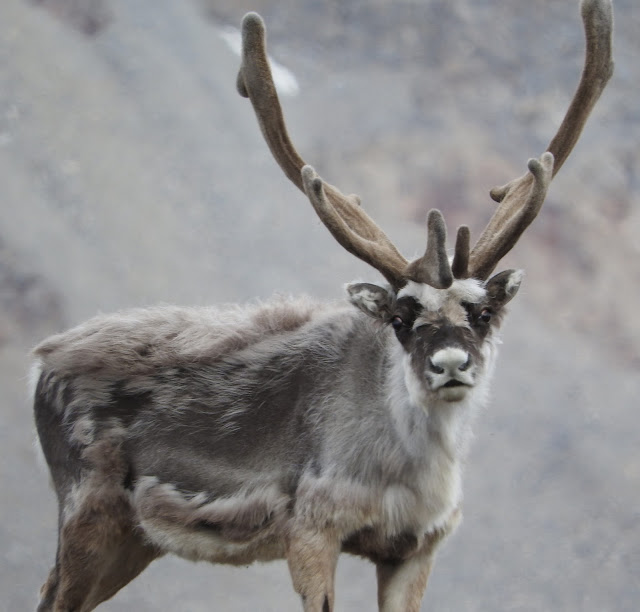 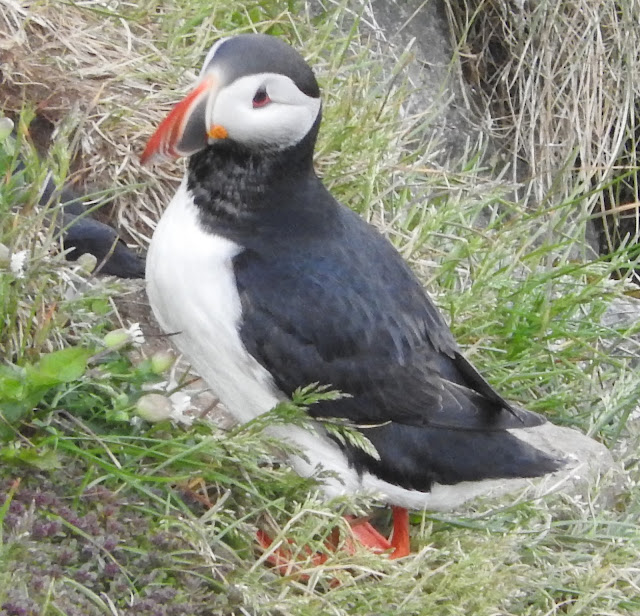 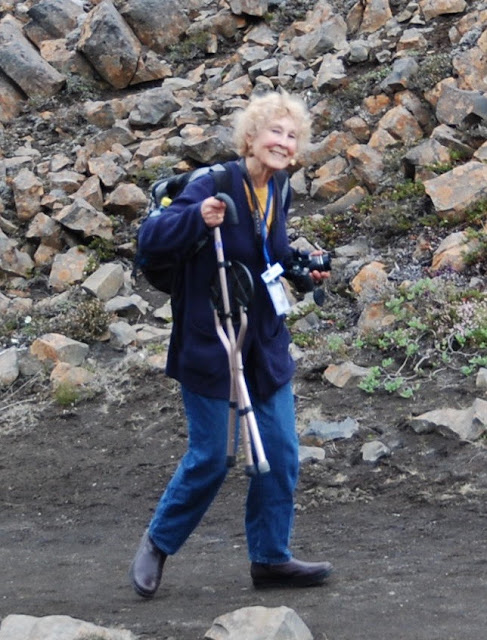 Alice is making very good progress on her memoir, The Lady with Balls, and has finished 200 of a planned 320 pages. She works on her writing tirelessly, and never hits a “writer’s block.” She decided when she began writing her memoir that it was her job, and she does not allow herself much time off. I enjoy getting the first pass at editing it, and her story is so interesting that I get too involved and need to make a second reading to catch what I missed the first time through. After I take my turn, Alice works with other editors to ensure that clarity and good pacing.

Just over a year ago we (90% Alice) bought a nearby house for rental income. Our first tenants were a young couple with a child; within three months they informed us that their bank account was frozen by the government and that they could not pay the rent and were moving out. We did a home inspection while they were moving out when they weren’t home and found an extensive system for growing pot in the downstairs workroom and garage which had not been set up yet. The young man was abandoned by his wife, and became very lethargic about completing moving out. We already had found a very good tenant ready to move in, and we despaired of getting the old tenant out, so we hired some local handymen to remove all his things and put them in our big metal barn, including the pot growing devices. We gave the young man a night in a Gualala motel, and when he told me that he had no money and would sell all his stuff to me for $300 cash, I paid him on the spot.

Is anyone in the market for pot growing paraphernalia?
I organized a Point Arena High reunion in August covering my class of 1960 and classes from the beginning of time (1950) to 1970, which was a lot of fun. My regret was that many of my closest friends from our school days had other commitments and couldn’t attend. I’m begging Alice to let me do another in two years instead of five so that I can concentrate on getting all of my close friends there. She thinks I’m crazy, but I really enjoy the planning and organizing, and then seeing everyone.

Just over two months ago we went to Van Nuys in southern California for Alice’s 55th Reseda (Tarzana) high school reunion, the first stop in a month-long trip/cruise that was to begin in Turkey, visit Israel, Malta, Sicily, and end with nine nights in Rome. As Alice and I were dancing very energetically at her reunion, I felt and heard a “pop” that I soon found was from my totally ruptured right Achilles tendon. We had to cancel the entire trip and I needed an operation to reattach my tendon. I hobbled around with a cast and crutches for six weeks, and now have an enormous walking boot. It isn’t bad, though. I can play ball with Radar every day at the beach now, and drive again.

Next year Cuba? Alice gets to choose. Then I’ll probably choose a whale-watching cruise to Baja for 2017.

Weather report: it’s a rainy day on the coast, with over four inches of rain since yesterday morning, and we haven’t even reached the expected El Nino storms due in January and February. Soon all the drought gloom and doom will be replaced by flood and mudslide gripes.

Everything old is new again, and at age 73 Alice and I have seen and heard a lot. And we just told you a lot of what we saw and heard this year.

Merry Christmas, Happy Chanukah, and the Best of New Years. 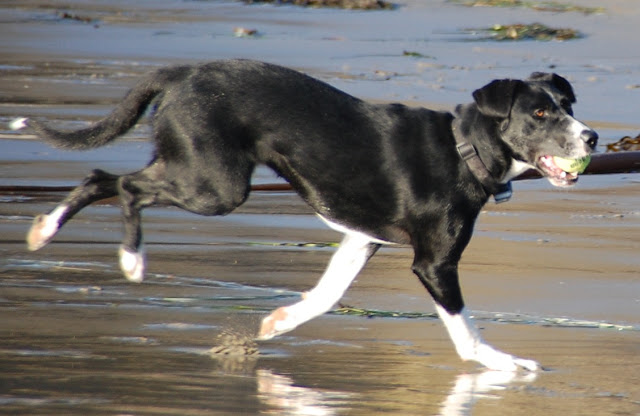 I haven’t written about dumb professional football coaches and players for awhile, not because of a shortage of stupidity, but because there is so much of it. As a 49er fan since 1954, I’ve seen a lot of the good, and more and more lately, the bad. The 49er owners and coaches were miserable in the 1970’s, then for the most part were great under Eddie DeBartolo and Bill Walsh. What was Eddie’s claim to smarts? He  hired Bill Walsh, then let him run the team. And what about Bill Walsh? The only really dumb thing he did was retire too soon.

But then Eddie used unbelievably poor judgment and had to step down as owner, and the bad decisions rained down. A good coach like Steve Mariucci was fired, and Jeff Garcia, who was a worthy successor to Montana and Young, was let go along with the receiver he made great, Terrell Owens. Now the Niners have dumped Jim Harbaugh, continuing their tradition of abhorrent front office management.

Harbaugh, of course, did his share of stupid things. In the Super Bowl against the Ravens, with one of the league’s best running backs, Frank Gore, and its best running quarterback, Colin Kaepernick, the 49ers threw the same incomplete pass three times from the Raven’s six yard line. Faced with similar circumstance in the NFC title game against the Seahawks the following year, Kaepernick threw the same pass, this time for an interception.

Which brings me to tonight’s Super Bowl, or as it should forever be known, the Stupid Bowl. With the ball on the Patriot’s one yard line, and with the NFL’s best short-yardage running back, Marshawn Lynch, and second-best running quarterback, Russell Wilson, the Seahawk brain trust had Wilson throw an interception.

The incredible irony of this is that if the situation was reversed, Tom Brady would have scored on a quarterback sneak.

The Patriots did dumb things too. Russell Wilson looked like a deer in the headlights frequently when he dropped back to pass, but I don’t think the Patriot defensive players ever saw a bull fight or Judo. Like a bull charging the matador’s cape, a Patriot defender would rush at high speed directly at Wilson, who easily sidestepped and then became very dangerous as a passer or a runner.

However, giving credit where credit is due, both offenses did a good job of clock management, unlike most of the 49er games this year. When the 49ers were not earning delay-of-game penalties, or wasting time outs avoiding having them called, they were running out of bounds when they should have stayed in and kept the clock running, or vice versa.

And for the league as a whole, there are all the stupid taunting and excessive celebration penalties that give away or take away first downs, or screw up field position. If I were a coach, I would give offenders “time outs” and fine them for wasting teammates’ efforts and hurting the team by undisciplined and selfish actions.

But after today I’m left asking: “What are they paying these guys for?”
Posted by Major Combs at 9:31 PM 1 comment: