A letter last week used theories to define climate change terms, but omitted supporting observations. It’s OK to say that something could cause something, but if it doesn’t a new theory is demanded. Theoretically, doubling atmospheric CO2 could raise global temperature 1.22°C, but while CO2 has climbed steadily for over sixty years, global temperature has not. In fact, the world added roughly 110 billion tons of carbon to the atmosphere between 2000 and 2010, about a quarter of all the CO2 put there by humanity since 1750, yet global temperature has been flat the last fifteen years.

When facts disagree with theory, alarmists want to change the facts. Science can't work that way.
Posted by Major Combs at 6:15 PM No comments:

A Star is Born!

It only took 70 years for me to make my singing debut. Fittingly, it was in the Point Arena Theater, where in the decade of the 1950s I watched over 1,000 movies, most of them forgettable B-grade Westerns. Most of you reading this have no idea what these Westerns were like, and they were so forgettable, all I can remember is that towards the end the brave settlers were just about to be overrun by the murderous red savages, when faintly, far away, a bugle could be heard announcing the eminent, just in the nick of time, arrival of the Cavalry. We all jumped, and whooped, and cheered in our seats, as the blood-thirsty redskins were bloodily vanquished.

Actually, in those days almost no blood spilling appeared on screen. It was like everyone died of internal injuries.

But as usual, I digress. However, let me continue a digression that may get me back on track. On the screen on that stage at that time there were often moments of movie magic we called musicals. As my buddies groaned while the singers broke into song, and the dancing commenced, my mind immersed me in the wonders that the composers, lyricists, choreographers, directors, singers, and dancers intended for me. I watched “Seven Brides for Seven Brothers” so intently as a twelve-year old in 1954 that by the end of the third showing (the best films were shown twice Saturday and once Sunday) I had almost all the lyrics committed to memory. Since Mom cleaned the theater, brother Ron and I got to watch all the films for free.

And here’s the track again. I easily developed a facility for remembering songs, and even today (in my mind) can recall and hear songs I haven’t heard in fifty years. So about two months ago Alice and I went to the Point Arena Theater for a live performance of Steve Martin’s play, “Picasso at the Lapin Agile”. All we knew about the play prior to arrival at the theater was that Steve Martin wrote it – that got our attention! – and that one of our favorite people, Blake More, had a part and had told us the week before that we would enjoy the show.

For Alice and I, the show had an unusual beginning that no one but us noticed: we arrived late, as usual, and as is usual for Point Arena plays, it began late, and for some strange reason the combination of our lateness and the play’s late start got us front row seats. Two of the performers, Bryn Harris and her father, Wayne, were “warming up” the crowd: Bryn was singing French songs to Wayne’s accompaniment on the harmonica. Pretending to be an impromptu street performer, Bryn passed a hat and a few dollars were thrown in. “Now,” said Bryn, “let’s do a sing-along in English.” Turning to her father, she said, “Play the ‘lonely’ song,” and Wayne began “Are you lonesome tonight?” I started singing along, and Bryn overheard me and motioned me to stand with her and sing.

When you’re seventy, you have already done all the “first times” in your life, but I had never spontaneously sung before an audience. Years ago I had participated in karaoke arranged by brother Ron and his wife Kathy at my step-mother Ruth’s 80th Birthday party in Fortuna. I sang Hank Williams’ “On the bayou” and encored “If you’ve got the money, honey, I’ve got the time.” Now I found myself singing from memory with this young lady, Bryn, and soon realized that Bryn had stopped singing and moved into the audience, leaving me alone to carry on, just as the song reached its emotional climax:

“Do the chairs in your parlor seem empty and bare?
Do you gaze at your doorstep and picture me there?
Is your heart filled with pain, shall I come back again?
Tell me dear, are you lonesome tonight?” 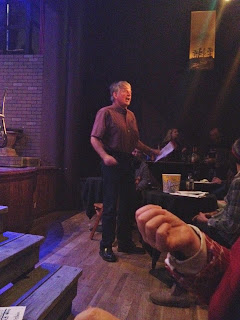 With an unwarranted confidence, I sang louder and more dramatically, reminding myself to keep my mouth open, don’t rush, and don’t forget to breath. The applause as I finished surprised me, and I grinned and waved briefly, then took my seat. After just a moment, Bryn came over, pulled a dollar from the collection hat, said “You earned it,” and put it in my shirt pocket.

Over the next week I met friends who had been at the performance, and several said that they didn’t know I could sing like that. “That makes two of us,” I replied.

(Photo courtesy of Scott Ignacio)
Posted by Major Combs at 1:06 PM No comments: