A science quiz. Science’s answer to each of the following questions concerning climate in the past 10,000 years is “yes.”

Has Earth been significantly warmer? 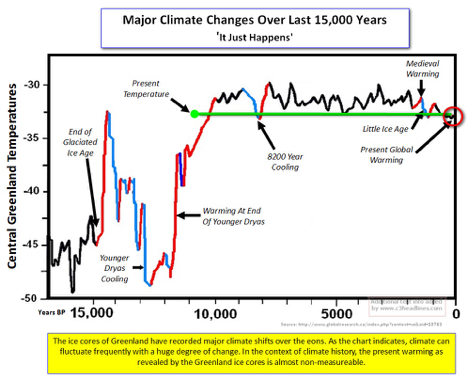 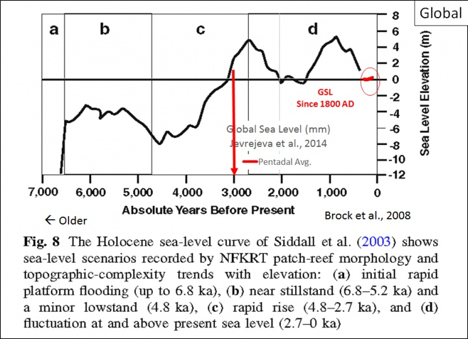 This is a link to many studies that show that during the past 10,000 years glaciers were predominantly smaller than they are now. 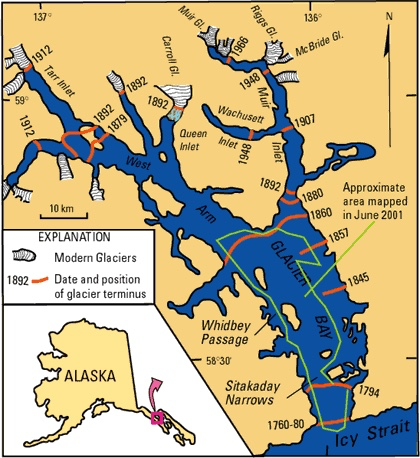 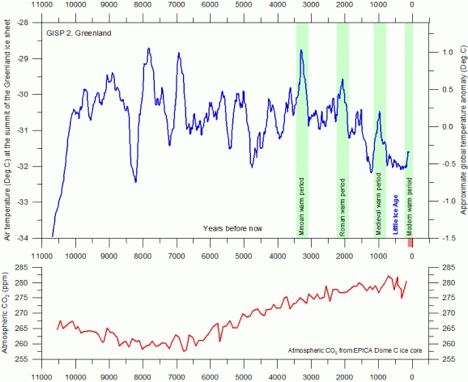 Were wildfires more frequent and burn far more acreage before 1900 than now?

Fire ecologists say that far more land burned each year during the 1800s and earlier, than in recent years. In the preindustrial era, from 1500 to 1800, an average of 145 million acres burned every year nationwide — about 10 times more than the nation’s recent annual burns. In the West, it was estimated that 18 to 25 million acres burned each year, as recently as the 1800s. 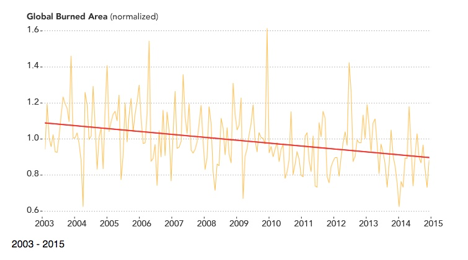 Were there megadroughts that lasted over 200 years in North America 1,000 years ago?

This Bjorn Lomborg article succinctly describes the California wildfire problem and why, even if California, even if all the United States were suddenly carbon neutral, the wildfire problem would just get worse. Logic and critical thinking demands that the forests be managed regardless of climate. Just 200 years ago a lot more of California (and the US) burned annually when average temperature was over a degree lower. 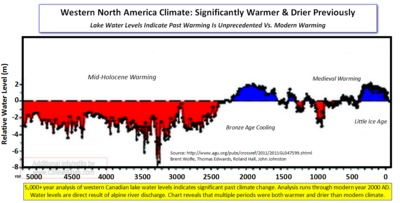 Has the Greenland icecap grown?

These diagrams determined from ice core and satellite studies show it has. 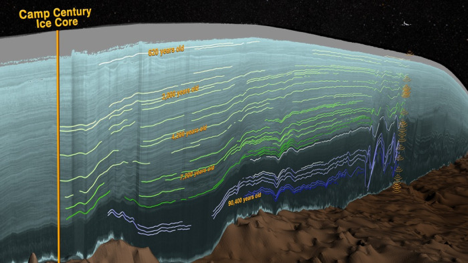 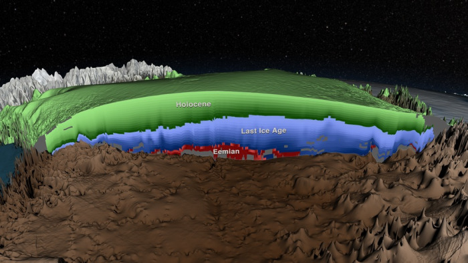 “Ice core analysis does reveal that increasing atmospheric carbon dioxide levels did lag behind increasing temperatures at the end recent ice ages. Although there is a certain degree of uncertainty regarding the lag time, it is generally accepted that at the end of an ice age, temperatures began to increase, and then carbon dioxide levels began to increase.”

Of note, during all the times this has happened there has never been a single case of unstoppable global warming. In fact, at each temperature and CO2 maximum, cooling began and the next 100,000-year glacial period was launched. 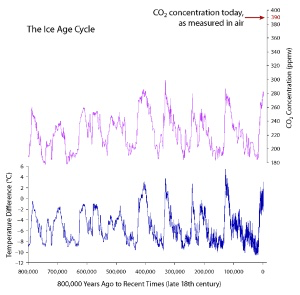 This chart below shows that for the past 600 million years, CO2 at times was over 15 times the current level and that cooling oceans absorbed CO2 as temperature fell. It also shows that for most of the past 100 million years, temperature was 10C (18F) higher than now, even as vast numbers of photosynthesizing organisms removed CO2 from the atmosphere. 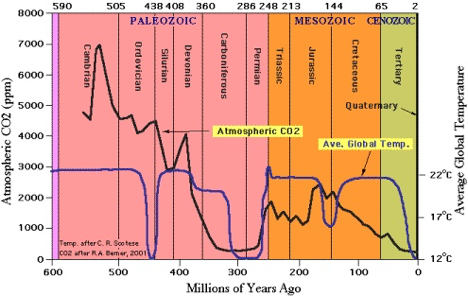 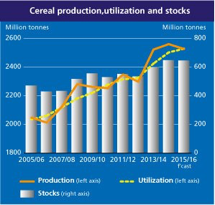 This article has links to studies showing global record harvests.

Do wind and solar combined only produce three percent of total energy consumption?

Was half of current warming before the rapid increase in CO2 after 1950? 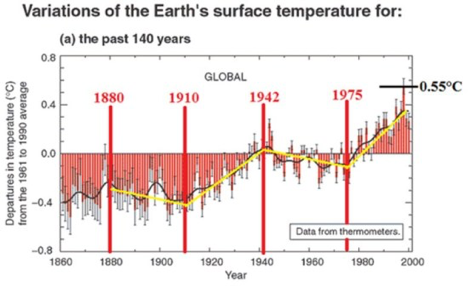 The NOAA chart below shows no temperature trend. The temperature spikes are in El Niño years. 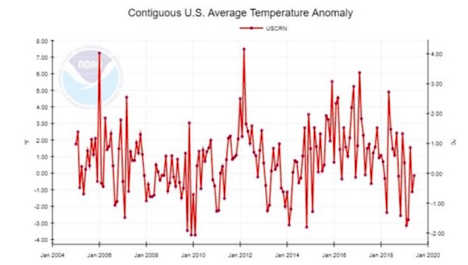 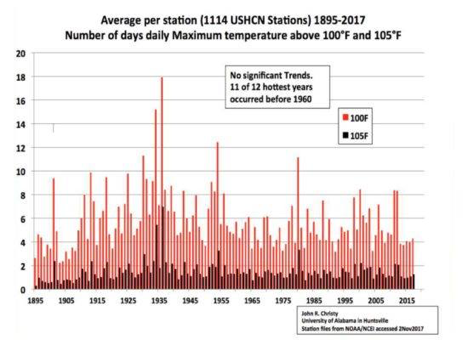 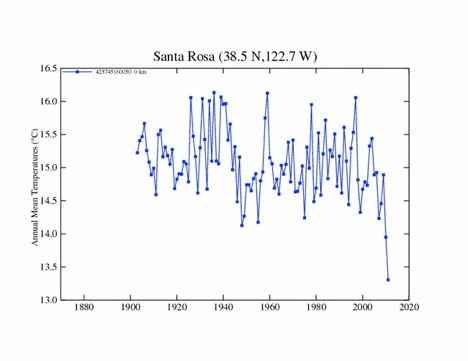 The answer to the following questions is “no.”

During the Eemian interglacial period 125,000 years ago, when sea levels were up to 30 feet higher and global temperature eight degrees Fahrenheit warmer, was there runaway warming?

Obviously not, or we wouldn’t have had a 100,000-year glacial period following it.

Is carbon dioxide the most significant greenhouse gas (hint: water vapor at 96-99% is)?

Both water vapor at 0.4% of the atmosphere and CO2 at 0.04% are trace gases. Temperature changes resulting from orbital variations periodically (every 100,000 years) cause temperature to increase with resulting increases in both water vapor and CO2 levels in the atmosphere. The pattern of the past million years show that the Sun – via its position relative to the Earth – drives climate change and that CO2 and water vapor changes are a result, not a cause, of the climate change. 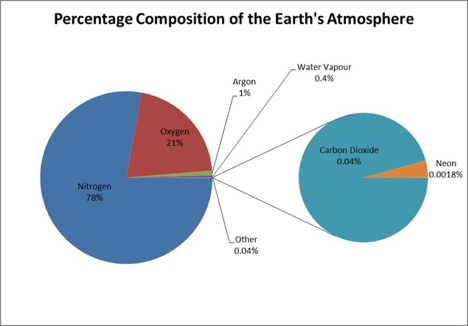 Is a colder Earth more productive?

It wasn’t for the 100,000-year period glacial period that lasted from the end of the Eemian interglacial until the current interglacial began 11,700 years ago. At one point atmospheric CO2 was at 180ppm, barely above the level of plant starvation of 150ppm.

Are storms more frequent and powerful?

From 2006 through 2014 no Category 3 or stronger hurricane struck the continental United States, the longest such period since the Civil War. 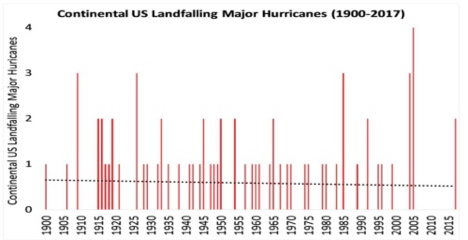 The science behind each of these questions is robust and irrefutable. Climate change is natural and unstoppable. 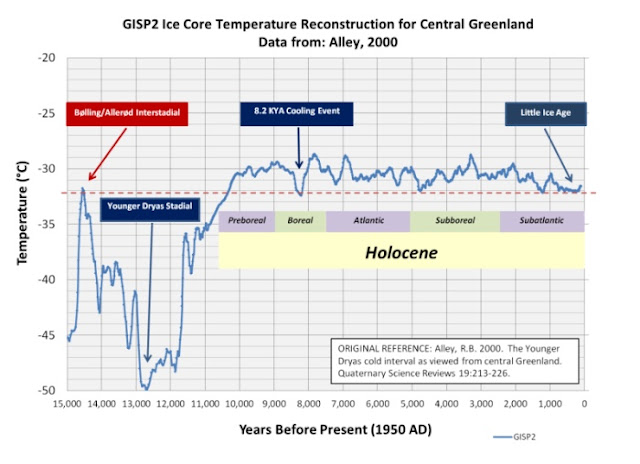 Franz Kafka described individuals who were powerless to understand or control what was happening to them. I have the feeling that Kafka is writing today’s headlines about climate change. Authorities accuse sceptics of rejecting science while displaying their own profound science ignorance and proudly parade it before an equally ignorant public. Apocalyptic predictions are breathlessly proclaimed, then studiously ignored when they don’t come to pass.

A case in point is our reaction to recent wildfires. The prescription for solving the problem begins with stopping climate change by reducing California CO2 emissions. Overlooked is that if California totally eliminated CO2 emissions and returned to Horse & Buggy days, over five billion people in the developing world would still be rapidly accelerating their CO2 emissions as they pursue our prosperity. China and India would still be bringing an average of one new coal-burning power plant on line each week for years to come, and China would be assisting African nations to solve their energy poverty. 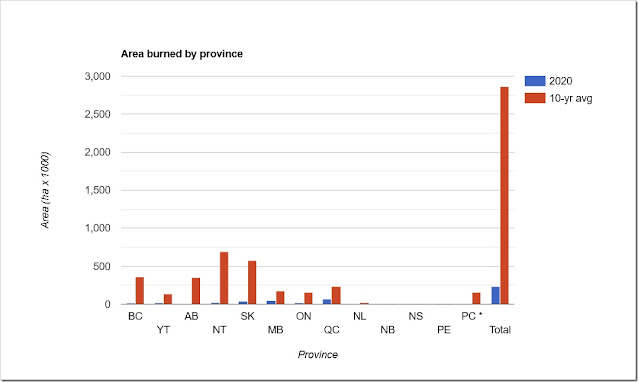 Our current natural climate change is totally unremarkable in the context of the eight major cycles of the past million years. Exhaustive studies of Earth’s orbital parameters (Milankovitch cycles) during that period determined that they were responsible for alternating 100,000-year glacial periods with short 15,000-year warm periods. It will shock many to learn that Earth’s climate changes have been dramatic; only a bit over 20,000 years ago, all of what is now Canada was covered with ice sheets over a mile thick; Earth’s surface is still rebounding in many places after the ice sheets melted and our current warm period began only 11,700 years ago.

The previous warm period, the Eemian, peaked about 125,000 years ago with temperatures 4 to 7 degrees Fahrenheit warmer and sea level 20 to 30 feet higher than present. This sustained warmth enabled the hippopotamus to range as far north as the rivers Rhine and Thames. The atmospheric level of CO2 reached 280 parts per million (ppm), then fell to 180 ppm (below 150 ppm, plant-life dies on a massive scale) as temperatures dropped and the next glacial period began 115,000 years ago. Both the increased and decreased levels of CO2 followed, not preceded, temperature changes, since cooling water absorbs CO2 and warming expels it.

There have been five warm periods in the past 10,000 years and the first, the Holocene Climatic Optimum (9,000 to 5,000 years ago), was the warmest. Fortunately for skeptics, evidence of its higher temperatures than present left features that are abundant and easily observed. The northern latitudes of Europe, Asia, Alaska, and Canada display tree stumps hundreds of kilometers north of where trees can now grow. Glaciologists have determined that glaciers are now larger than they were then. Studies of features such as coral mounds up to six feet above present sea level are irrefutable evidence of prior warmth because coral cannot grow above water.

Unlike assurances by Al Gore and his “apocaholics,” current climate change is far from unprecedented. Besides the first and warmest period of the past 10,000 years, there have been four other warm periods including the present. After the Optimum came the Minoan, Roman, Medieval, and Modern, each of which was less warm than its predecessor. For roughly the past 8,000 years, Earth has experienced a cooling trend, and studies such as Greenland ice core samples show that the past 1,000 years are the coldest in 10,000 years. 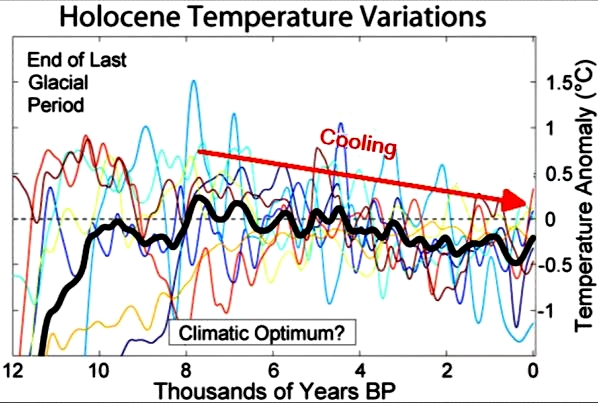 Current discussions of climate change lack scientific and historical perspectives. It is irrefutable that past greater warming did not result in runaway temperature increases, even millions of years ago when CO2 levels were ten to twenty times higher than now. Natural catastrophes such as droughts, powerful storms, and wildfires have all been intensively studied and found to have been much worse during earlier periods.

In California, 1910 to 1940 was much drier than any 30-year period since. However, the past 100 years have been much wetter than the previous 7,000 years, which featured several 200-year mega-droughts.

Every one of the items I’ve mentioned is easily accessible and clearly demonstrates that our present climate change is a part of natural cycles that have persisted for the past two million years. For over twenty years I have made a debate challenge that hasn’t been accepted: “Proposition: Climate change is natural and always has been.” I’ll take the affirmative.

I welcome any and all who wish to debate the negative.

Posted by Major Combs at 9:55 PM No comments: