Procrastination is the thief of time, but better late than never.

Since the United States is swimming in the Sea of Rationalizations, I thought that it's about time to brush off a few cliches and jump right in to test the water.

First, our life is a bowl of cherries. We empathize and realize that's not the case for everyone; never has been, never will be. Still, the world is in better shape than it has ever been - less warfare and killing, better health and nutrition, and vast reduction in poverty. It's still not perfect; never has been, never will be. But we're grateful and happy for its progress. The glass is more than half full!

2016 was a busy year for these two retirees. The biggest, almost all-consuming activity, has been Alice's soon-to-be finished (ready for an editor and publisher) memoir, The Lady with Balls, her account of founding and growing a business in the then male-dominated garbage recycling industry. It's suspenseful, poignant, thought provoking, sometimes sexy, often humorous, and thoroughly readable. Alice is already contemplating which of today's screen stars could best portray her on the big screen, and later in the sit-com (situation comedy for those of us who don't watch TV). Alice has made writing The Lady with Balls a full-time job for the past two years, and her hard work will be rewarded, as sure as God made little green apples, and it rains in Indianapolis in the summertime.

The past year hasn't been all hard work. Alice treated her daughters, their husbands, and five grandchildren (and me) to an all-expenses-paid ten-day family vacation in Cuba. 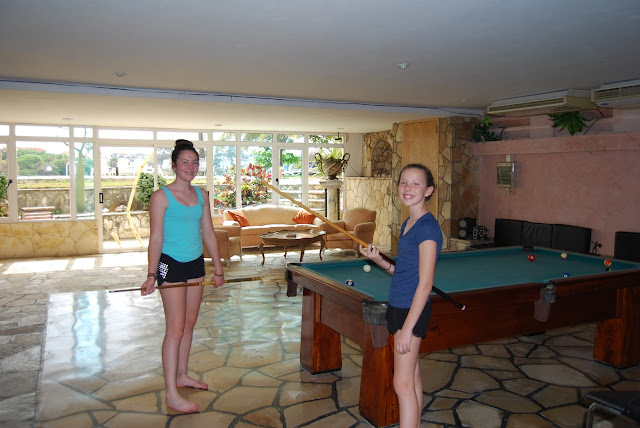 Savannah and Josie live it up in our Havana house (thanks to Airbnb.com)
(Click on each photo for an enlarged view) 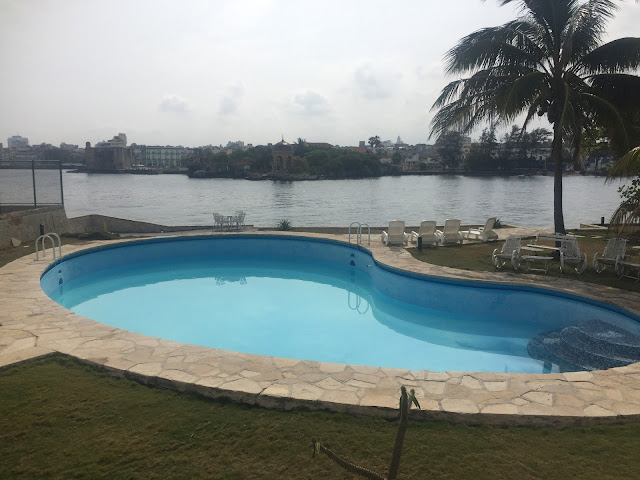 At our Havana house 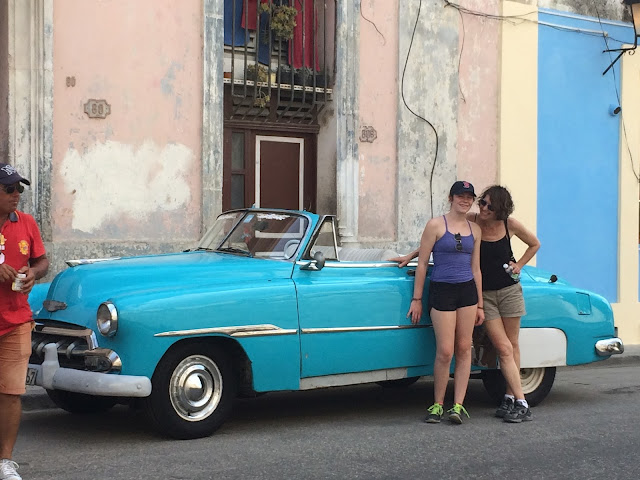 Jeanette and Savannah get around in style! 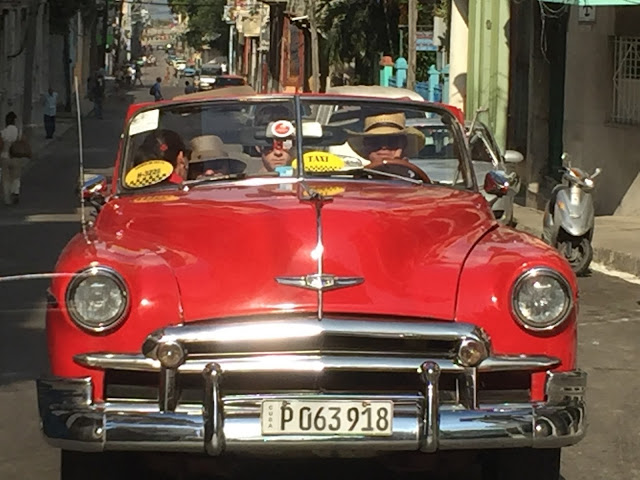 So do the rest of us 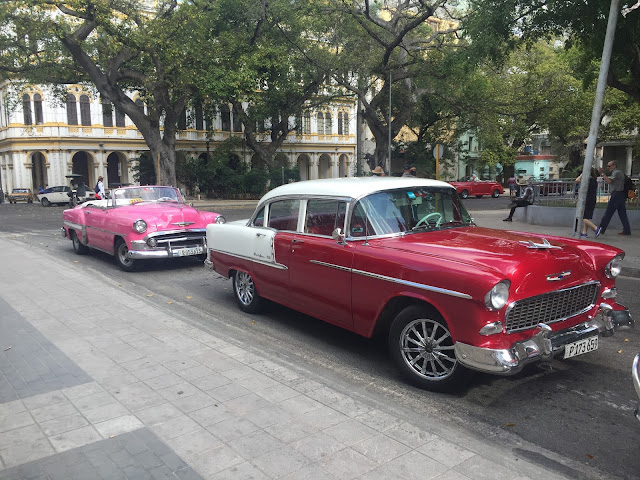 A real walk down memory lane 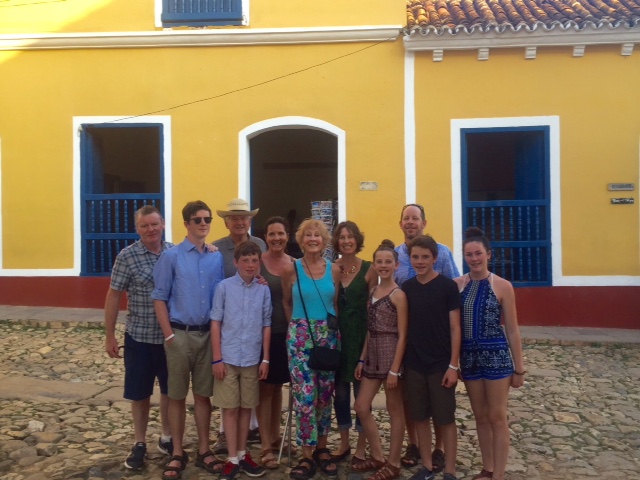 All eleven of us arrived at the Havana airport on the 1st of April. In what is perhaps a first for such a large group, we didn't use a tour company, and did all the planning and making reservations ourselves (actually, Alice's daughters and their families did almost all of the work, and Alice funded their efforts). 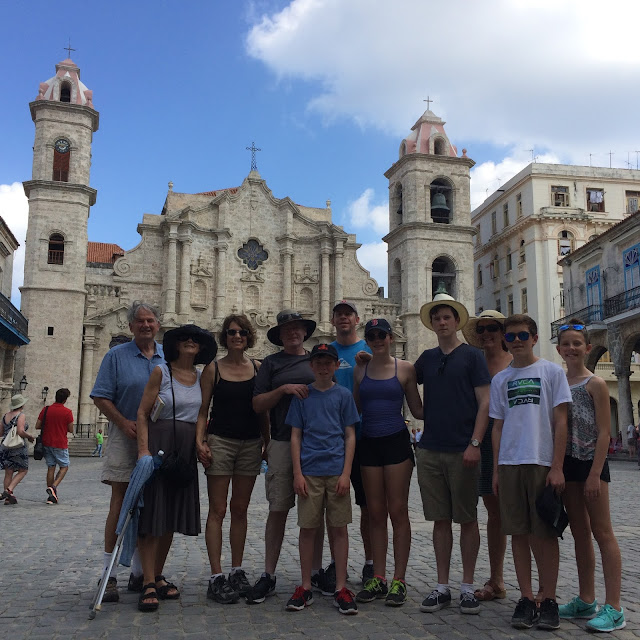 We roamed Havana for several days, then toured Vinales, the Bay of Pigs, Cienfuegos, and Trinidad. 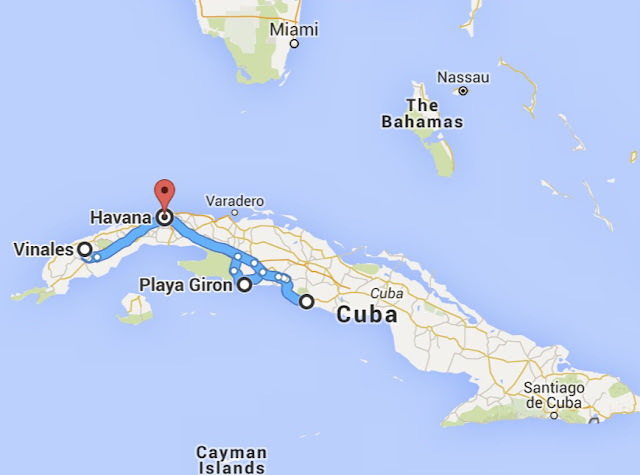 Among many highlights were the wonderful meals we enjoyed at private homes and restaurants (a welcome contrast to the poorly prepared ones at government-run resorts). The crème de la crème (we thought) was dinner at a private home in Vinales that featured rock lobster tails, chicken, and many tasty side dishes. But then in Trinidad we celebrated Alice's birthday (three weeks late) at a delightful paladar (private restaurant), Restaurante Museo. 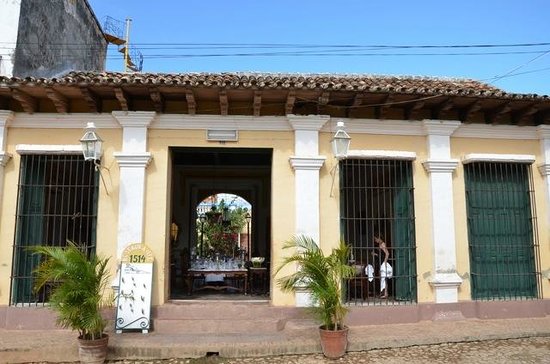 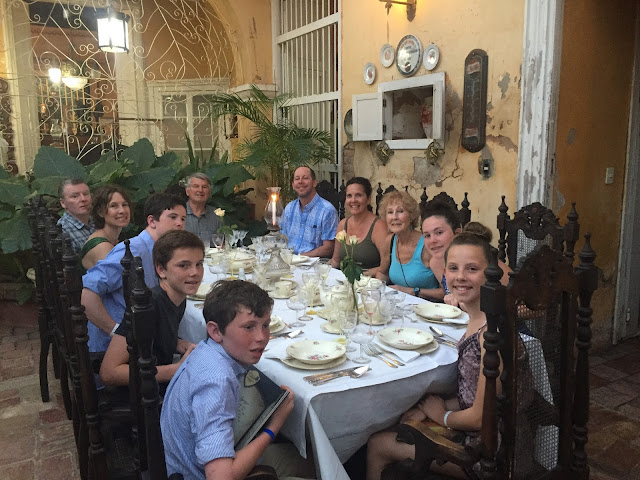 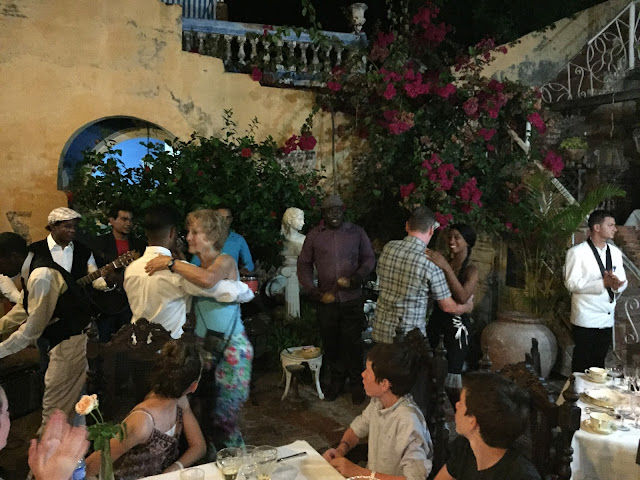 Dancing the night away!

Again lots of rock lobster tails, beautiful colonial decor, an entertaining band, and dancing with the young host and hostess (and with each other, of course). 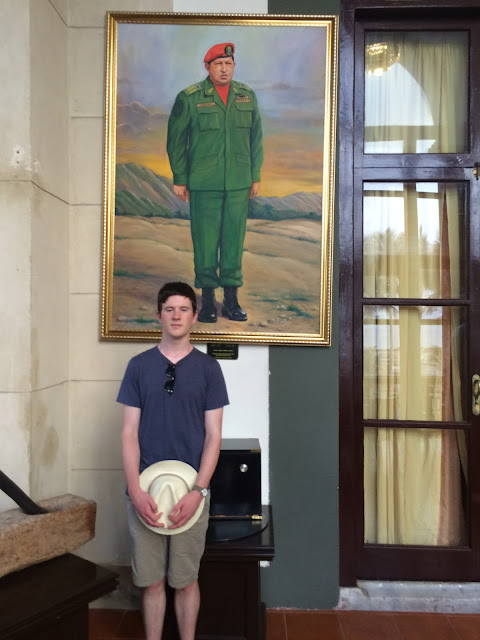 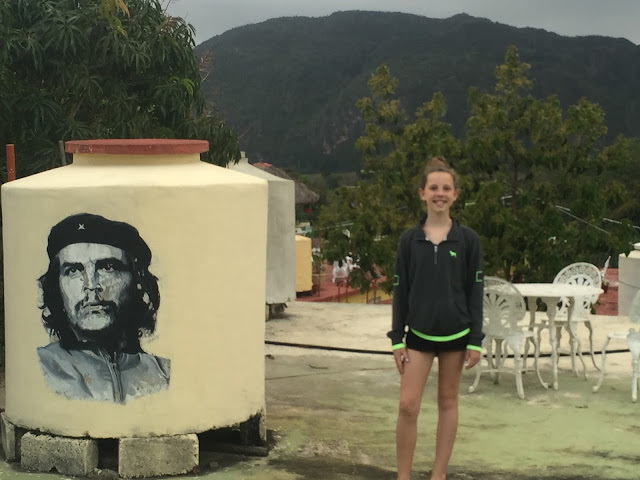 Josie with the ubiquitous Che

I had to show the Cubans how to do Cuban music right. They caught on quickly. 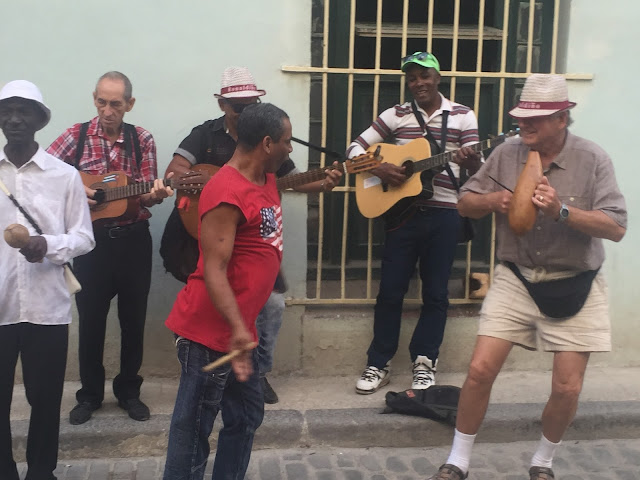 On our return, inspired by performing in Jekyll and Hyde, The Musical, last year, I coupled my limited talent and almost nonexistent acting experience with an abundance of enthusiasm and was a drag queen and cafe manager for six performances in La Cage aux Folles at the Gualala Arts Center, and various roles (political committeeman, Senator from Massachusetts, reporter, policeman, and perhaps others) in three performances of Gershwin's Of Thee I Sing at the Point Arena Theater. 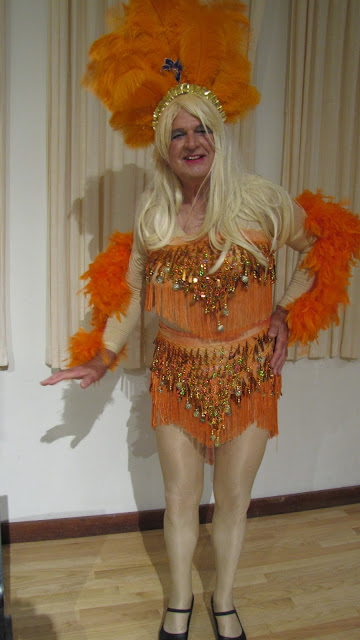 The closest thing to a compliment I received for my female impersonation was a comment in our local paper: "nice legs". Woody Allen said that 80% of success is showing up, but then someone else said that some people shouldn't show up. Either way, I sure had fun. 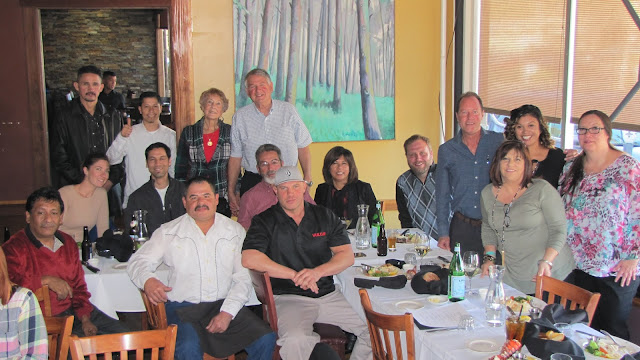 In March we go to Cabo San Lucas, then to La Paz for 15 days on a small cruise ship for snorkeling and whale watching in the Bay of Cortez, back to Cabo, then home. After our two trips before Cuba, Antarctica and the Arctic, it will be nice to leave the parkas, sweaters, and boots behind and pack modest swimsuits and plenty of sun screen.

Larry “Fact Checker” Jacobs challenged as my opinion studies by the Congressional Research Service and The Wall Street Journal reporting that “(At) an annual average rate of 2.1% growth since the end of the recession, (this is) the weakest pace of any expansion since at least 1949.” (http://tinyurl.com/htesk9m)

Mr. Jacobs, the Washington Times agrees with you that the stock market has done very well, although: “The stock market closed down for 2015 reversing one of the few positive accomplishments under the Barack Obama presidency. This has been a pretty prosperous time for the top two percent. For most Americans though — not so much.

"A new report from Sentier Research based on Census data finds that median household income of $56,700 at the end of 2015 stood exactly where it was adjusted for inflation at the end of 2007.”

“Our middle class is shrinking. Our poor families are becoming poorer, and 70 percent of us are earning the same or less than we were 12 years ago. We need new leadership.” Former Democrat governor Martin O’Malley.

Concerning the administration’s happy talk about unemployment: “What they forgot to tell you is that statistic doesn’t include those people who have given up looking for work, those people who are working part time. Add it all together and real unemployment is over 10 percent.” Senator Bernie Sanders.

Mr. Jacobs, your fact checking remains abominable (ICO 4/25/14), when you claimed a marijuana plant used less than a gallon of water/day, when experts agreed they consume 6 to 15 gallons/day.

You still can’t hold water.
Posted by Major Combs at 10:35 PM No comments:

This is a letter I repeatedly sent to the ICO in response to a letter rebutting one of mine. The ICO will not publish my rebuttal, effectively leaving the issue in favor of their position:

The letter from Dr. Jeanine Pfeiffer (ICO 12/18/15), impressed me by its misinformation, disinformation, and obvious activism. In particular, where are the studies supporting her statement that GM-crops are responsible for food insecurity for millions of farming families? In Africa, where GM is almost totally banned? In India, where cotton is the only GM crop? 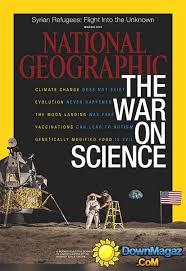 Dr. Pfeiffer, you wrote: “Agricultural policies relying solely on (GMO) … cause early deaths throughout the world.” Where? I found no studies indicating that GMO reliance on off-farm inputs caused unprecedented levels of farmer debt and suicide. Not in Africa, North or South America, Australia, or Europe. How about India, where only GM-cotton is planted? The evidence of Indian GM-caused farmer suicides is anecdotal, but studies show no correlation. India has had and continues to have a high suicide rate, but farmer suicides now are the same as prior to the introduction of GM-cotton. Scientific American finds the GMO-farmer suicide claim is false. (http://tinyurl.com/ozpgamp)

India has made great progress and rapid changes in agriculture (http://tinyurl.com/hpzez27), but necessary future progress will require GMO technology.

Dr. Pfeiffer and others suffer from “Romantic Populism,” the opposition to large commercial farming, agricultural technology, and American oil production.
They create and disseminate myths about indigenous farmers and GMO, while supporting ethanol and biofuels abominations. They fail to recognize that increased agricultural productivity, even on small farms, came from chemical fertilizers, irrigation, and hybrid seeds. (http://tinyurl.com/hnx7apj)