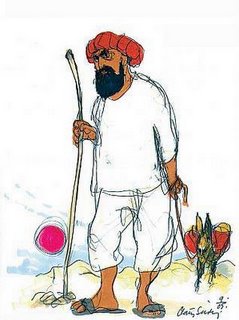 Together facing the new totalitarianism

We, writers, journalists, intellectuals, call for resistance to religious totalitarianism and for the promotion of freedom, equal opportunity and secular values for all.

The recent events, which occurred after the publication of drawings of Muhammed in European newspapers, have revealed the necessity of the struggle for these universal values. This struggle will not be won by arms, but in the ideological field. It is not a clash of civilisations nor an antagonism of West and East that we are witnessing, but a global struggle that confronts democrats and theocrats.

(The rest is here)

I urged the Editor of the Independent Coast Observer to publish the Mohammad cartoons. Then I signed a letter proposed by a frequent political adversary, Steve Finz, again urging publication of the cartoons Islamists find so offensive. Today I found that Islamists find just about everything anyone does offensive. In India Muslims are protesting against a variety of pictures, including of Mecca and animals, even on decks of cards. The first protest they made that involved force or coercion was one too many.

They can protest all they want. Damn, that's the American way! But threats mean no respect, and violence means that they are disrepecting their own religion far more than an Infidel like I could. If there is an Allah, He has got to be wondering how His work got so screwed up, especially since nothing is supposed to happen without His OK.
Posted by Major Combs at 6:08 PM

Email ThisBlogThis!Share to TwitterShare to FacebookShare to Pinterest
Labels: Islamofascism

Mike, As you know, I, too, like to point out when you are wrong. The Islamist threat is not new. Islamist have been at war with the rest of the world for about 1400 years (or at least that part with which they have had contact). It is not a religion of peace, it is a religion of forceful conversion. Maybe moderate Muslins reject the dominant teachings of Islam but I have yet to see significant evidence of that.

Sam, I agree, the Islamist threat is not new, it is just that the Western nations have been in denial -- if they live with us, they will see the light, and be assimilated and become civilized. Nope. They just figured that eventually they, Allah (peace be unto him) willing, would take over and make us all into good little dhimmis.
Muslims are really into the concept that their religion is not respected in the countries they have been flooding into, like Denmark, The Netherlands, the United Kingdom, even France. I wonder would any of them truthfully admit how disrespectfully and intolerantly Muslims treat non-Muslims (dhimmis, the "protected ones") in Muslim countries?
Muslim seems like another word for hypocrite.

Another brave person...
VIDEO:
This WOMAN is standing up alone on TV.
I admire her guts!!
Its a MUST SEE video!!

- Arab-American Psychologist Wafa Sultan: There Is No Clash of Civilizations but a Clash between the Mentality of the Middle Ages and That of the 21st Century

Lots more on this here:
http://www.somebodyhelpme.info/RIGHTEOUS_MUSLIMS/righteous.html

You might want to check this out too:
http://somebodyhelpme.info/cartoons/anti-Semitic/anti-Semitic.html