Ignorance is a strong foundation to build a belief system on, and human-caused climate change is the best example extant. I’m frequently confronted with statements that anthropogenic global warming, climate change, or now its latest incarnation, weather “weirding”, are responsible for such things as droughts, sea levels rising, hurricanes, tornadoes, floods, vanishing snow, retreating glaciers, civil war in Syria, deforestation in Indonesia, and loss of the Kilimanjaro ice cap.

My answer is always that climate change is natural, and that our current modest warming is a natural recovery from the Little Ice Age (1400-1850AD), the coldest period during the past 10,000 years. I explain that there have been five warming periods in the past 10,000 years since the end of the Ice Age. I name the periods chronologically, beginning with the Holocene Optimum 8,000 to 5,000 years ago, the Minoan, Roman, Medieval (900 to 1400AD), and finally our current warm period. I point out that each warm period does not get as warm as its predecessor, and that the warm period we are experiencing now is the least warm by far. 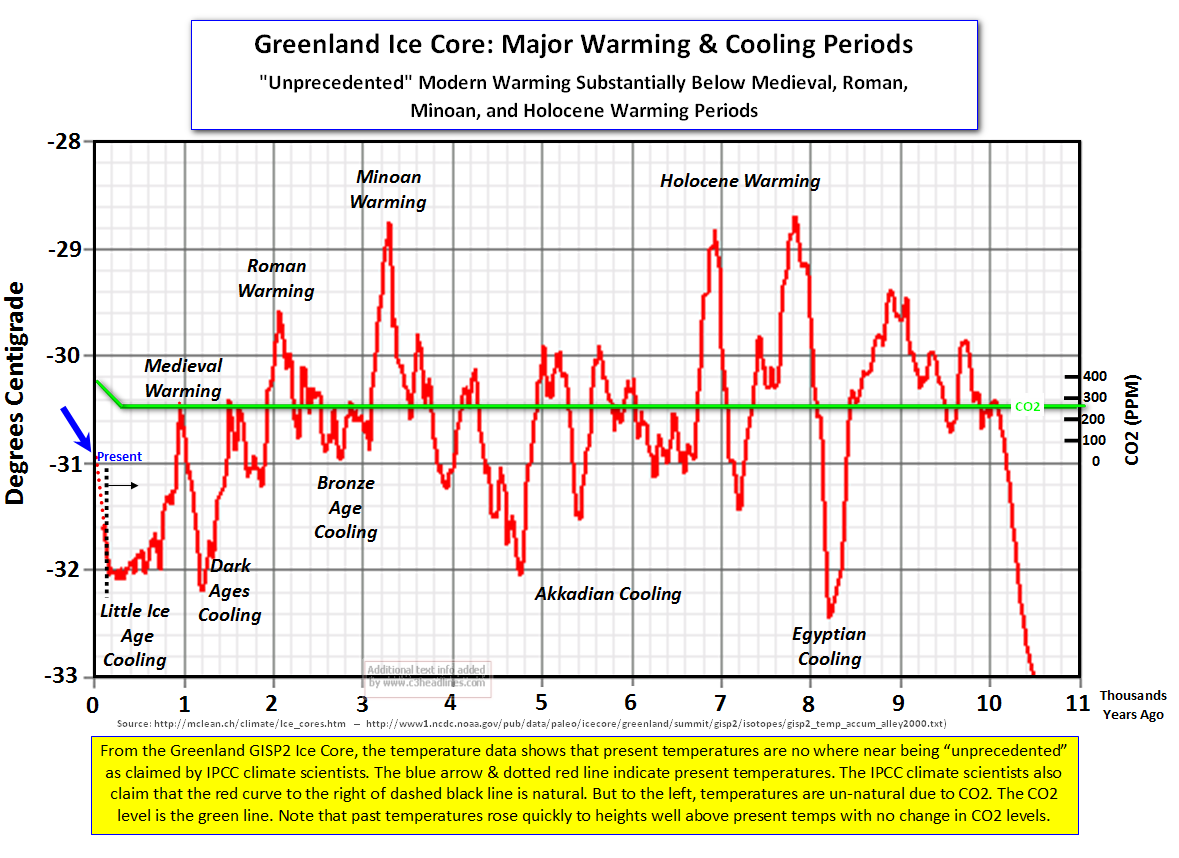 Then I throw in the Eemian warm period 125,000 years ago, and note that it was much warmer than any of the Holocene, our current warm period. By then I can see total incomprehension, so I don’t explain that the past million years have a pattern of 100,000-year cold (glacial) periods alternating with 20,000-year warm (interglacial) periods. The bottom line is that I have just given a brief lesson in natural climate change, and that the concept that climate is always changing, and often is much warmer than now, is met by dumb disbelief by my audience. “That’s not what Al Gore said!”

So then I make it simple. I show a chart of temperature in a local city, Santa Rosa, California (below). Temperature in Santa Rosa peaked in the 1930’s, and there has been a cooling trend since.

Since these temperature records are from the U. S. government National Climatic Data Center of the National Oceanic and Atmospheric Administration, I can’t be accused of oil company propaganda.

This is the Santa Rosa chart after it was recently "homogenized". The strong cooling trend of the originally recorded data has now become warming - the early 1900's are over one degree Celsius lower, and recent temperature are about half a degree higher.

Here is Ukiah, before and after homogenization. Again, a century-long cooling trend becomes warming.

They might say, so what, that’s only one city, and the Earth is overheating. Obviously they haven’t comprehended what I illustrated concerning natural climate change in the past 10,000 years, and the past million years. So then I show them a chart showing there has been no significant global warming for almost 18 years, a period where the rate of increase of atmospheric CO2 has doubled. 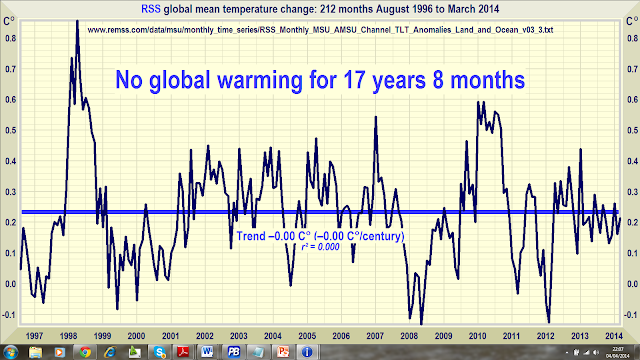 None of the climate models show that a huge increase in atmospheric CO2 does not increase warming for almost 18 years. Just the opposite. The climate models show warming accelerating, yet at this point measured temperature is below the lowest climate model projections. In science studies, when models don’t agree with reality, the models get thrown out. Since the UN still goes with the models instead of reality, that shows that science is not what the UN is trying to accomplish.

How about sea levels rising. Tide gauge records for the four largest cities on the U. S. West Coast – San Diego, Las Angeles, San Francisco, and Seattle – show that current sea level for each of them is about the same as in 1941, and that all have experienced falling sea level since 1983.

Do you see any sign of sea level acceleration in this San Francisco tide gauge record? Sea level was two inches higher at San Francisco in 1983 than in 2016, and the rate of rise is less than five inches per century. The "experts" predict sea level will rise five feet by 2100, but at the current rate sea level will not reach a five-foot increase until 3300 AD. Just in time for the next glacial period (Ice Age).

Droughts? Fewer and less severe than before 1950.

Hurricanes? Glad you asked. Fewer powerful ones, and the longest period since the Civil War that no strong hurricane has hit the U. S. 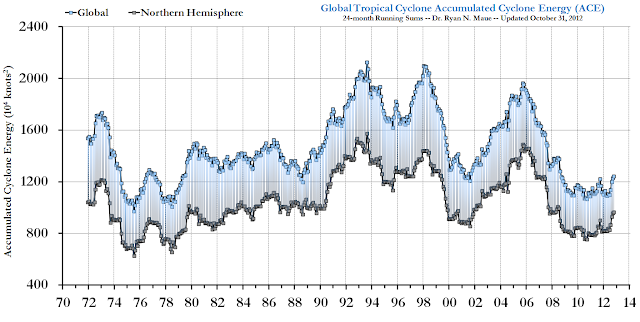 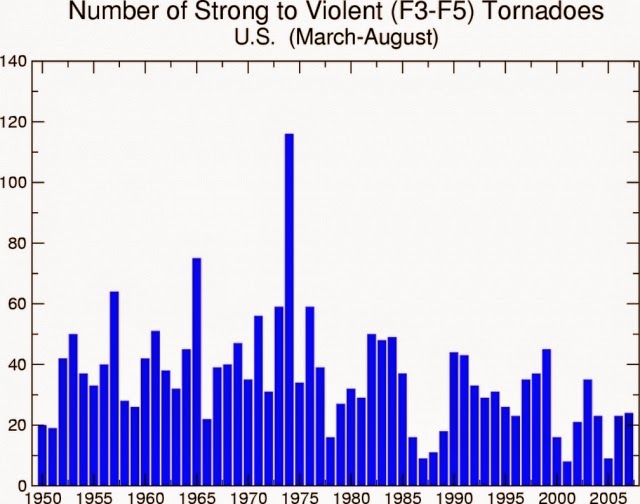 Floods? Besides the fact that floods should not have anything with global warming, there has been no trend in increasing weather-related losses. 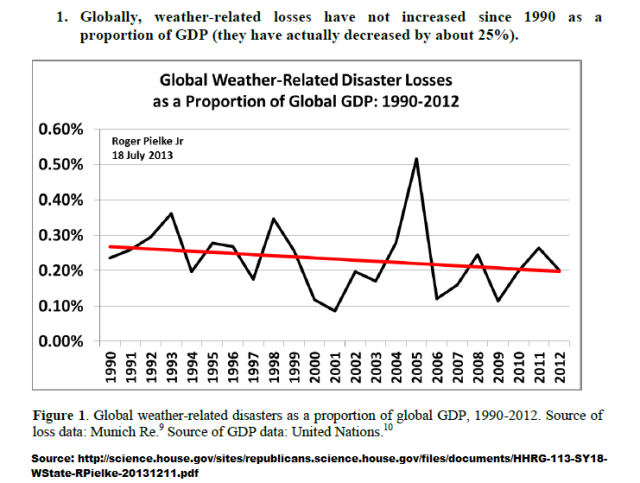 Snow? No trend of less snow.

Glacier retreat? Glaciers have been retreating since the end of the Little Ice Age, and for many glaciers, they retreated far more before 1900 than after. Seen Chasing Ice, by James Balog? James does not inform his viewers that the glacier he videoed in Greenland retreated 18 miles from 1851 to 1964, stopped retreating until 2001 while atmospheric CO2 increased steadily and dramatically, and has retreated an additional six miles since (during a period of no significant global warming).

Wildfires? The trend is going down. 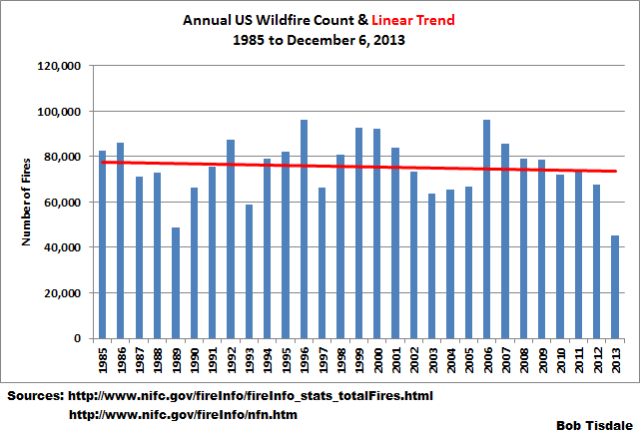 It is amazing how small an effect facts have on beliefs, such as the anthropogenic global warming/climate change religion. It should be so simple to end it. CO2 is going way up, but temperature isn't, and the climate now is nowhere as warm as previously naturally.

But it isn't. Belief dies hard, if ever.

You and your darn facts! How can you denie the existance of Eco-Unicorns?

The UN anti-thought Police want to talk to you....

Doesn't the IPCC still say that (A)GW/CC/... 's effects are not predicted to be unambiguously noticeable in the near term?
(rendering most of your graphs irrelevant)

(not defending them; just pointing out - and wondering)

DisplayName
I have observations, also called facts, presented in graphical form; the IPCC has speculation unsupported by observations. In fact, when a theory is tested by comparing it to observations, and observations do not support it, it's time for a new theory. Catastrophic anthropogenic global warming has had four decades of failure. It's time to go back to the null hypothesis, that climate change is natural, which so far has been confirmed for billions of years.