Global Climate Change in United States - Don’t look at the man behind the curtain! 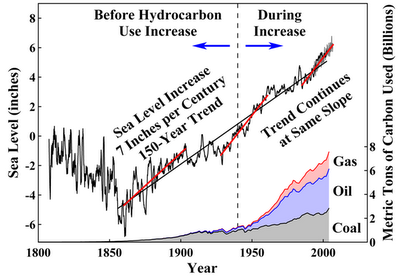 The Washington Post highlighted the work of government scientists: Climate Change Already Affecting U.S., by David A. Fahrenthold, Washington Post Staff Writer, June 16, 2009. The government report the Post examined, "Global Climate Change Impacts in the United States," covers much of the same ground as previous analyses from U.S. and United Nations science panels. It finds that greenhouse-gas emissions are "primarily" responsible for global warming and that rapid action is needed to avert catastrophic shifts in water, heat and natural life.”

In other words, it’s nothing new, except the Democrats need something to help them pass their mammoth bill to impose a cap on emissions, and government scientists and the Washington Post are eager to help.

An excerpt from the report concerning sea level rise caught my attention, since Al Gore has predicted that sea levels will rise twenty feet by 2100.

Sea levels have been rising along most of the U.S. coast over the past 50 years, increasing up to eight inches in some places. That trend is expected to continue as warmer temperatures melt glaciers and cause the ocean to expand like a wooden door on a hot day. Some of the worst-hit areas are expected to be along the East Coast, owing to a confluence of rising seas and subsiding land. Seas might rise 2.3 feet near New York City and 2.9 feet in Hampton Roads.

I found it interesting that in the past 50 years sea levels increased “up to eight inches in some places.” Why “in some places,” instead of in all places? Could the answer be found in the “subsiding land?”
As all should know, but apparently few do, sea level rise is natural, not unusual. Since the end of the last Ice Age, a mere 18,000 years ago, sea levels have risen over 400 feet, or an average of over two feet per century. Since the end of the Little Ice Ages in 1850, the average increase has been seven inches per century. If the trend “in some places” in the past 50 years continues, that would be about 16 inches for a century. How much of that is sea levels rising, and how much is subsidence?
I delved into the underlying report for an answer and found this:


Significant sea-level rise and storm surge will adversely affect coastal cities and ecosystems around the nation; low-lying and subsiding areas are most vulnerable.

High rates of relative sea-level rise have already resulted in the loss of 1,900 square miles of Louisiana’s coastal wetlands during the past century, weakening their capacity to absorb the storm surge of hurricanes such as Katrina. Shoreline retreat is occurring along most of the nation’s exposed shores. Recent estimates of global sea-level rise are 3 to 4 feet in this century, with higher relative sea-level rise in areas where the land is subsiding (sinking), including most of the Atlantic Coast and Gulf Coast of the United States.

There it is! Look to Louisiana for proof! So let’s do just that.

At “Wetland Loss In Louisiana,” we find that global warming is not the problem, and that the problem began over 200 years ago as “wetlands in the United States have been drained, dredged, filled, leveled and flooded for urban, agricultural, and residential development (Mitsch and Gosselink 1993). Because of these activities, 22 states have lost 50% or more of their original wetlands. The problem in Louisiana is somewhat different–wetland growth and deterioration have been naturally occurring here for thousands of years.”

Simply stated, the sediment deposited on the Mississippi River delta naturally compacts under its own weight and subsides. Before channels were straightened and confined with levies, newly added layers of sediment compensated for compaction and subsidence. However, manmade alterations stopped this natural process long before the specter of global warming was raised.

The same process has been identified in other deltas, such as Bangladesh, where efforts to control flooding have caused flooding problems to worsen as natural compaction and subsidence expose low-lying shores to storm surges. The storms are no stronger or frequent, and the sea level increases are normal and natural, but the natural storm barriers are not being replenished.

This apocalyptic government scientist report trumpeted by the Washington Post takes an effect – sea level increases – and assigns it an erroneous cause – manmade global warming. Sea levels are rising naturally, and have been at varying rates for the past 18,000 years. The current rate of rising sea levels has not increased, even though natural climate change has caused the United States temperature to increase about one degree Fahrenheit in the last century.

The rest of the report displays the usual unwarranted alarmism about normal climate change. It’s like the government scientists and Washington Post reporter and editors were born yesterday, and their only instructor about weather was Al Gore.
Posted by Major Combs at 4:36 PM