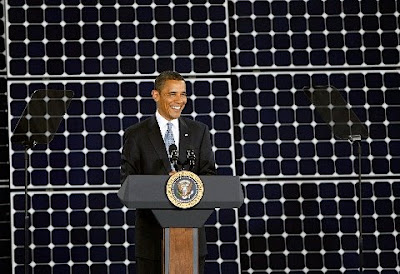 Obama poses before a bottomless money pit, also known as the huge solar installation at Nellis Air Force Base, Nevada

The New York Times has a Green Inc. section, motto: Energy, the Environment and the Bottom Line. In a May 27, 2009 article, Obama Touts Clean Energy Achievements, by Kate Galbraith, the clean energy achievement being touted by Obama was the 140-acre, 70,000 solar panel installation at Nellis Air Force Base, Nevada. The cost of this monument to taxpayer waste is $100 million to provide Nellis with about 30 percent of its electrical needs at a savings of $1.2 million per annum. Doing the math, that's an 83-year payback period, except that "Solar panels have an effective lifespan of about 20 to 25 years, and their value and wattage output decrease steadily over time."

In 20 to 25 years the solar panels will need replacement at a cost of $100 million, ignoring inflation, and will then probably be providing only 20 percent of Nellis' power needs unless Nellis is closed, shrunk, or defies modern trends and holds the line on power consumption.

If you still believe solar power is the answer, you're a Democrat or a fool (please excuse the redundancy).
UPDATE: Writing of Democrats and fools, the Nevada Democrat website reported Obama's visit to Nellis' solar extravaganza, and there I find that savings will be "almost a million dollars a year," so it's even worse than I initially reported. It seems Democrats would be trying to hide this from public view instead of publicizing it. Apparently they think everyone is as challenged mathematically as they and Obama. But let's make this very easy for them: $100 million cost divided by $1 million saved per year equals 100 years to recover the cost. Except solar cells must be replaced every 20 to 25 years.
And our President is happy about this!
Posted by Major Combs at 10:05 PM