An interesting article popped up in the Chicago Sun-Times: "Alarmist global warming claims melt under scientific scrutiny," June 30, 2007, by James M. Taylor. The article points out that much of Al Gore’s “science” in “An Inconvenient Truth” has been refuted, and that Gore, in the interests of science, should correct his errors.

Obviously, that won’t ever happen, not even when Gore is a doddering old fool still waiting for the oceans to rise 20 feet in a hundred-year period.

“Tipper, do you see it’s already risen four inches in the past fifty years? The next nineteen feet, eight inches are going to happen mighty fast, so make sure the water wings are in the SUV.”

Besides outrageous claims of rising sea levels (even the IPCC only predicts a rise of four to twenty-four inches by 2100, and the sea level rise for the past 100 years was only seven inches, about what it has been for each of the past eighty centuries), Al Gore made a big deal about retreating glaciers in his slide show.

Of course, he never mentioned that glacier retreat has been widespread all over the world since 1850, roughly a century before any significant increase in CO2, but matching very well with a natural increase in warming that started about 1850 and marked the end of the Little Ice Age.

As an aside, Al never mentioned that global temperature only increased 0.5º C (0.9º F) in the 155 year-period, 1850-2005, that thermometers have been used to consistently and, for the most part, accurately record surface temperatures (primarily in the Northern Hemisphere, and at about a third less stations since the collapse of the Soviet Union).

However, now that some glaciers are growing, I’m sure we will be told that that is a sign of global warming, too.

Be that as it may, I became interested in finding out a bit more about glaciers. In particular, is there evidence that they were stable before humanity started pumping a lot of CO2 into the atmosphere when industrialization really picked up after World War II?

For an answer, I decided to check on Norwegian glaciers, since I have always felt Norwegians are solid and dependable, and would probably be very accurate and precise in measuring and recording things in their environment. 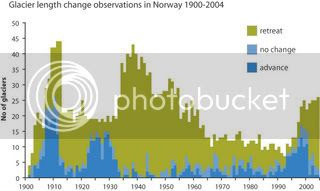 I was right. Norwegian glaciers started retreating at about 1850, and systematically recorded observations since 1900 showed that between 1900 and 1940 Norwegian glaciers were primarily in retreat. This trend continued until the present, except for a brief five-year period of advancing glaciers beginning in 1995.

Although Norwegian glaciers are just a part of European glaciers, and the mass of Asian glaciers exceeds European by a factor of 33 times, an obvious conclusion may be drawn: glacier retreat in Norway started long before increased levels of CO2 could have been the cause.

Why does Al Gore spring retreating glaciers on the public like they are a recent phenomena, when voluminous records and observations show that glaciers were in retreat for a hundred years before CO2 began its rise? 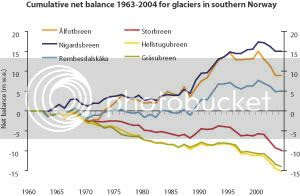 If I may have my cake and eat it too, it is also interesting to note that some Norwegian glaciers have advanced right through the period of greatest increase in CO2.

Al Gore and his cute slide show may have convinced a gullible public that global warming is a result of man-caused CO2 increases, but from all I’ve seen, the weight of evidence has come down firmly on the side of natural warming beginning over 150 years ago.

It looks like it just takes Al a long time to notice things that refute his junk science.
Posted by Major Combs at 11:01 PM