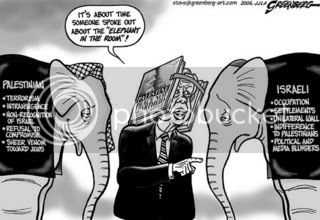 Jimmy Carter, our worst former president, and a strong contender for worst president ever, does not intend to rest on his laurels. Adding to his long list of imbecilities, his latest is that the United States is “criminal” for not treating the murderous Hamas leadership in Gaza with respect.

That the Hamas leadership in Gaza is a puppet of Iran somehow does not register in the thick and slow mind of Jimmy Carter. He probably thinks that Hamas in Lebanon is a purely nationalistic Lebanese movement, free of ties and entanglements with Iran and Syria, just as he feels that Hamas in Gaza represents pure Palestinian nationalism.

Drawing from his deep well of willful ignorance, Jimmy Carter then demands that Israel and the United States give aid to agents sworn to the destruction of Israel, even as Hamas uses each “truce” for cover to launch rockets from Gaza against Israeli civilians, and then complains bitterly of aggression when Israel takes steps to protect its citizens.

In “Jimmy Carter-think,” it is criminal for a nation to try to protect itself against attacks by terrorists staging from neighboring states.

Mr. Carter, when did you change the laws of common sense to make it wrong for a nation to protect itself from terrorist attacks? Or to make it right that the nation attacked give aid to its attackers?

Mr. Carter, you have said that every United States president since Roosevelt, including yourself, could have brought peace to the Middle East. Obviously, you made the matter much worse by your actions which resulted in the overthrow of the Shah of Iran, and the rise to power of the human rights disaster of the Iranian Ayatollahs. But don’t you realize, Mr. Carter, that the Muslim nations in the Middle East could have brought peace to the Middle East long ago it they had recognized Israel’s right to exist, as established by United Nations charter?

Don’t you realize, Mr. Carter, that neighboring states of Jordan, Egypt, Syria, and Lebanon could have brought peace to the Middle East long ago by assimilating Palestinian refugees, instead of confining them to squalid camps for six decades?

Don’t you realize, Mr. Carter, that Israel would never have occupied Gaza, the West Bank, East Jerusalem, or the Golan Heights if not attacked by the combined might of Egypt, Syria, and Jordan?

Mr. Carter, who has been attacking who?

Mr. Carter, you are the self-proclaimed champion of human rights world wide, yet you avoid pointing out human rights abuses in Libya, Saudi Arabia, Iran, Iraq under Saddam, and Syria, while continually criticizing Israel, the only Middle East democratic government. Could this be due to all the money the Carter Center and Carter Library receive from Saudi Arabia, Jordan, and the United Arab Emirates?

Mr. Carter, could you tell me the difference in freedom of worship between, for example, a Christian or Jew in Saudi Arabia, and a Muslim in Israel?

Another question, Mr. Carter: Who has the greatest political freedom, the Arab in Egypt, or the Arab in Israel?

At least you are a model of consistency, Mr. Carter. You also ignore abuses in Cuba and North Korea, and studiously avoided mentioning rampant corruption and abuses under Yasser Arafat. In fact, you put the stamp of legitimacy on Arafat when he was elected Palestinian president in 1996. I’m sure his widow is forever grateful to you for helping her late husband become one of the wealthiest men in the world while presiding over one of its poorest countries.

I hope Yasser was generous in his contributions to the Carter causes.

You’ve earned a lot over the years.

Your demand that the Shah of Iran step down and turn over power to the Ayatollah Khomeini is easily the biggest American foreign policy mistake of the past half century.

Now your constant carping in foreign capitals against the policies of the United States are undermining President Bush’s efforts to repair some of the damages which began and grew during your pathetic presidency.

Obviously, what you put asunder, you don’t want President Bush to join together.

That wouldn’t look good for the Carter legacy, would it?

Do you remember the map below, Mr. Carter?

This map of the result of the presidential election of 1980 shows what the American people thought of your presidency, and of the legacy you deserved then.

Now it's 2007, Mr. Carter, and your legacy has grown and requires two words to describe it, "meddlesome loser."