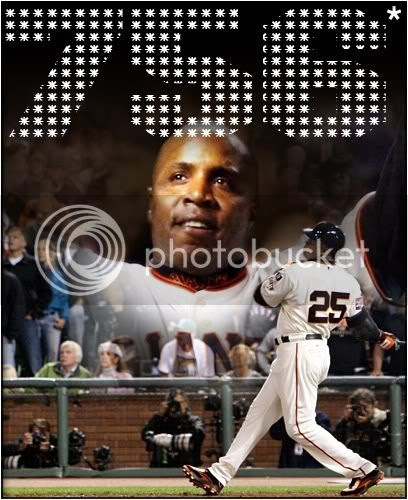 Now at 762 and still counting

My admiration for Barry Bond’s home run record just went up like a Roger Clemens rocket off Jason Giambi's bat when George Mitchell’s report of major league baseball steroid use was released.

Say what you will, but Hank Aaron never had to bat against Steroid Supermen.

I’ll go out on a limb (it’s a very thick limb) and state that the ones named are just the tip of the iceberg. As with all illegal and unethical endeavors, the first caught are the dumb and the prominent, often one and the same. Swimming below were the clever and cautious, who dove to the bottom to hide as soon as the net hit the water.

A lot of pitchers are down there. No wonder. Of all baseball players, pitchers get the greatest benefit from steroid use, because pitching is an unnatural act which places unusual stress on the pitcher’s throwing arm and legs. Pitchers also work more intensely when in the game than the other players. With the notable exception of the catcher, the pitcher is the only other player with something strenuous to do on every play when in the field.

Half a century ago I marveled that some pitchers could throw the ball 90 miles an hour. In recent years I have been flabber-foozled that many pitchers routinely throw over 100 miles an hour. Many commentators don’t even mention the now ubiquitous Juggs Gun until it starts registering pitch speed in three digits.

When they report: “He took something off his fast ball,” they now mean the pitcher dropped its speed to the low-nineties, the pitch we used to call a “Blue Blazer,” thrown by a pitcher we called a “flame-thrower.”

Now the same pitch is called a change-up.

Even more remarkable when considering Barry Bonds’ homerun record is that, unlike historical baseballing decades, where starting pitchers paced themselves and tried to pitch complete games, Bonds faced juiced pitchers who came at him in flame-throwing waves, knowing that they were only expected to go a few innings before another flame-thrower would relieve them.

It’s a tribute to Bonds that the managers of the fast-balling phenomena soon decided it was a better strategy to walk Bonds than to chance a few 100 mile per hour fast balls entering his strike zone.

The bottom line is, Bonds cheated, but he was far from being the only cheater. Certainly Hank Aaron was great in his time, in the Age of Clean Ballplayers. And certainly, as a fan, I liked his and Willy Mays’ baseball era more than this steroid-powered period. However, even then efforts were constantly being made to give competitive advantage to the homerun hitters. Pitchers over the years were not thrilled as the pitching mound was lowered and the strike zone shrank because pitchers like Juan Marichal, Bob Gibson, and Sandy Koufax got too good.

Many of Aaron’s homeruns would not have been hit if pitchers hadn’t been handicapped by changing the rules.

In an attempt to increase scores and reverse the dominance of good pitching, the American League went from being a major league to a AAAA minor league by adopting the designated hitter rule, which incidentally created roster spots for the kind of bulked up, immobile, defensive liability power hitters that steroid use produces.

Through this era of chemically crafted supermen, Bonds reigned as the most super, not the only superman. Naturally great players like Aaron and Mays would have been overshadowed by the hitters, and overmatched by the pitchers.

Maybe now, with knowledge and increased surveillance, baseball will return to being a contest of natural abilities.

I hope the fans will be content when the circus leaves and real baseball returns.

You know, sometimes they prefer circuses.
Posted by Major Combs at 3:20 PM

Email ThisBlogThis!Share to TwitterShare to FacebookShare to Pinterest
Labels: Sports