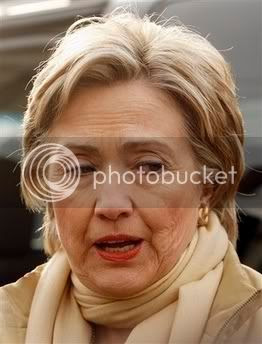 Hillary looks like she was "rode hard and put up wet."

A Strong Ox hat tip to the Drudge Report, where about 12 million will see Hillary's picture in the next 24 hours, or almost 12 million more than will see it here. It is obvious that the strain of rapidly losing support is affecting her.

It will be fun to see what Bill does and says next to "help" Hillary and hog the limelight for himself.

It's a shame to see her falling so fast. With all her baggage, it would have been fun to watch the Republican nominee go after her.

With Obama, all the Republican will be able to say will just be a repeat of what Bill Clinton is saying now.

In truth, he could say the same about Hillary, or Edwards as a matter of fact.

It looks like it's time for the Democrats to disinter John Kerrey, or bring back Big Al Gore (anyone as humongous as Al should really have their own ZIP Code).
Posted by Major Combs at 10:39 PM

"All things work together for good
to those that love God."