Our Christmas letter could be your Christmas letter, or just about anyone’s. The past year had a mix of joy and sorrow, as most do. In the spring, Alice’s younger brother Robby died of colon cancer. My oldest grandchild Leaha made me a great-grandfather when Rochelle was born in July. Until we can get together and compare notes, I’m just going to skim our highlights.


In February, Alice finally had the operation on her stomach and esophagus she wanted for years, and it worked out far better than she had even dreamed. Her reflux problem is totally gone, and the addition of fibrous foods she had had to avoid worked wonders, losing over thirty pounds in eight months. Without dieting, just eating normally – small portions, and frequent snacks.

In June we took a train trip to Boston for Alice’s niece Sarah’s Harvard graduation, and then on to Rockville, Maryland to visit dear friends. We are now Amtrack experts and advise: 1) Be prepared to be eight hours or more late. 2) Relax and enjoy anyway. 3) Bring lots of books. 4) Book the best accommodations you can afford.

I continued to pursue medical tourism, this time to Budapest, Hungary, for four dental implants. I go back in May to have the caps put on. On the way to Budapest we stopped in Brussels for a few days, and my luggage went on to Budapest by itself to wait for me to catch up. We stayed in a fun hotel in Budapest, the Gellert, and enjoyed its thermal baths almost daily. Each evening at dinner a Hungarian quintet serenaded Alice and the other pretty diners.

We got back just in time to take a three-week China tour with Alice’s father George and his fiancée Susan. China met or exceeded all expectations – the Forbidden City, Great Wall, terra-cotta soldiers, a five-night cruise up the Yangtze through the Three Gorges dam project – but our greatest discovery was the friendliness and energy of the people we met all along our journey. As Alice chided our tour director, a Chinese Communist Party member, “you’re more capitalist than we are.” From Alice and I, that is very high praise indeed. Shanghai by night, by day, by anytime, is very impressive. Hong Kong ditto. My only regret was that I never visited old Hong Kong, so when we got back we watched “The World of Suzie Wong” and got some of its flavor.

Back in Gualala now, summer-like days in the middle of November, walking on the beach and playing “Almost Fetch” with Buddy, immensely grateful for what we have, tinged with sadness for what we’ve lost, living the life we would choose if we got to do it all over again, hoping all is well with you and yours.

“It’s a grand life, it is, and far better than we expected.” We’ll take it. 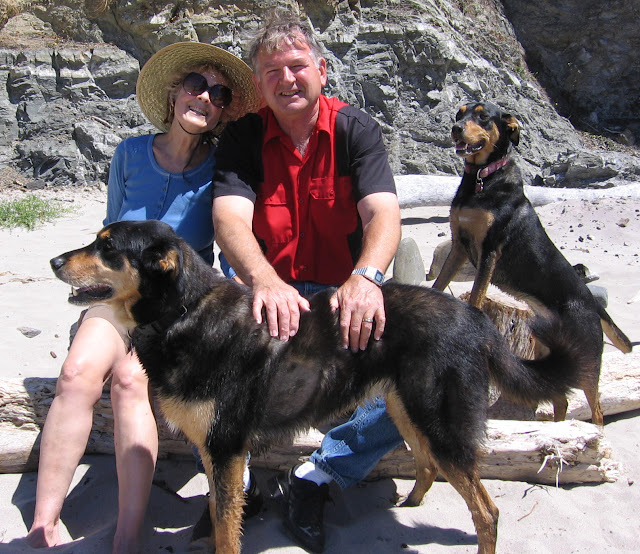 Alice, Michael, and Buddy with his little sister Duchess