The New Republic Lost in the Fog of a 'Baghdad Diarist'

Almost by accident I came across this The New Republic article on line: Fog of War, by Franklin Foer, apparently posted December 10, 2007, over four months after The New Republic published “Baghdad Diarist” articles written by Private Scott Beauchamp from Iraq. Since many aspects of the articles were so obviously fraudulent, I was amazed to find that they had passed The New Republic’s editorial muster.

At the end of 14 tortured pages, The New Republic editor, Franklin Foer, concluded:


When I last spoke with Beauchamp in early November, he continued to stand by his stories. Unfortunately, the standards of this magazine require more than that. And, in light of the evidence available to us, after months of intensive re-reporting, we cannot be confident that the events in his pieces occurred in exactly the manner that he described them. Without that essential confidence, we cannot stand by these stories.


In a weasel way, editor Franklin Foer admitted that The New Republic published garbage, but he never admitted that the critics – like me, among many – got it right from the git-go. (In the process, I beat up on the Los Angeles Times' crack columnist Timothy Rutten, the LA Times' Readers' Representative, Ms. Jamie Gold, and of course, the primary perpetrators of the unprofessional reporting, The New Republic.)

Foer never addressed the lies I pointed out about the implausible killing of stray dogs with a Bradley Fighting Vehicle.

Many of the stories told by Beauchamp seemed incredible, based on my knowledge of military procedures, but I couldn’t investigate or question all of them from my position here overlooking the Pacific Ocean on the northern California coast.

However, Beauchamp gave very detailed descriptions of witnessing a military driver enjoying using his Bradley Fighting Vehicle to kill dogs. I had a general mental picture of a Bradley Fighting Vehicle, and with a bit of Googling, I soon had a clear image of one. Then it was a simple process to compare Beauchamp’s descriptions of watching dogs killed by Bradleys with the dog killing capabilities of the Bradley.

It was so easy to sit at my computer and totally disprove Beauchamp’s stories that I was amazed that The New Republic editors hadn’t done the same.

I don’t read minds, but it occurred to me that The New Republic editors wanted to believe the stories because they wanted to cast American soldiers in Iraq in a very negative light.

Whether my mind reading is right or wrong, in any case The New Republic editors were extremely unprofessional, since they either didn’t catch the obvious lies in Beauchamp’s articles, or they ignored them in order to slander soldiers in Iraq.

Just one description of dog killing should have set off editorial alarms by anyone with the slightest nose for news – which I assume professional journalists possess as a minimum, and that editors possess in abundance.

I invite you to edit the following Beauchamp tales, armed with the following information which is readily available to any interested reader: the Bradley Fighting Vehicle has treads, not wheels, and each tread is about 21 inches wide; even a large dog like my Buddy (28-inch torso, weighing 64 pounds), would be crushed under a 21-inch tread. Now apply these facts to Beauchamp’s description of a dog killed by a Bradley.


A dog that was lying in the street and bathing in the sun didn't have enough time to get up and run away from the speeding Bradley. Its front half was completely severed from its rear, which was twitching wildly, and its head was still raised and smiling at the sun as if nothing had happened at all.


How could that be possible? A dog does not get severed by a 21-inch tread attached to a 25-ton vehicle, it gets crushed. 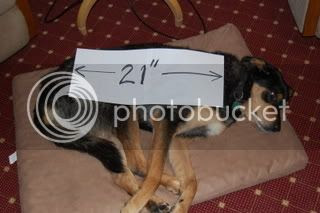 Buddy demonstrates how much of a dog - Buddy is much larger than a typical stray dog, I might add - would be covered by a Bradley tread 21 inches wide.
(A blogger features this photo of Buddy on his "Happy New Year" post, but I think he missed the point, since he wrote that I was trying to prove a dog could not be run over by a tank. Since he also ran my argument that a Bradley tread would not sever a dog's body, but would crush it, I'm not quite sure what his point was. Maybe he's making a very inside, inside joke, since the rest of his comments and those of others have nothing to do with my post.)


Beauchamp also wrote that the Bradley driver allowed a stray dog to overtake the Bradley from the right rear, then whipped the Bradley in such a way that it caught the dog in the tread and dragged it:

He (the driver) slowed the Bradley down to lure the first kill in, and, as the diesel engine grew quieter, the dog walked close enough for him to jerk the machine hard to the right and snag its leg under the tracks. The leg caught, and he dragged the dog for a little while, until it disengaged and lay twitching in the road.


If you look at the picture of the Bradley I helpfully provide below, you will notice that the driver sits low at the left front, and that he can’t possibly see a thing at the lower right rear side. 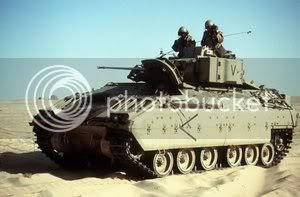 The Bradley Fighting Vehicle driver's head is barely visible in front of the hatch cover at the left front. He's in an impossible position to see a dog overtaking from the right rear.
If you find out a little more information about tracked vehicles, like the Bradley, you would also realize that tracked vehicles run over things, but don’t catch things in their treads and drag them. When a segment of a tread is on the ground, it stays on one spot until it is the rearmost segment, then it suddenly goes up and then forward. At no point does a tread drag anything, even in the unlikely circumstance that somehow, something gets caught in it.

By this time I’m sure that only The New Republic editors, and their die-hard loyalists, aka Democrats, still believe Beauchamp’s dog killing tales. However, I feel certain that these editors and die-hard loyalists remain convinced that proving some stories were lies does not prove all were lies, and that they stand by anything that can’t be proven incontrovertibly false.

However, the duty of an editor is to present the truth, not to present unsupported allegations as true until proven otherwise by others.

However, all The New Republic can present are purported statements by a few largely anonymous soldiers, which are not very reliable given that Beauchamp’s tales can be proven false in all instances where objective evidence is available.

But read The New Republic’s 14-page treatise, Fog of War, for yourself. It is a case study of half-truths, fudging the truth, and of mealy-mouthed equivocating.


And, in light of the evidence available to us, after months of intensive re-reporting, we cannot be confident that the events in his pieces occurred in exactly the manner that he described them. Without that essential confidence, we cannot stand by these stories.


Then make a retraction, damn it!

Anything less is inadequate and unprofessional.
Posted by Major Combs at 8:52 PM