Victory! A Matter of Principle

I had my day in court, and won! The officer was there, and said, among other things, that he could see the metallic buckle (or at least a reflection from it) over the top of my shoulder. I showed six photographs, similar to the one below, including one enlarged to 8 by 10.5 inches, that showed that all you could see (barely) was my hands on the steering wheel, and that the reflection of the high overcast off the windshield blocked the view of everything else on the driver's side. 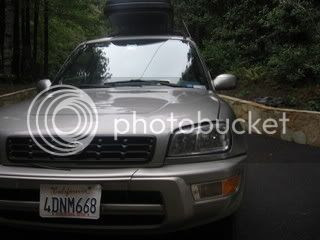 I'm sitting in the driver's seat holding the steering wheel, not wearing my seat belt.
Can't you tell?

I also brought up that the officer had noted I was wearing my seat belt when he stopped me. The judge seemed interested on that point, and confirmed it with the officer.

At the time he stopped me, he said I had put it on after he saw me not wearing it. In his report he also said that he turned after he saw me, and followed me and clocked me at 62.5 miles per hour.

However, at this point the judge remarked that all that was in question was the matter of the seat belt.

I was thinking, but didn’t bring it up, that the officer’s remarks didn’t make much sense. He said he followed me and determined I was speeding. He told me that I put the seat belt on after I saw him.

It’s bad enough the officer accused me of lying, but it’s truly an insult that he thinks I’m an idiot.

I doubt I made a friend today in court. I’ll be especially careful from now on.
Posted by Major Combs at 12:17 PM